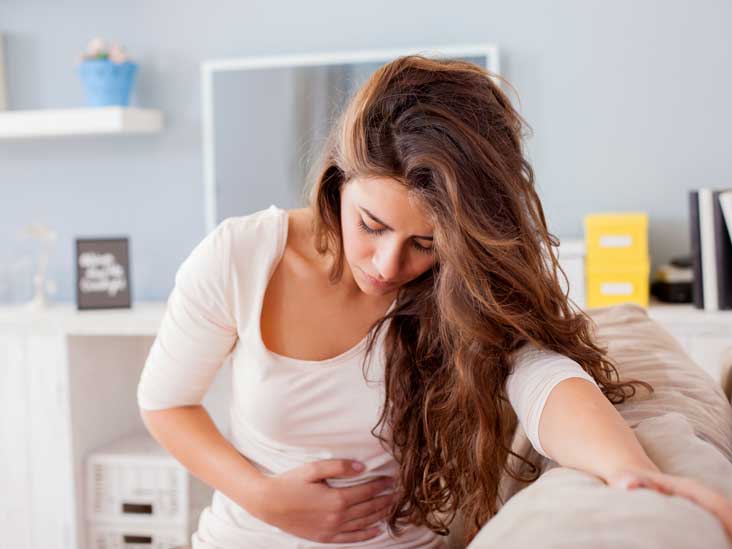 Food poisoning is an illness caused by consuming foods or drinks that contain harmful bacteria, viruses or parasites.

While many foods contain potentially harmful organisms, they are usually destroyed during cooking.

However, if you don’t practice good hygiene and proper food storage methods, such as washing your hands and keeping raw meat at the bottom of your fridge, even cooked foods can become contaminated and make you sick.

Eating foods that contain poisonous toxins can also cause food poisoning. These toxins can be naturally present in food, such as some species of mushrooms, or produced by bacteria in food that has spoiled.

Because there are many different types of organisms that can cause food poisoning, its symptoms and severity can vary ().

Moreover, the time from when you get food poisoning to when your symptoms start can range from a few hours to a few days, making identifying the offending food quite difficult.

Some foods carry a greater risk of food poisoning than others. These include undercooked meat and chicken, eggs, unpasteurized dairy products, shellfish and unwashed fruits and vegetables.

This article lists 10 symptoms of food poisoning and what you should do if you think you have it.

Abdominal pain is felt around the trunk of the body, or the area below your ribs but above your pelvis.

In cases of food poisoning, harmful organisms can produce toxins that irritate the lining of your stomach and intestines. This can result in painful inflammation in your stomach, which may cause pain in your abdomen.

People with food poisoning may also experience cramps, as the abdominal muscles contract to speed up the natural movements of your bowel to get rid of the harmful organisms as quickly as possible.

Nevertheless, abdominal pain and cramps are common and can occur for a number of reasons. Because of this, these symptoms alone may not be a sign of food poisoning (, ).

Furthermore, not all cases of food poisoning will result in abdominal pain or cramps.

Summary: Abdominal pain and cramps can occur when the lining of your stomach and intestines becomes inflamed. You may also experience cramps as your body tries to get rid of the harmful organisms as quickly as possible.

Diarrhea is characterized by watery, loose stools and defined as three or more of this type of bowel movement in a 24-hour period.

It occurs as inflammation makes your bowel less effective at reabsorbing the water and other fluids it secretes during digestion ().

Diarrhea may also be accompanied by other symptoms, such as a sense of urgency when you need to go to the bathroom, bloating or abdominal cramps ().

Read More:  A link between mitochondrial damage and osteoporosis

Because you lose more fluid than normal when you have it, you’re at risk of dehydration. Therefore, it’s important to keep drinking fluids to stay hydrated.

In addition to water, sipping liquid foods like broths and soups can help combat dehydration and give you a bit of energy if you can’t tolerate solid foods.

To check if you’re dehydrated, monitor the color of your urine, which should be light yellow or clear. If your urine is darker than this, it may indicate dehydration ().

Summary: Diarrhea consists of three or more loose, watery stools in 24 hours. The biggest health risk of diarrhea is dehydration, so it’s important to make sure you are drinking enough fluids.

People can experience them for a wide range of reasons, including stress, drinking too much alcohol, dehydration and fatigue.

Because food poisoning may cause you to become fatigued and dehydrated, it can also lead to a headache.

While the exact cause isn’t fully understood, it’s been suggested that dehydration can directly affect your brain, causing it to lose fluid and temporarily shrink ().

You could be especially prone to a headache if you experience vomiting and diarrhea, both of which increase your risk of dehydration.

Summary: You may get a headache when you have food poisoning, especially if you become dehydrated.

It’s natural for people who have food poisoning to vomit.

This happens when your abdominal muscles and diaphragm contract strongly, forcing you to involuntarily bring up the contents of your stomach and pass them out through your mouth.

It’s a protective mechanism that occurs as your body tries to get rid of the dangerous organisms or toxins that it detects as harmful.

For some people it subsides, while others continue to vomit intermittently ().

If you’re vomiting continuously and can’t keep fluids down, you should seek help from a doctor or pharmacist to avoid becoming dehydrated.

Summary: Many people with food poisoning vomit. It’s a protective mechanism that helps your body rid itself of harmful organisms you have eaten.

Those who have food poisoning often experience a loss of appetite and other symptoms common to illness like fatigue.

This happens as your immune system responds to fight the infection that has invaded your body (, ).

As part of this response, your body releases chemical messengers called cytokines.

Cytokines have many different roles, but an important one is regulating your body’s immune response to infection. They do this by telling your immune cells where to go and how to behave.

Read More:  In Brief: The Complex Relationship Between Endometriosis and Depression

In addition to helping your body fight an infection like food poisoning, cytokines send signals to the brain and cause many of the symptoms we generally associate with being ill, including loss of appetite, fatigue and aches and pains (, ).

This collection of symptoms can result in what is sometimes called “sickness behavior,” as you withdraw from social interactions, rest and stop eating.

Sickness behavior is a sign that your body is diverting its attention away from other body processes like digestion to prioritize fighting an infection ().

Summary: Cytokines are chemical messengers that play an important role in regulating your immune response. Their presence also causes some of the typical symptoms of illness, such as loss of appetite.

Fevers are prevalent in many illnesses and occur as part of your body’s natural defense against infection.

Fever-producing substances called pyrogens trigger the rise in temperature. They are released either by your immune system or the infectious bacteria that has entered your body ().

They cause a fever by sending messages that trick your brain into thinking your body is colder than it is. This results in your body generating more heat and losing less heat, thus raising your temperature.

This increase in temperature increases the activity of your white blood cells, which helps you fight the infection.

Summary: Fever is a common symptom of illness caused by harmful organisms, as in the case of food poisoning. It helps fight infection by making your body too hot for the bacteria or virus that caused the infection to thrive.

Chills can occur as your body shivers to raise your temperature.

These shivers are the result of your muscles rapidly contracting and relaxing, which generates heat. They often accompany a fever, as pyrogens trick your body into thinking it’s cold and needs to warm up.

A fever can occur with many different illnesses, including food poisoning, making chills one of its common symptoms.

Summary: Chills often accompany a fever, which can occur in cases of food poisoning. Thinking it’s too cold, your body shivers in an attempt to warm up.

Weakness and fatigue are other symptoms of food poisoning.

These symptoms occur due to the release of chemical messengers called cytokines.

Additionally, eating less due to loss of appetite may cause you to feel tired.

Both weakness and fatigue are symptoms of sickness behavior, which helps your body rest and prioritize getting better.

In fact, they can also be symptoms of many other illnesses.

So if you feel weak or tired, the best thing to do is listen to your body and rest.

Summary: Weakness and fatigue are common side effects of food poisoning. They are caused by chemical messengers called cytokines, which are released by your body when you are sick.

Read More:  The List of Languages Spoken in India

Nausea is the unpleasant feeling that you are about to vomit, although you may or may not actually do so.

While it’s normal to feel queasy in cases of food poisoning, nausea can occur for many other reasons, including migraines, motion sickness and eating too much ().

Nausea related to food poisoning typically comes on between one and eight hours after a meal.

It works as a warning signal to let your body know that it has ingested something potentially harmful. It may be exacerbated by a slowing of the movement of your bowel, which occurs when your body tries to confine the toxin in your stomach.

If you feel nauseous, you might want to try some of these natural remedies to help relieve your symptoms.

Summary: Nausea is the debilitating feeling of being queasy before you are sick. It serves as a warning signal of food poisoning.

Your muscles can ache when you get an infection like food poisoning.

This is because your immune system has been activated, causing inflammation.

During this process, your body releases histamine, a chemical that helps widen your blood vessels to allow more white blood cells to get through to fight the infection.

Histamine helps increase blood flow to infected areas of your body. Along with other substances involved in the immune response, such as cytokines, histamine can get to other parts of your body and trigger pain receptors (, ).

This can make certain parts of your body more sensitive to pain and result in the dull aches you often associate with being sick.

Summary: Your body may ache when you have an infection like food poisoning. This aching occurs due to inflammation in your body as your immune system responds to the threat.

To prevent food poisoning, be sure to practice good personal and food hygiene.

This involves ensuring your kitchen is clean, washing your hands regularly and storing, preparing and cooking food in the advised way.

Most cases of food poisoning are not serious and will resolve on their own over the course of a few days.

If you notice that you have some of the symptoms above and suspect you have food poisoning, try to rest and stay hydrated.

Seeking help from a pharmacist may also be helpful, as they can suggest medication to help ease your symptoms.

However, some types of food poisoning can be serious. If you are concerned, you should get checked by a doctor.