76% of online orders for abortion pills are made by women living in states like Mississippi, Texas and Alabama with strict laws for terminating pregnancy

More than three quarters of online requests to buy abortion drugs placed last year were made by people from states with laws that limit access to abortion, a new study suggests.

The greatest proportion of requests were made from Mississippi, where abortions are banned after 18 weeks of pregnancy, women must undergo ultrasounds and be offered to see the images and wait 24 hours after a consultation to have an abortion.

Although requests came in from all 50 US states, the were next most common in Louisiana, Alabama, Tennessee and Texas.

Ordering the abortive drugs, mifepristone and misoprostol online can provide easier, cheaper and less stressful access to pregnancy termination for all women.

Despite studies finding that this form of abortion is both safe and effective for women who order the drugs online, it’s hard to do so in the US, and most women must skirt the formal medical system and regulators if they want to order the pills.

But the University of Texas at Austin study’s results suggests that there’s a particular demand and need for these online resources in states where legal blocks to abortions overseen by a doctor are in place. 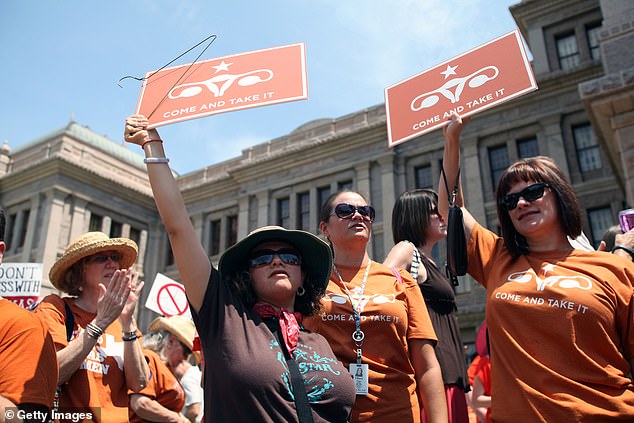 The majority of attempted online orders for medication abortions placed to one organization came from states with strict laws to limit abortion access, such as Texas, where an 11-hour filibuster by Senator Wendy Davis and protests outside the capitol failed to block a bill banning abortions after 21 weeks in the state in 2013 (pictured/file)

In the last several years, many states – mostly in the South – have been attempting to chip away at the landmark Roe v Wade Supreme Court decision that made abortion legal in the US at the federal level.

States can’t ban abortion outright, but many have passed laws that make it increasingly difficult for women to access abortions.

In the last couple of years, so-called ‘heartbeat’ bans have been proposed in several states, and passed in Ohio, Georgia and Mississippi, Louisiana, Missouri, Kentucky, and Iowa and North Dakota.

These laws make abortion illegal after a fetal heartbeat can be detected, which is possible as early as six weeks into pregnancy – at which time women may not even yet know they’re pregnant to begin with.

Each of these bans has been challenged or is currently being challenged in courtrooms. North Dakota and Iowa’s bands have been struck down permanently.

Temporary holds have been places on the bans passed in Ohio, Kentucky, Missouri and Mississippi.

The bans passed in Louisiana, Missouri, Georgia have not yet taken effect, and if Mississippi’s is struck down in federal court, Missouri’s will go with it.

Even where bans aren’t in effect, states have found other ways to make abortions hard to come by.

Texas and Tennessee, for example, have both banned abortions after 21.6, unless a woman’s life is in danger or the fetus has a ‘severe abnormality.’ 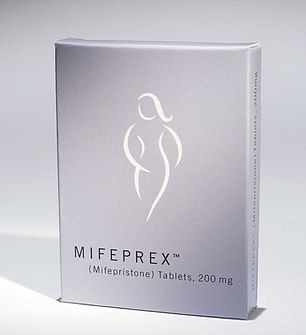 Mifepristone, used in combination with misoprostol, trigger abortions that women can manage themselves at home, but require a prescription

Women must also wait 24 hours after finding out they are pregnant to have an abortion in Texas. In Tennessee, they must wait 48 hours.

That may be prohibitive for women who work busy schedules and must travel hours from home to get to the nearest clinic that offers abortions.

But medication abortions offer a cheaper, less time-consuming way for women to abort pregnancies before 10 weeks.

In 2000, the ‘abortion pills,’ a combination of mifepristone and misoprostol were approved by the Food and Drug Administration (FDA).

The combination can safely end a pregnancy at home and is 97 percent effective.

A prescription is required to get the drugs, but with the advent of telemedicine, the necessary consultation can happen online.

During the 10-month period between October 15, 2017 and August 15, 2018, 6,022 people in the US requested orders of these medications online, according to the new study by University of Texas at Austin researchers.

Notably, this data comes from Women on the Web (WoW), an online telemedicine platform that offers medication abortions to women in countries where terminating pregnancy safely is not possible – but doesn’t sell the drugs in the US.

Read More:  Easy Boxing Workout Routines to Get You Lean and Fit

Previously, the Aid Access, run by Dr Rebecca Gomperts, provided the pills to women around the world, including the US.

But in March, the FDA issued a warning letter to Dr Gomperts and Aid Access. 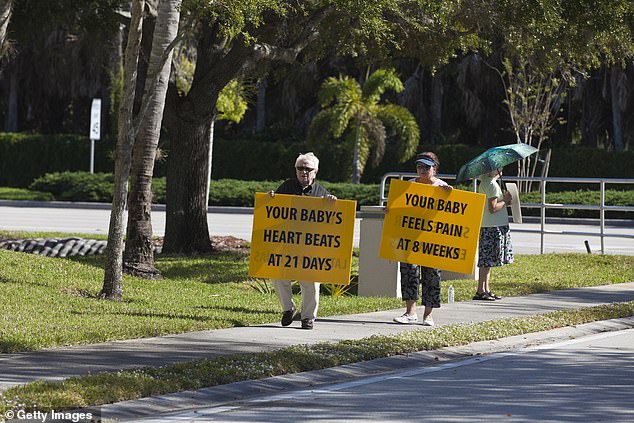 Pro-life Americans support laws like fetal heartbeat bans. Protesters have also returned day after day to Planned Parenthood and other clinics that offer abortion in efforts to deter women from using the services, as these seniors did in 2011 (file)

So although people submitted requests for the drugs, none of them were completed, according to the study authors.

The vast majority of these orders were placed by people living in states with laws that restrict access to surgical abortions.

‘These results suggest that state policies restricting access to abortion have made it harder for some people to access care in the clinic setting, and so they look online for alternatives,’ said lead study author Abigail Aiken, an assistant professor of public affairs at UT Austin.

But, she noted, people from all 50 states requested medications abortions.

And the sheer volume of requests placed to that one organization suggests that there’s a significant demand for at-home medication abortions in the US – and making it available could give women a safe option in areas where there otherwise isn’t one.