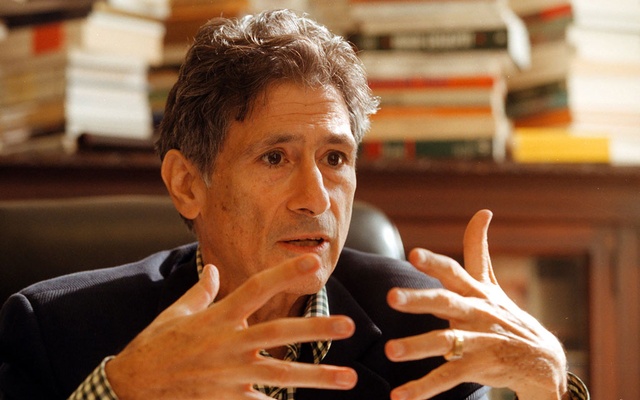 In his preface, Brennan refers instead to his book as an “intellectual biography,” which is a subtly different animal. In this case, the result is a dry, dispiriting volume, one that frequently reads like a doctoral dissertation. It’s an uninspired parsing of academic texts and agendas. What the large print giveth, the small print hath taketh away.

It hardly seems fair to fault an author for not writing a book he didn’t intend to write. Yet a sense of missed opportunity lingers over “Places of Mind.” Said (1935-2003) was an especially complicated and vivid human being, one of the most interesting and engagé men of his time.

Born in Jerusalem and educated in the United States at Ivy League schools, he was a debonair polymath, among our last true public intellectuals. The book that put him on the map, “Orientalism” (1978), is a foundational work of post-colonial studies.

Veterans of the 1980s and ’90s will recall that Said (pronounced sah-EED) was omnipresent. An urbane spokesman for the Palestinian cause, he appeared on “Nightline,” “Charlie Rose,” the BBC and anywhere else he found a perch.

Said taught literature at Columbia. His lectures were forceful; so much so that attendees would approach afterward wanting to touch him. He wrote for elite and mass publications. He was a gifted pianist who sometimes played publicly, and he wrote music criticism for The Nation.

He served as president of the Modern Language Association and played a vital role in the translation and publication in America of Egyptian novelist Naguib Mahfouz’s books, before Mahfouz won the Nobel Prize in literature in 1988.

The flow of Said’s personality helped make him who he was. He was seductive, ineluctably charming, impeccably dressed. “Can you imagine a man,” he was heard to say, “too busy to go to his tailor?”

Read More:  What can cause back pain and nausea?

A gifted mimic, he seemed to have memorised the entirety of “Monty Python.” “When he laughed,” Christopher Hitchens wrote of him, “it was as if he was surrendering unconditionally to some guilty pleasure.”

Brennan does not entirely avoid the details of Said’s life. He’s thorough, in fact, on the childhood. But in the final two-thirds of the book, the life is skimped; it’s an afterthought, pushed into corners.

Brennan teaches humanities at the University of Minnesota and writes often about comparative literature and cultural theory. His most recent book before this was “Borrowed Light: Vico, Hegel, and the Colonies” (2014).

A great deal of “Places of Mind” is spent situating Said in a firmament of thinkers that includes Marx, Freud, Jacques Derrida, Michel Foucault and Noam Chomsky. This positioning matters, but the philosophical and psycho-sociological overlay rather swamps the book.

Brennan seems to be speaking to others in his fields of expertise, not to an eager and curious general reader. A typical sentence, and let me pause to find a short one, is: “There is little doubt, though, that Said’s spatial view of music was negatively influenced by the Schenkerian method.” This book has not merely dead nodes but entire dead zones.

It’s ungainly in other ways. Its chronology is a jumble. Events that sound important — an “intellectual mugging” that Said underwent at Skidmore College — are hinted at but not unpacked. The author is a poor quoter of Said’s work.

Said’s family moved to Cairo in 1947 after the United Nations divided Jerusalem into Jewish and Arab halves. Said’s family was Christian. He was baptised in the Church of England. He attended elite schools in Cairo. His classmates included, though Brennan leaves out this information, actor Omar Shariff and the future King Hussein of Jordan.

Said’s family was wealthy; his prosperous father ran an office equipment store. For the rest of his life, Said liked Montblanc and Diplomat fountain pens and excellent stationery.

In 1951, his parents sent him to an American prep school, the Mount Hermon School in Massachusetts. He was accepted at both Princeton and Harvard but chose Princeton, Brennan writes, because it was thought to be more congenial to foreign students. He later earned a Ph.D. from Harvard in English literature.

Shortly before entering Harvard, while attending the Bayreuth music festival in Germany, Said’s Alfa Romeo rounded a turn in a mountain road in Switzerland and collided with a young man on a motorcycle, fatally injuring him.

Said gave an oddly detached account of this event in his memoir, “Out of Place” (1999), Brennan writes. “It was apparently too agonising to discuss, and he never came to terms with it.”

While at Harvard, Said tried to write a novel. He did complete a short story, but The New Yorker rejected it in 1965 and he didn’t write fiction again for the next 25 years.

At Columbia, where he began teaching in 1963, Said was the best teacher many had ever seen. He was a walking liberal education. Woe to those, however, who were ill-prepared. In Columbia’s student paper, a reporter wrote that Said commanded “the telekinetic powers necessary to eject unwanted students from his seminar rooms by sheer force of irate facial expression.”

He didn’t believe in politicising his classrooms, he said. He taught courses on literature; Joseph Conrad, especially, was an endless fascination to him. Exile was the central knot of his being, yet he never taught on the Middle East.

Said was a member, from 1977 to 1991, of the Palestine National Council, a parliament in exile. He was heckled for being in the PLO camp, for being close to Yasser Arafat until the two men fell out after the Oslo peace accords.

Read More:  Vaginismus symptoms: What is vaginismus? Do YOU have it?

Said was threatened with assassination. His office was firebombed. “Apart from the president of the Columbia,” Brennan writes, “only Said’s office had bulletproof windows and a buzzer that would send a signal directly to campus security.”

He was married twice, and had two children. Women were said to find him irresistible. Brennan writes about Said’s brief affair in 1979 with Lebanese novelist Dominique Eddé. If Said had other affairs they are unexplored here, though about his many female friends the writer Marina Warner remarks, “there were waves of them.”

Salman Rushdie, in his memoir, “Joseph Anton” (2012), spoke of Said’s hypochondria, writing that “if Edward had a cough he feared the onset of serious bronchitis, and if he felt a twinge he was certain his appendix was about to collapse.”

In 1991, Said learned he had chronic lymphocytic leukaemia, which would kill him 12 years later. He lived long enough to rail against the Patriot Act after Sept. 11; he called the legislation “the Israelisation of US policy.”

There has been so much good writing about Said’s thinking and about his way in the world — in Rushdie’s memoir, in Christopher Hitchens’ “Hitch-22,” in essays by friends and colleagues such as Tony Judt, Michael Wood and Tariq Ali, among others — that perhaps my hopes for “Places of Mind” were simply too high.—

A Life of Edward Said’