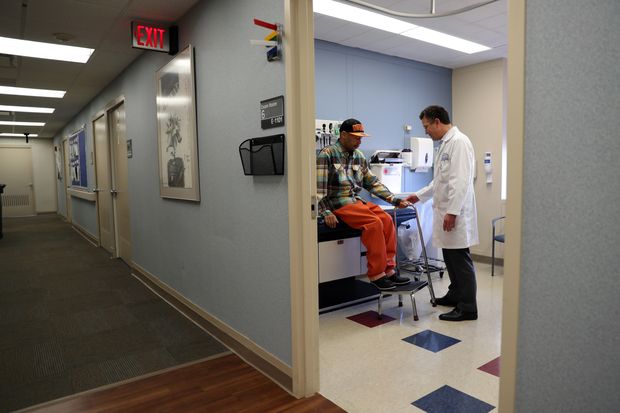 A majority of Americans said reducing health-care costs should be a top priority for the president and Congress, according to a Pew survey. Above, a doctor visits with a patient at a Detroit hospital in December. Photo: Fabrizio Costantini for The Wall Street Journal

Nine years after Democrats passed Obamacare and more than a year after Republicans failed in their effort to repeal it, health care promises once again to be a major issue in the 2020 elections.

Americans cited health care as the top issue for the federal government to address, ahead of the economy, immigration, national security and other issues, Wall Street Journal/NBC News polling found this month.

The financial burden of health care was of particular concern for American families, according to a new Gallup poll released last week, trumping worries linked to wages, college expenses, housing and taxes.

As such, health care presents an opportunity for both major parties heading into the 2020 presidential election. The state of health coverage is the one issue for which a big chunk of the polarized electorate could become amenable to whomever they see as offering the best prospect of a permanent solution, irrespective of political party.

Half of Americans say they would support paying more in taxes to assure that all Americans have health care, according to a WSJ/NBC News poll. “The American people are saying we still need this fixed,” said Lara Brown, director of George Washington University’s graduate school of political management.

And yet, health care also poses risks for the nation’s elected officials. For all those who worry about the state of health care in the U.S., an even bigger percentage of Americans—four out of five, according to Gallup—rate the quality of their health-care coverage as either “excellent” or “good.”

Because so many people are content with their own coverage, any politician pushing policies deemed too disruptive can easily lose the argument.

Democrats leveraged the issue to great effect during last year’s midterm election. They reclaimed the House and flipped seven governorships. Constituents in Republican strongholds such as Utah, Nebraska and Idaho voted to expand Medicaid.

Across 75 competitive Republican-held seats—the ones Democrats needed to win the House of Representatives—health care was a defining issue for 63% of voters, according to a 2018 election exit poll by Public Policy Polling. Nationally, polls gave Democrats an 8-point advantage on the issue.

What steps should be taken to improve affordability and access to health care in the U.S.? Join the conversation below.

Now, fearful of pushing too hard, some Democratic presidential candidates—including Sens. Kamala Harris of California, Elizabeth Warren of Massachusetts and Cory Booker of New Jersey—are distancing themselves from some ideas welcomed by their base, including a plan to provide government care to everyone, known as Medicare for All. That plan and others are seen as extreme by many Republicans and less-liberal Democrats.

While the idea of government-provided insurance is broadly popular with voters, support plummets when voters are asked if they would be willing to give up company-sponsored health care. Joe Biden, whom polls list as the current Democratic front-runner for the 2020 presidential election, hasn’t endorsed Medicare for All.

Republicans are quick to paint Democratic health-care solutions as extreme as the GOP seeks to appeal to moderate voters who don’t want a national health system upending private and employer-sponsored insurance. Republicans—and some moderate Democrats—are focused on what polls show are more palatable, incremental ideas tied free-market reforms, including price transparency and the introduction of more low-cost alternatives to health insurance.

The Trump administration is considering developing new regulations that could force doctors and hospitals to disclose publicly their secret, negotiated rates with insurers. The hope is that more transparency will allow patients to shop for better prices, which would drive down costs.

“Right now everyone is feeling frustrated because the cost is more out of your pocket than at any time in history for most,” said Mr. Walden. “They see list prices and news stories, and it scares them.”

The GOP is also struggling to corral its more extreme wing into a consensus over health care. President Trump’s White House wants to kill the Affordable Care Act, the signature achievement of former President Obama, but many congressional Republicans would rather the president leave the issue to rest, citing the risks of scuttling the ACA.

The law is now a significant part of the U.S. health-care system, and support for the law reached a peak of 55% when Republicans sought to dismantle it last year. Support for the law currently stands at 50%, according to an April 2019 Gallup poll.

Arizona last year elected its first Democrat to the Senate since 1988 over promises to bolster Obamacare, and Democrats who pledged to protect health-care coverage won House seats in the deep red states of Georgia and Oklahoma.

Everyone agrees costs for consumers have soared. Drug prices are climbing faster than inflation, a big reason workers’ out-of-pocket expenses for health care leapt 53.5% between 2006 and 2016, according to the Economic Policy Institute. Today, as costs continue to rise, spending on health care makes up nearly 18% of U.S. gross domestic product, more than double health care’s share in 1980.

All told, 69% of Americans said reducing health-care costs should be a top priority for the president and Congress, according to a 2019 Pew survey. The number has risen steadily from 59% in 2014.

Those without coverage are struggling amid those soaring costs. Those who have coverage are scared of losing it. Fewer than one-third of Americans are confident lawmakers can work together to come up with a bipartisan solution, according to the Kaiser Family Foundation.

Obamacare lowered the number of those without insurance, with red states seeing some of the biggest benefits. But costs continue to rise, even as some people still struggle to get access to care, creating the perpetual sense of crisis.

As a result, Republican-leaning states such as Utah are moving to vigorously roll back the law, welcoming plans that have skimpier benefits but cost less, for example. States such as Arkansas, Kentucky, New Hampshire and Indiana have gotten federal approval to require people who get Medicaid benefits to work, although courts have blocked some of these measures.

Blue states, meanwhile, are swinging the other way and looking to protect and expand the ACA. In California, newly elected Democratic Gov. Gavin Newsom asked the Trump administration to support a statewide government health plan. He is proposing letting unauthorized immigrants under age 26 enroll in the state’s Medicaid program.

New Jersey last year adopted an insurance requirement after Republicans in Congress eliminated the ACA’s penalty for not having coverage. Washington is set to let residents buy individual plans on the ACA exchange from insurers under contract with the state, making it the first so-called public option.

“After nearly a decade, we find ourselves debating the same issue: how to make health care more affordable to more Americans,” said Rep. Tom Cole (R., Okla.) in a recent hearing on Capitol Hill.

Write to Stephanie Armour at stephanie.armour@wsj.com