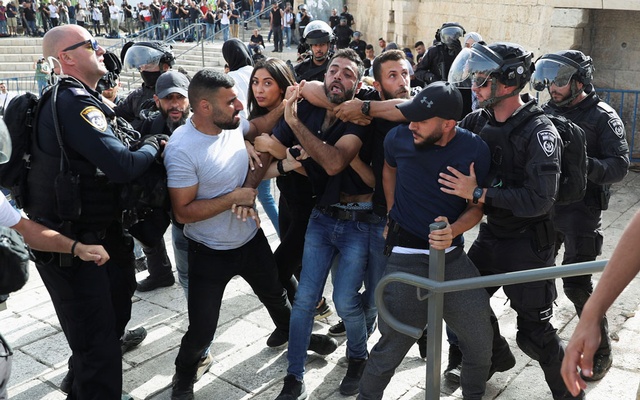 The foreign ministry issued a media statement on Monday condemning the attacks “of terrorist nature and violence unleashed on the innocent devotees and civilians”.

It also condemned the eviction of Palestinian families in the Sheikh Jarrah neighbourhood and transfer of civilian population into occupied territories by the occupying Israeli forces.

These exposes the “severe violation of humanitarian norms, human rights and international laws and accords and provoked the feelings of repressed people all over the world”, the statement sad.

The Palestinian Red Crescent Society said more than 180 Palestinians were injured in the violence, of whom more than 80, including one person in critical condition, were transferred to hospitals.

“Bangladesh urges the international community to take sustainable measures to end such kind of attacks of terrorist nature, stop confiscation of private properties in occupied territories through the policy of apartheid and the measures of terror which may be  tantamount to war crimes in the occupied territories,” the statement said.

Al-Aqsa, Islam’s third-holiest site, has been a focal point of violence in Jerusalem throughout the Muslim holy month of Ramadan. The clashes have raised international concern.

Tensions were particularly high as Israel was marking Jerusalem Day, its annual celebrations of the capture of East Jerusalem and the walled Old City that is home to Muslim, Jewish and Christian holy places.

The foreign ministry said: “Bangladesh reaffirms its position in favour of establishing a State of Palestine on the basis of a two-state solution with the pre-1967 borders and East Jerusalem as its capital.”

“Bangladesh firmly supports the inalienable rights of the People of Palestine for a sovereign and independent homeland in a viable Palestine State and territorial integrity as established through various UN resolutions.

“Bangladesh reiterates its steadfast position to a lasting solution to the Palestinian issue by engagement of both sides in dialogue to reach an agreement so that peace is attained for the peoples living in the area.”