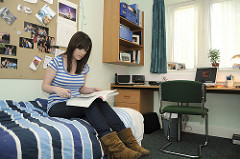 by University of Leicester

ST. LOUIS — At the start of an open discussion on the use of agents in international student recruiting, some leaders of the National Association for College Admission Counseling suggested not so subtly that it was important for those at the annual meeting here to remember that the association’s standards evolve.
Scott Anderson, director of outreach for the Common Application and chair of NACAC’s Admission Practices Committee, noted that the association’s ethics code has sometimes been amended to create exceptions, such as those that allow colleges that award athletics scholarships to do so under national norms for such scholarships, but in violation of some NACAC standards (had the exemptions not been added).
Steve Syverson, a former chair of the Admission Practices Committee who is vice president for enrollment at Lawrence University, noted that at one point NACAC members were deeply skeptical of independent counselors (those hired by families, not schools or colleges), but that such counselors are now widely seen as a crucial part of the field and are well-represented at NACAC gatherings.
But despite the message that times change and standards sometimes evolve, most of the speakers here from the rank-and-file of the association advocated that NACAC stick to its current policy barring colleges from using commissions to pay anyone to recruit any students. Many here said the issue represents a crucial choice.
“This goes to the heart of the tension we’ve been experiencing for many years, which is what is the nature of what we do” in admissions, said Philip A. Ballinger, assistant vice president for enrollment and admissions at the University of Washington. The tension, he said, is a divide between viewing admissions as “connected to the educational mission” of academe and viewing admissions as “essentially sales.”
With a few exceptions, many endorsed that view — and suggested that it was wrong to work with international agents who are paid on commission. But many also said that they saw an increasing number of colleges ignoring the NACAC standard and signing up to use international agents. And some who defended the use of such agents said that in fact many of them are providing ethical and essential services to colleges and students — and that ethical issues are raised by not dealing with agents.
Use Grows
Until recently, the use of agents paid on commission to recruit international students was considered taboo by most American colleges. But in the last two years, that reluctance has weakened as major companies that have helped British and Australian universities attract foreign students have started promoting themselves in the United States. This has happened at the same time as many colleges in the U.S. have decided that attracting more foreign students is a key goal — in no small part because many of the most coveted foreign students pay full freight to enroll.
The relevant portion of NACAC’s Statement of Principles of Good Practice doesn’t even use the word agents or refer to international students. It simply states that all NACAC members “agree that they will not offer or accept any reward or remuneration from a secondary school, college, university, agency or organization for placement or recruitment of students.” When it comes to domestic students, federal law bars such commission-based pay. But that law doesn’t extend abroad, which is why colleges that use agents aren’t violating the law, even if they are violating NACAC’s ethics code.
Many here said that NACAC’s lack of distinction between foreign and domestic recruiting was laudable. “If it’s wrong here, why is it OK overseas? International students are not here for your benefit,” said one counselor. There were repeated references to agents reducing foreign students to “bounty” or viewing them as “cash cows” or “commodities.”
There was anger at the idea that NACAC could respond to the growing number of colleges ignoring its standard by changing its rules. One member gave an impassioned speech in which he said: “It is wrong to pay a commission. If you are a member of NACAC and doing it, you should resign. It’s that simple…. You are acting unethically if you don’t adhere to the practices.”
Many of the strongest statements against the use of commission-paid agents came from independent counselors, who noted that because their fees (paid by students’ families) are based on time or service provided, and not a commission paid by the college, they have no incentive to encourage a student to consider any one college over another. That disappears in a commission-based system, they said.
Mark Sklarow, executive director of the Independent Educational Consultants Association, said that “when someone in China or Latvia knows that they are going to get paid for sending a kid to one of these five or six colleges” that are paying his or her commissions, “and in fact that Number Six will pay twice what College Four will pay, there is no question that when your meal depends on that commission, the best interest of the kid has been left behind.”
Laura M. Oliveira, vice president of enrollment at Salve Regina University, went so far as to question why companies that use agents are allowed in the exhibit hall at the meeting, as they are. If the “business model is based on commission-based recruiting,” she said it was wrong for NACAC to welcome the companies. “NACAC has to look at its own practices.”
Mark Shay, U.S. regional director for IDP, one of the leading companies with global networks of agents, had the unenviable task of being the only identifiable representative of agents in the room. He argued repeatedly that critics of commission-based agents inflate the significance of the commission when paying for performance is common in the admissions world (and is not controversial if commissions aren’t involved).