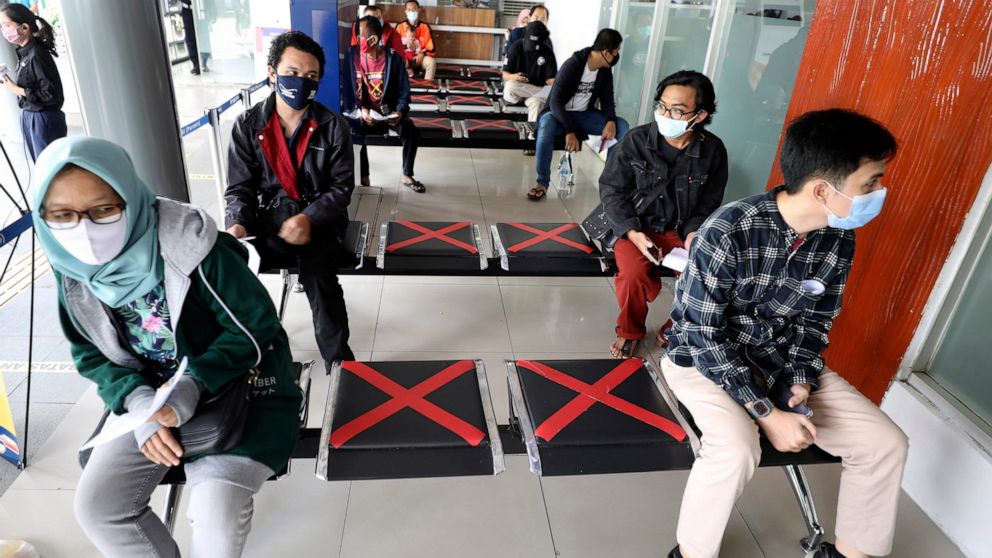 Cases continue to rise across the world’s fourth-most populous nation as testing remains sharply limited and businesses continue to reopen. The health ministry announced 1,525 more cases on Monday, bringing the country’s confirmed total to 100,303. The actual number is thought to be considerably higher because of the low testing and other factors.

“Today the Indonesian nation has reached a psychologically significant number, which is 100,000, and this reminds all parties that Indonesia is still in a state of crisis.” National COVID-19 Mitigation Task Force spokesman Wiku Adisasmito said. “We must not be careless in dealing with COVID-19.”

While neighboring countries imposed lockdowns and closed their borders, Indonesia’s leaders attributed an apparent early success with the pandemic to prayer and took few precautions against the virus’s spread across the vast archipelago nation until the first official cases were confirmed in early March.

As the virus began to quickly spread — especially in metropolitan areas — the government instituted a lockdown in six regions of the country.

Those restrictions began to be slowly lifted in early June. Malls and restaurants reopened after installing plastic shields and implementing temperature checks, flights restarted across the country, and motorcycle taxis resumed operations with plastic shields separating drivers from their customers.

But owners said they know of no foolproof ways to prevent the spread of the virus in their businesses.

“As a businessman, we are only able to take such actions,” said Jakarta coffee shop owner Amir Faisal, who installed acrylic shields at his cafe’s tables.

Some health experts remain critical of the government’s decision to reopen businesses.

“The government is only thinking about the economy, not the cases. The increase in people’s activities, gatherings, and work are potentially increasing the numbers,” said epidemiology expert Pandu Riono from the University of Indonesia.

Indonesia surpassed 50,000 confirmed cases at the end of June, with the government saying the increased number of infections were linked to workplaces such as offices and factories. Less than a month later, the number has doubled.

“I also don’t know when the peak will come. Seeing fluctuating developments, there are areas that have decreased cases, some have increased,” said Doni Monardo, chief of the COVID-19 task force.

Testing for the virus remains at one of the lowest rates in the world. In rural parts of the country test results can take days to get back. Some sociologists say a lack of coordination between the national and local governments has led to missteps.

“There is a communication problem regarding the dissemination efforts from the government to people in society,” said Daisy Indira Yasmine, a sociologist at the University of Indonesia. “While the government is trying to tell people to follow health protocols for COVID-19, there is a gap and distortion between them.”

There are cultural barriers as well. Prayers are still being held at mosques across the country, leading to new outbreaks. Religious burial customs have led to the bodies of victims being seized from hospitals, leading to what the government calls “corpse clusters.”

The government has given no clear sign of how it plans to control the spread of the virus and has canceled daily televised briefings as it turns its attention to vaccine development.

Foreign Affairs Minister Retno Marsudi said last week that the government is aiming to get access to vaccines when they are developed through partnerships with at least three pharmaceutical companies in other countries.

“We are working in parallel with various parties to get the fastest access to vaccines,” Marsudi said.

But with a viable vaccine and adequate production for the entire population at least months away, some health experts aren’t sure relying on a vaccine is the right move for Indonesia to get its outbreak under control.

“It seems like we want some magic here to solve the pandemic by finding a vaccine. But the vaccine is actually not the only solution,” Riono said.

Instead, he said, the government should prepare ways to control potential new clusters of infections.

In Jakarta, which continues to have one of the highest rates of confirmed daily infections, attitudes toward the virus have become more lax. Some cafes are crowded and don’t enforce recommended spacing between customers, malls have more people without masks, and travel is becoming easier between parts of the country.

“When the government lifted the restrictions, people started gathering around the places that previously were closed, such as mosques and working places,” Riono said, citing the rise in cases in Jakarta.

A patient who recovered from COVID-19 but lost his mother-in-law on April, Simon Nainggolan, said Indonesia is still far from the end of its outbreak.

“People who need to do their work should be more careful about health protocols,” Nainggolan said.

The Associated Press Health and Science Department receives support from the Howard Hughes Medical Institute’s Department of Science Education. The AP is solely responsible for all content.