A Crohn’s disease patient reversed his painful condition with a vegan diet, doctors have claimed.

There is currently no cure for the agonising condition, which can cause diarrhoea, abdominal pain and weight loss.

However, drugs can help some patients can achieve clinical remission – when the disease is no longer active but a flare-up could still occur.

But one unidentified man’s symptoms completely disappeared after he cut animal products from his diet, after drugs failed to help.

A doctor said the case study provides ‘hope for thousands of people’ and hailed food as medicine with the life-long disease who rely on medication.

However, other experts warned against a plant-based diet, insisting there is not enough evidence it will help.

Critics of the case report even said a vegan diet could even exacerbate nutrient deficiencies in Crohn’s patients. 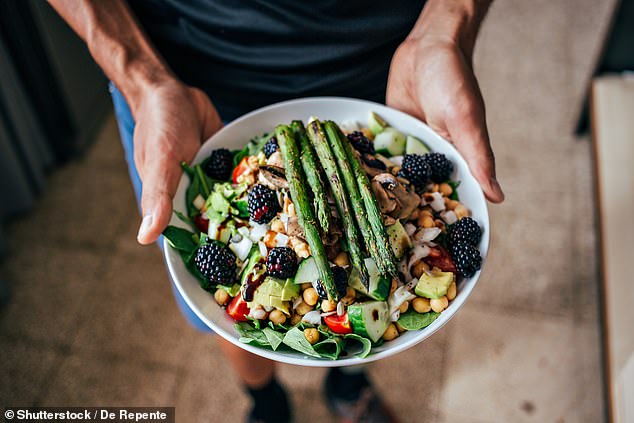 Doctors have hailed ‘food as medicine’ after reporting a Crohn’s disease patient reversed his painful condition with a vegan diet. Stock photo

The case study was published by medics at the Kirksville College of Osteopathic Medicine, Missouri, in the journal Nutrients.

Dr Kelsea Sandefur, the author, revealed the man had been diagnosed with Crohn’s disease in November 2014 at the age of 25.

He experienced months of weight loss, diarrhoea and flu-like symptoms, and an examination showed severe inflammation in the gut.

Treatment began in January 2015. But after a year, tests still indicated his disease was mildly active.

According to the doctors, only about 10 per cent of traditionally managed Crohn’s disease patients achieve long-term remission.

The man was still experiencing fatigue, bloating, and severe abdominal pain two years into treatment with infliximab, a strong medication.

At this point, in March 2017, the patient removed all animal products and processed foods from his diet for 40 days for religious reasons.

Prior to this, his diet had been typical of an American, consisting of meat and dairy products every day, refined grains and processed foods.

The man claimed to have experienced a total absence of symptoms by eating mostly grains, legumes, vegetables, and fruits.

He also said he was simultaneously trying to reduce stress by doing yoga, weight-lifting and running.

When he failed to stick to his diet, his symptoms would flare up, particularly fatigue, nausea, bloating.

Tests six months later showed complete healing of the linings in his gut, and after 18 months, the patient was able to stop taking medication.

He claims to have had no relapses since.

The study authors noted a plant-based diet is high in fibre, which promotes overall gut health by feeding good bacteria in the gut.

The man, who has not been named, was diagnosed with Crohn’s in November 2014. Test results from a colonoscopy show inflammation in his gut (pictured)

She said: ‘This case study offers hope for hundreds of thousands of people suffering from the painful symptoms associated with Crohn’s disease.

‘This case study supports the idea that food really is medicine. Not only does it show that eating a high-fibre, plant-based diet could help lead to Crohn’s remission.

‘But all the “side effects” are good ones, including a reduced risk for heart disease, type 2 diabetes, and certain types of cancer.’

The NHS and charities such as Crohn’s and Colitis UK say there is no evidence to suggest a particular food or diet can cause – or cure – inflammatory bowel diseases.

In fact, they mostly advise against high fibre foods because they are difficult on the intestines which may be narrowed due to inflammation.

A vegan or plant-based diet could also lead to mineral and vitamin deficiencies, which patients with Crohn’s are already at risk of.

Dr Megan Rossi, a research fellow at King’s College London and founder of The Gut Clinic, told MailOnline: ‘If you have very active Crohn’s, weight can be an issue and affect overall health. A really strict diet like veganism can make them even more malnourished.

‘We certainly believe diet plays a role in this disease and we would always recommend a diet with less processed food.

‘But whether they need to go 100 per cent plant based there is not enough evidence to support and is not very achievable.

‘This report is quite extreme in that it only looks at one person and may not send the right message out. We need to make sure people don’t stop their medication.’

While a whole food diet has previously been proposed as a successful tool to manage Crohn’s alongside treatment, there are no human intervention studies.

A spokesperson for Cohn’s & Colitis UK, leading the drive to find the best treatments for the disease for more than 30 years, said: ‘Whilst it is good news that this diet has worked well for this individual, unfortunately Crohn’s Disease and Ulcerative Colitis are very individual conditions and what works for one person may not suit another.

Read More:  12 Mistakes to Avoid on a Vegetarian or Vegan Diet

WHAT IS CROHN’S DISEASE? 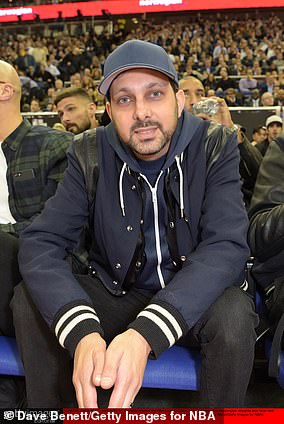 Magician Dynamo is known to have Crohn’s

Crohn’s is an agonising digestive condition that blights the lives of 115,000 people in Britain and as many as 1.6 million in the US.

Crohn’s is one of the two conditions known as inflammatory bowel diseases (IBD), with the other being ulcerative colitis.

Fatigue, can also occur for a variety of reasons, including anaemia, vitamin and mineral deficiency, medication side effects, poor sleep or low mood.

There’s no clear cause or cure for Crohn’s. Some things believed to play a role are genetics, a problem with the immune system, a stomach bug or an unbalanced gut.

Treatment can help reduce or control the symptoms. Medicines, in either tablets, injections or steroid tablets, work to reduce inflammation and stop it from returning.

Many people will end up needing surgery. For example, inflammation can cause the wall of the intestines to thicken, preventing digestion, and many need surgery to remove a small part of the intestine removed.

There is no proven specific diet for Crohn’s. There are, however, diets which can ease symptoms. The most frequent dietary change is a reduction in fibre and indigestible foods.

Specialised liquid formula diets are used to rest the bowel and improve nourishment. They are used especially in children where maintaining growth and weight is very important.