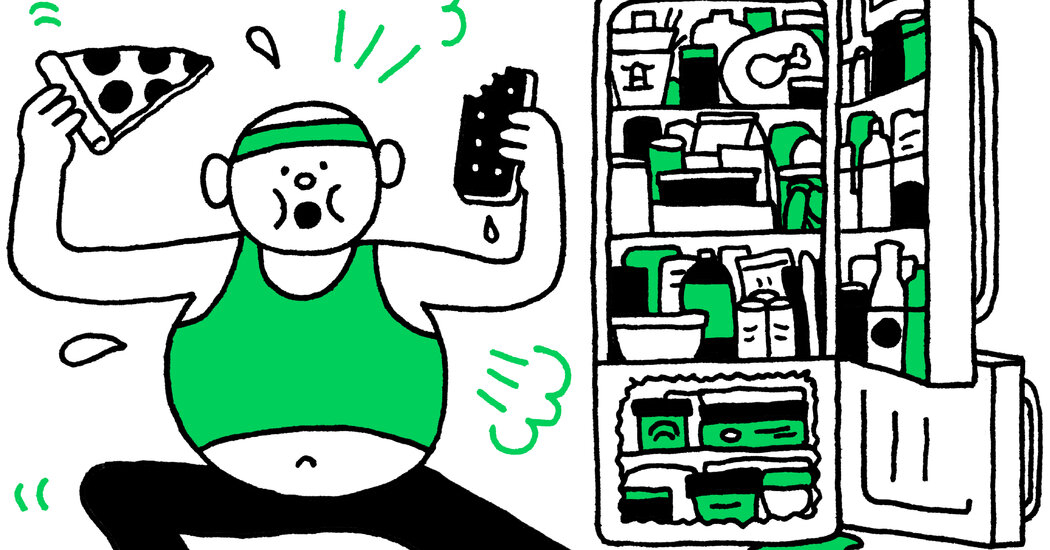 With the explosion of lockdown-friendly home exercise programs and advice, it may seem as if it’s never been easier to work out at home. But the reality is, it’s probably never been harder. For every person posting a sweaty “crushed it” selfie on Instagram, there’s another one (or four) just trying to endure pandemic-induced stress. Add in constant access to the refrigerator and a pantry overstocked with panic buys, and the guilt about what we’ve eaten — or the exercise we haven’t done — piles on faster than you can say “Quarantine 15.”

“So you’ve gained weight,” said Elyse Resch, a nutrition therapist. “So what? You’re alive. We’re doing the best we can with the resources we have.” (Not to mention many others straining under severe challenges, like significant health concerns and financial worries.)

You, too, can shrug off minor or moderate weight gain or the loss of your pre-pandemic fitness level. Read on.

Above all, have compassion. “I don’t think most people change their minds by being yelled at or punched in the face, but that’s how we talk to ourselves,” said Phoenix Jackson, a clinical psychologist who specializes in trauma. When Ms. Jackson is having trouble speaking to herself as kindly as she might a beloved friend, she likes to find a photo of herself as a child and think of how gently she’d like that person to be spoken to.

Next, recognize that weight and ambitious exercise regimens may offer the illusion of control in a world that seems out of control, but the anxiety they produce is not helpful. This is part of a larger problem: Most of us feel pressure to achieve or maintain a certain body size because we’ve been taught that it’s important. Excess weight has been linked to considerable health risks, though it does not, by definition, mean a person is unhealthy. Unfortunately, fatphobia promotes just the opposite: Fat people are denied health care, earn less money at work and have a harder time finding work in the first place, research has shown.

“Break the cycle by asking yourself where you learned that weight gain was something to be ashamed of,” Paula Freedman, a clinical psychologist who specializes in eating disorders, wrote in an email. Ask: Does this belief help me be the type of person I want to be? (Dr. Freedman added that you may have to break this down further: What type of person do I want to be? How do I want to treat myself and other people?)

Christy Harrison, a nutrition therapist who examined the issue of excess weight and the virus in a Wired article published in April, said in an interview last month that few of the early research studies on the matter controlled for race, socioeconomic status or quality of care — “social determinants of health that we know explain the lion’s share of health disparities between groups of people,” she wrote. Nor did they control for how doctors’ biases influence the way they care for higher-weight patients. But strong evidence exists that obesity (defined as having a body mass index of 30 or higher) puts you at greater risk of dying from Covid-19.

“At the end of the day, regardless of what the science does or doesn’t say about Covid and weight, we still don’t have any way for people to lose weight and keep it off,” Ms. Harrison said.

She suggested asking yourself: What am I getting out of worrying about food and my body right now, and what am I losing? What could I be doing with that time and energy? One survey suggested women fretted for 21 minutes a day and men for 18 minutes a day. (And to some people, that number may sound awfully low.) Still, that’s a lot of time that could be devoted to anything from guilty pleasures to relationships — or to life- and world-changing causes.

“Fearing weight gain and feeling bad about your body takes you away from what really matters and being able to participate in this cultural moment,” Ms. Harrison said.

Eat if you want to.

One tenet of diet culture — or wellness culture, which is really just the rebranding of diet culture — is that eating for any other reason besides screaming biological hunger is a bad thing. This belief came from the rise ofdiet clubs in the 1960s, where women went to talk out their feelings so they could avoid so-called emotional eating.

“You have to be starving to deserve to eat in this culture,” Ms. Harrison said. “But we are designed to get pleasure out of food and connect over food.”

Let’s say food really is giving you comfort. “Go with it, love it, be grateful for it,” Ms. Resch said. With one caveat: You’ll need to stay present to get the actual comfort and satisfaction. If you’re too busy judging yourself when you eat, you’re not savoring the texture and flavor.

Ask why you exercise.

So you’re not working out enough, or as hard as you did pre-lockdown, and you think this is a problem. This may be because, for you, exercise is about controlling your body or compensating for what you’ve been eating — yet another belief to be discarded.

“Exercise is its own pleasurable thing you can do for joy and for mental health benefits,” Ms. Harrison said. “It’s hard to tune into that when you have all these voices in your head saying, ‘But if I can’t get my heart rate to this I’m not going to get the benefits.’”

“Exercise connotes something you have to do,” she said. “You want to take out the sense of doing it for a purpose like weight loss or keeping muscle on.” Instead, ask yourself what makes you feel good in your body. It could just be standing up and stretching.

Channel your energy into something more productive than obsessing about weight and exercise — like working to change diet culture, such as calling out thin-promoting or fat-shaming comments on your social networks. Suman Ambwani, an associate professor of psychology at Dickinson College, said people are sometimes reluctant to challenge these sorts of statements. “But we found in one study a couple of years ago that someone who called attention to this issue and rejected appearance-related self-worth and the thin ideal was actually seen as more likable than someone who just colluded with body-shaming,” she said.

Dr. Ambwani suggested following the health-at-every-size movement — a nearly 20-year-old movement that promotes weight inclusivity and social justice — to educate yourself, and then looking for ways to get involved. If you live in Massachusetts, for example, you could write to lawmakers in support of a bill underway to make weight discrimination illegal.

Finally, look at feeling bad as the canary in the coal mine — the indicator that something might be ready to change, said Elizabeth Hall, an intuitive eating coach in Farmington, Conn. Although people often respond by vowing to buckle down or work harder, she said, the way to end the guilt and shame is actually just to notice those feelings, and to ask yourself if they are serving you or causing suffering.

“Feeling bad is actually an invitation to expand and shift our consciousness and let go of expectations and old programming,” she said.