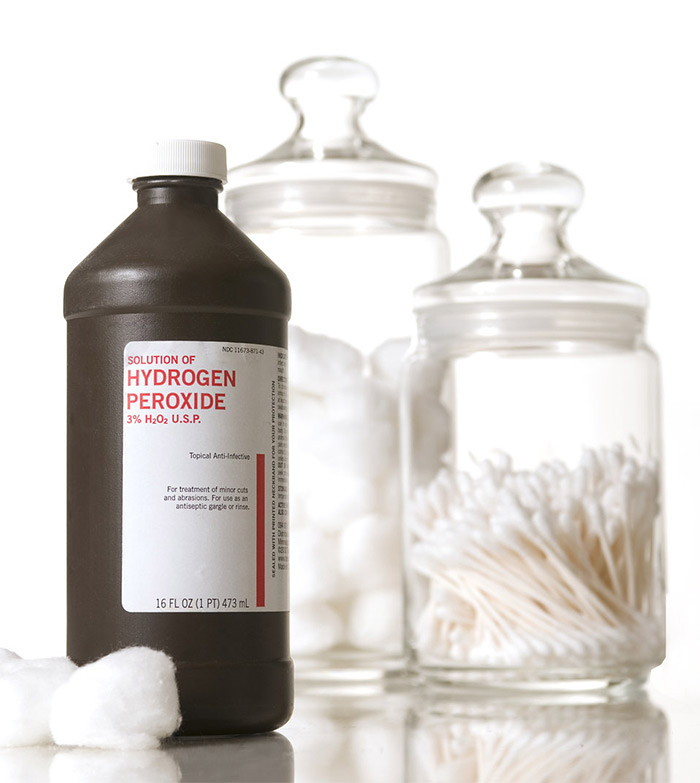 Not many people think about the chemicals they use at home when they are trying to be healthy. But the truth is, you should, and that’s because you may be damaging your health without even knowing it.

One thing to consider is the use of cleaning agents in your home and in this post, I will clarify any confusion about hydrogen peroxide and how it compares to bleach.

If you were wondering what hydrogen peroxide actually is and whether it’s better than bleach, continue reading to learn everything you need to know.

What exactly is hydrogen peroxide?

Hydrogen peroxide is a popular antiseptic and cleansing agent with a multitude of uses. It is used in various industries because of its bleaching properties but it’s also used as a sterilizing agent and as a disinfectant.

Hydrogen Peroxide is chemically known as H22, a formula which may remind you of water (H20).  But the reality is, these are two very different compounds, even although they may look similar (H22 is a very pale blue liquid at room temperature).

Hydrogen peroxide is a natural compound, commonly found in the natural environment. It occurs in surface water, groundwater and within the atmosphere.

It can even be found within the human body, albeit in very small concentrations. Our cells produce hydrogen peroxide as a defence mechanism in order to protect the body from a dangerous substance called superoxide. In simple terms, hydrogen peroxide forms naturally in our body as a by-product of metabolism to eradicate the superoxide ion. But it is not a neutral substance and can be harmful to the body, therefore it’s broken down into oxygen and water by an enzyme catalase which is found in the liver.

Because of its antiseptic and bleaching properties, hydrogen peroxide is produced on a big scale today. It is used in the textile and paper industry, for medicinal applications and for producing foam rubber and organic chemicals. It’s even used as an antimicrobial agent in starch and cheese products and is found in dried eggs due to its oxidizing properties.

The FDA deems hydrogen peroxide generally safe when used in accordance with their recommendations. However, a high strength hydrogen peroxide (at 35% strength) is dangerous and highly corrosive. Using it internally is not recommended by the FDA and it has never been approved by them.

Breathing hydrogen peroxide (when in a gas form) at a concentration of seven parts per million in the air causes lung irritation and when the solution is used as a mouthwash, even in half-strength, it can irritate the tongue and surrounding skin.

The takeaway: Although hydrogen peroxide is found naturally in the environment, when highly concentrated, it’s dangerous and corrosive, causing irritation to skin and mucous membranes. To use it safely you need to be absolutely clear as to how much you should use and in what concentrations.

Bleach is a generic name for a group of chemicals that are used domestically or industrially for cleaning, disinfection, removing stains and lightening hair colour. Bleach kills all kinds of viruses and bacteria and can kill even weeds. There are two types of bleach: chlorine-based and non-chlorine based.

Bleach reacts with several other compounds/liquids and mixing it with other household chemicals could result in some very dangerous reactions. For example, extremely toxic chloramines can be produced when mixing bleach with ammonia solutions (even urine!) and in some cases, chlorinated volatile organic compounds (VOCs) are produced which are also harmful to health. The Sciencing website recommends leaving the room immediately if you accidentally mix ammonia and bleach and then call 111 or 999. Scary stuff!

Despite all of the things that may happen when using bleach, most surprisingly, it’s considered to be non-toxic to humans, as long as you use it in accordance with the label directions, including adhering to the recommended ventilation and protection rules.

The takeaway: Household bleach is a cleaning agent and a skin irritant which is dangerous when mixed with certain liquids. On contact with air, it readily releases a chlorine gas which is well known to irritate the lungs. Bleach is only deemed safe when used correctly and according to the label instructions. Incorrect use can result in a release of highly toxic gases and in the worst-case scenario, may even result in death.

Is hydrogen peroxide the same as bleach?

Although hydrogen peroxide has bleaching properties it is not the same as household bleach.

Technically, it is classed as ‘non-chlorine bleach’ as hydrogen peroxide solution has a different chemical make-up to bleach. You could find small amounts of hydrogen peroxide in some type of bleaches, but the two liquids are very different.

Household bleach is more harmful than hydrogen peroxide since it releases chlorine gas easily and can react with several different compounds, producing toxic gases. In addition, it’s corrosive and extremely irritating in higher concentrations when it comes into contact with the skin.

People with health problems such as heart conditions and asthma are advised to stay away from bleach since it can irritate their condition. What’s more, regular use of bleach has been linked to an increased risk of developing a fatal lung condition.

Hydrogen peroxide, on the other hand, is pretty safe to use in lower concentrations. It’s very unstable and breaks down easily into oxygen and water. However, it may still react with other substances so you should take great care when using it and never mix it with another liquid or powder. You should also keep it away from heat sources, metals and oxidizing agents in order to prevent any undesirable reactions.

Both types of chemicals carry certain risks but hydrogen peroxide is safer and less hazardous than bleach when used correctly.

Hydrogen peroxide vs. Bleach – The differences

The key differences between hydrogen peroxide and household bleach are summarized below:

The answer to the question of whether bleach can kill mould is not that straight forward.

Many people actually do use bleach to remove mould but it doesn’t mean it’s the best mould remover. After pouring bleach on mould, it may seem like the mould has disappeared but what has really happened is that the mould has been bleached and lost its colour.  Some of it may have been killed but not the roots. After a week or so, the mould will grow back but this only happens on porous surfaces (those with microscopic holes) such as wood, grout and drywall. If you use bleach to kill mould on non-porous surfaces such as tiles, porcelain, and glass, this will actually work and the mould won’t come back.

Just like bleach, hydrogen peroxide is also effective at killing mould on non-porous surfaces but you need to leave it in place for at least 10 minutes for it to work.

If you are wondering which liquid you should use for cleaning and which one is safer and better for your health, I would recommend hydrogen peroxide.

Hydrogen peroxide is a less volatile and hazardous bleaching agent that is very safe when used in low concentrations (around 3-6%) at home. It doesn’t release toxic chlorine gas and it quickly decomposes into harmless oxygen and water. However, you should still take great care when using it and be aware of its potential reactions with various organic compounds and metals.

Where to buy hydrogen peroxide

If I have convinced you to try hydrogen peroxide instead of bleach, here are a few places you can buy it from:

How to Kill Mold Effectively with Hydrogen Peroxide (Hint: It’s Better Than Bleach)