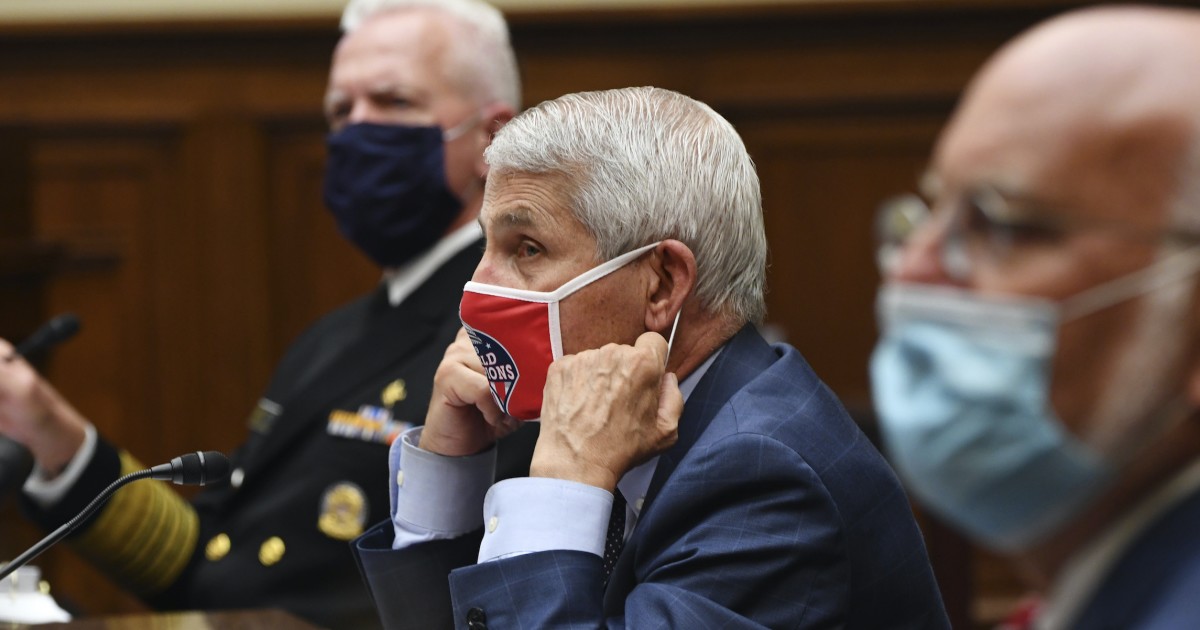 Dr. Anthony Fauci, the government’s top infectious disease expert, warned Friday that the coronavirus pandemic won’t end on its own.

“I do not believe it would disappear because it’s such a highly transmissible virus, it is unlikely that it’s going to disappear,” Fauci told the House special committee tasked with monitoring the government’s response to the coronavirus pandemic.

He added that controlling viral spread is a “multifaceted” process and following social distancing protocols and speeding up testing is “the most important.”

“We could do a really good job of controlling it if we paid attention to five fundamental principles, one of which is what we’re doing here with masks, crowds, [avoiding] bars, distance, washing hands, and that is critical,” Fauci said, adding, “testing is absolutely an important part of it.”

Dr. Robert Redfield, director of the Centers for Disease Control and Prevention, added that if people followed guidance from public health officials about social distancing, the United States could control the virus without having to impose more crippling economic restrictions.

“We can get back without these unintended consequences,” Redfield told the House panel. “The face mask, social distancing, and the hand hygiene, staying smart about gatherings and staying out of crowded bars and crowded restaurants … We’ve done modeling data, we get the same bang for the buck as if we just shut the entire economy down.”

Fauci also told the House committee Friday that while there is “never a guarantee that you’re going to get a safe and effective vaccine,” he remains cautiously optimistic that one will be developed “by the end of this year and as we go into 2021.”

He assured Congress that the speed at which vaccines are being developed does not mean vaccines will not be fully vetted for safety before becoming available to the public.

“I know to some people this seems like it is so fast that they might be compromising safety and scientific integrity, and I can tell you that is absolutely not the case,” Fauci said. “The rapidity with which we’re doing it is a result of very different technologies in getting from the time we recognized this pathogen in the beginning of January.”

The Department of Health and Human Services and the Department of Defense pledged $ 2.1 billion to pharmaceutical companies GlaxoSmithKline and Sanofi Pasteur for the production of up to 100 million doses of COVID-19 vaccines as well as tests and treatments. The deal announced Friday is the largest one struck so far between the U.S. government and pharmaceutical companies working on a vaccine for COVID-19.

“The portfolio of vaccines being assembled for Operation Warp Speed increases the odds that we will have at least one safe, effective vaccine as soon as the end of this year,” HHS Secretary Alex Azar said Thursday.

The number of deaths across the U.S. jumped about 1,300 since Thursday, reaching a total of more than 152,900. Over 4.5 million infections have been confirmed in the U.S. so far.

Read More:  Updates on the Fight to End Water Fluoridation

Vermont Gov. Phil Scott announced Friday that more than 200,000 free cloth face masks will be distributed across the state before the statewide mask mandate takes effect on Saturday, the Washington Post reported. The masks, donated for public distribution as part of Operation Cloth Face Coverings, will cover about a third of the state’s population.

The $ 600 weekly added unemployment benefit expired Friday, as Republicans and Democrats negotiated over a new relief package. Democrats have sought to extend the plussed-up benefits into 2021. Republicans are trying to overhaul the benefit so that fewer workers receive more money through unemployment than they would at work.

Hong Kong postponed its parliamentary elections, set to take place in September, until next year amid a rise in new coronavirus cases, according to the BBC . Pro-democracy groups viewed the decision as an attempt to block opposition candidates challenging Beijing-backed candidates.

“This postponement is entirely made based on public safety reasons, there were no political considerations,” Chief Executive Carrie Lam said.

British Prime Minister Boris Johnson announced Friday that he was “squeezing the brake” on reopening the United Kingdom in order to keep the coronavirus outbreak under control, according to the Evening Standard. Johnson said the prevalence of the virus in the U.K. “is likely to be rising for the first time since May.”

Johnson was joined by England’s Chief Medical Officer, Chris Whitty, who said the “idea that we can open up everything and keep the virus under control” is wrong.

Brazilian President Jair Bolsonaro said Thursday that he might have mold in his lungs after self-isolating indoors for weeks following his positive COVID-19 test earlier this month.

“I’ve just taken a blood exam. I was a bit weak yesterday,” Bolsonaro said on a Facebook broadcast. “It must have been those 20 days inside the house. We catch other things. I’ve caught mold, mold in my lungs. It must be that.”

Bolsonaro’s wife tested positive for COVID-19 on the same day, and a government statement said that the first lady is “in good health and will follow all established protocols.”