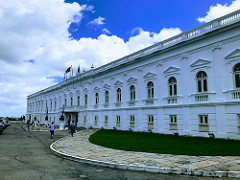 About Hampi:
Hampi is a very famous village, situated in the Northern Karnataka state of India. During the 14th century empire it was the kingdom of Vijayanagar. Now it is nestled within the ruins of Vijayanagar empire, hence sometimes it is also known as ‘Ruined City’, which is spread over an are of 26 sq km. Adorned with majestic hills and valleys it houses more than 500 monuments, which are listed as ”Group of Monuments at Hampi”, by UNESCO World Heritage Site.

Shri Vijayavitthala Temple:
This is an excessively beautiful temple, dedicated to Lord Vitthal (Lord Vishnu), that makes everyone speechless with its charismatic architecture. The construction of temple was started in the vicinity of King Krishna Deva Raya in 1513 AD, which continued till 1565 AD. The temple reflects the best example of Dravidian architecture style.

Stone Chariot:
Stone Chariot is located inside the Vijayavitthala temple complex. It is believed that the chariot is supposed to be carved out of a single rock. The complex carving work of the chariot is seen nowhere in the world. The chariot looks like a model of temple chariot, which is being used during a traditional procession.

Shri Virupaksha Temple:
Shri Virupaksha Temple is located in the foot hills, known as Hemakuta Hill. The temple is also called Pampapathi Temple, which is one of the most important as well as the holiest temples of the region. The origin of the temple dates back to 7th century, which houses a shrine of Lord Shiva, Lord Pampa, Bhivaneshwari Devi.

King’s Balance:
King’s Balance is also known as Tula Bhara or Tula Purushadana, which contains two lofty granite pillars of 15 feet each, supporting a 12 feet stone beam. It was used by the kings of Vijayanagara to weigh on certain occasions such as – Lunar or Solar eclipse.

Stepped Tank:
Stepped Tank is one of the most applauded remains, located in Durbar area. It is a small tank of around 22 sq m and 7 m deep, which is built of chlorite schist. It was used by the members of royal families.

Other Attractions: Akka Tangi Gudda, Anegondi, Badava Linga, Ugra Narsimha, Zenana enclosure, The Underground Temple, Sasivekalu Ganesha Temple, Hazari Rama Temple etc are the other attractions at Hampi as well as one of the most important part of Karnataka travel.

Plan a South India Tour and enjoy the wonderful monuments with Hampi Travel.