If you’re like most people, chances are you’re consuming unhealthy amounts of sugar on a regular basis. Even if you’re not big on candy, most processed foods will provide you with an excessive amount of added sugars.

As noted in the BBC One report “The Truth About Sugar,”1 a serving of Pad Thai noodles contains 9.5 teaspoons of sugar and a package of sweet and sour chicken with rice contains 12.5 teaspoons, which is more than a can of soda.

A can of baked beans contains 6 teaspoons of sugar, which would ideally be your grand total for the day, so it’s important to realize that it’s not merely cakes, cookies, candy and ice cream that get people into trouble.

Even many baby foods contain shocking amounts of sugar,2,3 which can set your child on the path of lifelong sugar addiction and the health problems that go along with it. The idea that sugar is addictive is not new. A number of studies have shown it acts much like other addictive substances.

One of the latest studies looking at the addictive potential of sugar was published in the November 2019 issue of Scientific Reports,4,5,6,7,8 in which they point out that “Excessive sucrose consumption elicits addiction-like craving that may underpin the obesity epidemic.”

By using PET imaging along with beta-opioid and dopamine receptor agonists, the researchers were able to show how sucrose affects the brain chemistry in miniature pigs. The miniature pigs were chosen for the fact that they have well-defined subcortical and prefrontal cortical regions, which “enable a more direct translation to human brain function.” As explained by the authors:9

“After 12 days of sucrose access, BPND [non-displaceable binding potentials] of both tracers had declined significantly in striatum, nucleus accumbens, thalamus, amygdala, cingulate cortex and prefrontal cortex, consistent with down-regulation of receptor densities … The lower availability of opioid and dopamine receptors may explain the addictive potential associated with intake of sucrose.”

Even a single exposure to sucrose produced as much as a 14% decrease in carfentanil (a beta-opioid receptor agonist) binding in the nucleus accumbens and cingulate cortex, which is consistent with opioid release.

In more layman terms, sugar consumption triggers the release of natural opioids and dopamine in your brain, thus lowering the availability of those receptors. Reduced receptor availability is a sign of overstimulation, as when your brain gets overstimulated, it downregulates the receptors in order to protect your brain from damage.

The drawback of this protective mechanism is that you now need a higher dose of the substance to get the same pleasure response, and this is a key mechanism by which addiction develops.

Figure 4 from the Scientific Reports study shows how carfentanil binding potential changed from baseline levels over the course of 12 days. Figure 6 shows the change in raclopride, a selective antagonist on dopamine receptors.10

Figure 4: Regional analysis of carfentanil bonding potential between baseline and after 12 days of sucrose water exposure. 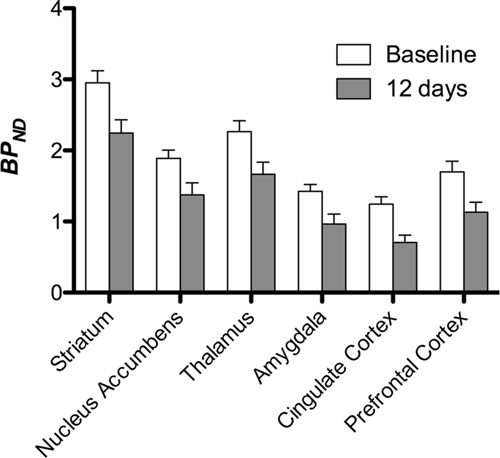 Figure 6: Regional analysis of raclopride bonding potential between baseline and after 12 days of sucrose water exposure. 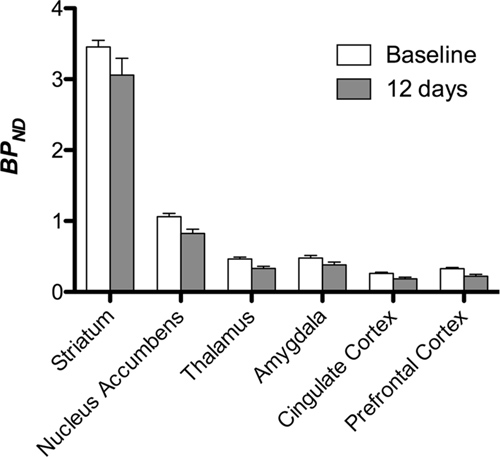 According to the authors, “The results clearly demonstrate that sucrose affects reward mechanisms in a manner similar to that of drugs of abuse.”11 In the discussion section of the paper, they further explain:

“The intake of sucrose as a palatable substance is known to release DA [dopamine] and induce dependency in rodents, with sucrose shown to be even more pleasurable than cocaine in rodents in certain contexts. Thus, rodents work more intensely to obtain sucrose than cocaine, even in the absence of food deprivation.

However, the effects of sucrose are regulated both by the homeostatic system and by hedonic reward circuits that may mediate the distinction between nutritional and hedonic aspects of sucrose action.

We opted for a one-hour per day schedule in order to promote ‘binging’ … Behavioral studies of food intake often target food-restricted animals, but the design may not necessarily reflect the same neural mechanisms active in obesity. Pigs in the present study were not food restricted and were fed the usual amounts of their normal diet in addition to access to sucrose.

Opioid receptors (OR) are widely expressed in the brain, specifically in structures known to modulate eating and reward processes. ORs have been shown to be important in the rewarding and relapsing effects of cocaine … Previous studies have shown that palatable food can lead to feelings of pleasure by stimulating opioid release.

After 12 days of sucrose access, we observed decreased carfentanil binding, which has several possible explanations, including endogenous opioid release and binding to μOR [beta-opioid receptors], μOR internalization as a result of increased opioid binding, and increased DA D2/3 receptor activation leading to heterologous desensitization of μOR …

In a study of acute feeding behavior in healthy men, feeding led to robust and widespread endogenous cerebral opioid release, both in the presence and absence of hedonia, suggesting that opioid release reflects metabolic and homeostatic, as well as hedonic, responses.”

Other research has shown daily sugar consumption impairs spatial memory and inhibits neurogenesis in the hippocampus, a brain area involved in learning and memory processes.12

Research13 on rats has also shown a high-sugar diet tends to alter inhibitory neurons in the prefrontal cortex, where decision-making and impulse control are centered. Aside from impaired impulse control and the inability to delay gratification, this alteration may also increase the risk of mental health problems in children and adolescents. As noted in a 2015 study:14

“We found that sucrose-exposed rats failed to show context-appropriate responding … indicative of impairments in prefrontal cortex function. Sucrose exposed rats also showed deficits in an on object-in-place recognition memory task, indicating that both prefrontal and hippocampal function was impaired.

Analysis of brains showed a reduction in expression of parvalbumin-immunoreactive GABAergic interneurons in the hippocampus and prefrontal cortex, indicating that sucrose consumption during adolescence induced long-term pathology, potentially underpinning the cognitive deficits observed.

These results suggest that consumption of high levels of sugar-sweetened beverages by adolescents may also impair neurocognitive functions affecting decision-making and memory, potentially rendering them at risk for developing mental health disorders.”

Eliminating Sugar Is a Quick Route to Improved Health

Needless to say, a high-sugar diet will also take a toll on your health by packing on unwanted pounds, and the pace can be remarkably rapid. As noted in the BBC program, “The Truth About Sugar” (hyperlinked at the beginning of this article), drinking three cups of tea or coffee per day with 2 teaspoons of sugar added to each cup can result in a 9.9-pound weight gain (4.5 kilos) in a single year, provided you don’t increase your physical activity to burn off the extra calories.

When you consider that most consume five or six times more added sugar than that each day, it’s easy to see how obesity has become more the norm than the exception.

The World Health Organization recommends limiting your daily sugar consumption to 10% of your total intake, or better yet, 5%, which equates to about 6 teaspoons or 25 grams, if you want to really optimize your health.15

The good news is research16,17,18 shows reducing added sugars from an average of 27% of daily calories down to about 10% can improve biomarkers associated with health in as little as 10 days — even when overall calorie count and percentage of carbohydrates remains the same.

When you’re trying to avoid sugar, you need to avoid any and all of these, as they all have similar effects, although processed fructose — such as high fructose corn syrup — tends to have the most adverse health effects and is a primary driver of obesity and diabetes.20 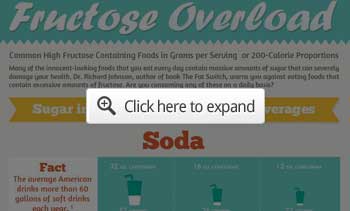 How to Break Your Sugar Addiction

If you find yourself struggling with sugar cravings, intermittent fasting can help. For optimal results, you’ll want to replace the calories from sugar and non-vegetable carbs with vegetables and healthy fats, as this will help reset your body’s metabolism, allowing it to effectively burn fat for fuel again. When sugar is not needed for your primary fuel and when your sugar stores run low, your body will crave it less.

Another helpful technique, which addresses the emotional component of food cravings, is the Emotional Freedom Techniques (EFT). If you maintain negative thoughts and feelings about yourself while trying to take physical steps to improve your health and body, you’re unlikely to succeed.

While traditional psychological approaches may sometimes work, EFT has shown to be a far better, not to mention inexpensive, solution. If you feel that your emotions, or your own self-image, may be your own worst enemy when it comes to altering your relationship with food, I highly recommend you read my free EFT manual and consider trying EFT on your own.

A version of EFT specifically geared toward combating sugar cravings is called Turbo Tapping. For further instructions, please see The Epoch Times article, “Turbo Tapping: How to Get Rid of Your Soda Addiction.”21

To get an idea of how EFT works, see the video below, in which EFT practitioner Julie Schiffman demonstrates how to use EFT to fight food cravings of all kinds.