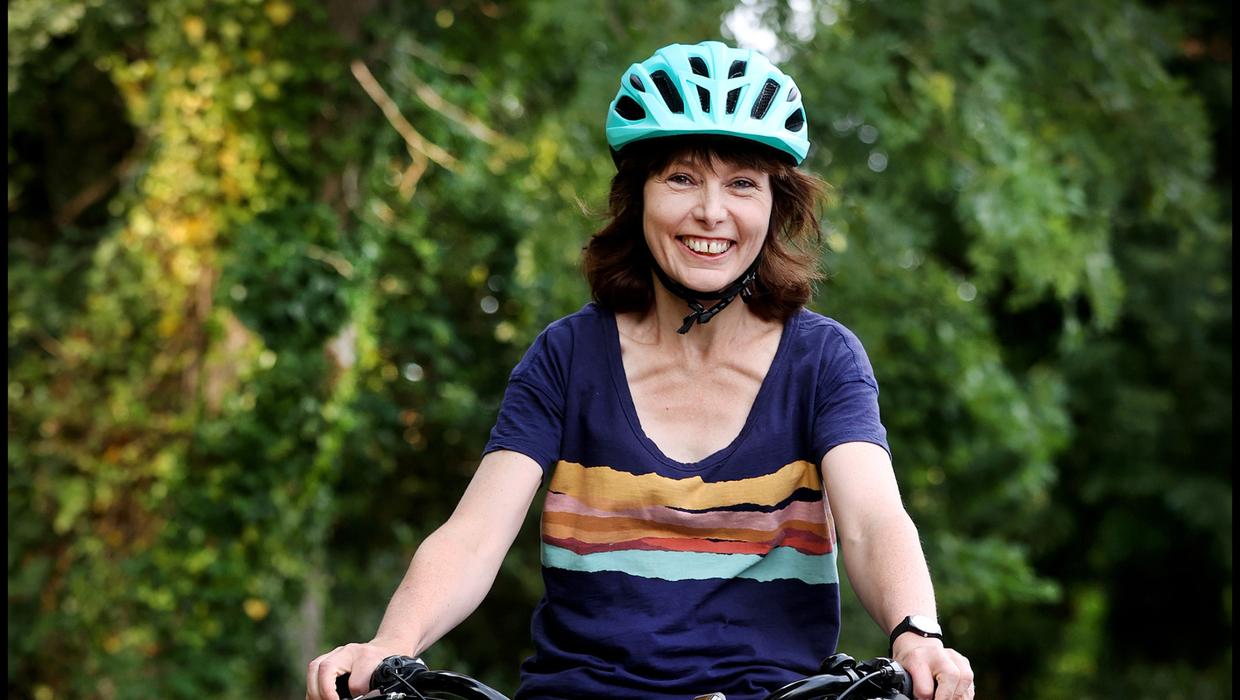 It’s a brilliant feeling,” a colleague had said, misty-eyed with memories of the first taste of childhood freedom that came from learning to ride a bike.

Months later, I’m sprawled on a damp grass verge in the middle of the nightly slug convention, pinned beneath a bicycle that has the same concept of freedom as a warden in Alcatraz.

I push feebly at its metal bars, trying to ignore an outraged knee, then hear the lone car of the evening approach in the distance and decide to lie very still and hope not to be seen.

There’s just one problem. The bike’s lights are flashing maniacally. The slugs think they’re in Las Vegas. The chances of not being seen, of not being forcibly rescued by a Samaritan in search of a good deed, of not dying the most agonising death of flesh-eating embarrassment, are getting slimmer by the second.

So up I get, disentangling limbs from frame amid protests from angry knee, reposition the saddle which has twisted 90 degrees, and climb wobbling on board. Only the saddle won’t go back into place. It’s pointing at ten to two, angled at the oncoming motorist, which doesn’t help with either the physical or emotional instability of the situation.

And then there’s a cold, wet sensation and a slug slides down the inside of my sleeve. It’s looking at me, indignant, snarling: “Kindly return me to Vegas – the show was about to start.” My eyes begin to moisten, not with mist, but with something more akin to a monsoon.

This is not the first time I’ve come a cropper while attempting the death-defying feat of movement on two wheels where four wheels are, by all laws of logic, essential. Bus shelters pose a particular problem. Collision number one was with one appropriately bearing an advertisement for the clothing line, Boohoo.

Read More:  What We Learned in 2019: Health and Medicine

Collisions two, three and several sequels, were with the ironic one in yellow that taunted: “Protect yourself, protect others, stay at home.”

The compulsion to flout all three commandments was not an act of lockdown rebellion but initially struck almost a year ago when I got my first ever bicycle, at the should-have-known-better age of 50.

Yes, it’s true, there really are people who never learned to ride a bike as a child. Freaks, indolents, alien abductees.

Or maybe just people who grew up in circumstances not conducive to, or encouraging of, cycling. For me, several changes of address, living in flats and a preoccupation with horses which were by far my preferred, albeit pretend, means of transport meant cycling wasn’t much on my radar as a child. But we’re at risk of raising a whole new generation of them even now with the belated move towards bike-friendly streetscapes.

High-rise, low-amenity housing isn’t welcoming to kids on bikes. A fresh round of pandemic-induced poverty will thwart the bike-owning ambitions of many children.

Children growing up in direct provision and emergency accommodation will often hear the words “on your bike” but that’s as close as many of them will get to giving the suggestion a go.

Sociology lecture over. Back to me.

I started taking the bike out around the neighbourhood, testing garden hedges for springiness by cycling headlong into them.

It did not go well. Many of the hedges are copper beech that hang on to their leaves in autumn, allowing them go crunchy brown on their stems. Colliding with them sounds like Godzilla eating cornflakes.

Kind people offered encouragement. Kinder folk said nothing at all. No one actually said: “It’s like riding a bike”, presumably because the human instinct for survival is stronger than the urge to inflict clichés on a woman picking twigs out of her ears.

Instead, they opted for opening lines such as: “Been a while?” “Forever,” I could truthfully say after I’d spat out sufficient quantities of greenfly to make myself intelligible.

“Don’t be scared of it,” was the unsolicited morale-booster from one observer. “If you’re scared you’ll fall, you will.”

The thing is, I wasn’t scared of falling. I was very good at it and became fascinated by the swirling thunderclouds of bruises gathering with ever greater intensity on my battered legs.

But I googled child development experts who said the best age to start learning to ride a bike was five. So for me, the optimum moment for bike-riding skills acquisition was around the time Nixon resigned. That’s not scary; it’s terrifying.

I also googled ‘how to’ videos which assured viewers learning to ride was so quick and simple, they’d be competing in the Tour de France backwards in no time.

If they had injected a single grain of honesty and said, “It will be slow and painful but you’ll be avoiding hedges in six months”, I’d have subscribed immediately.

Gears are a mystery to a first-time bike owner so I googled them too but when I asked what gear I should cycle in, I got only dazzling arrays of lycra to choose from.

The bike over-wintered in the shed.

Then came lockdown and the realisation that, come nightfall, the streets were empty and most normal people were indoors watching Normal People. The bike, and a few startled spiders, came out of the shed.

Every night after dark, I sneaked out and tried to make it work; tried to find the pedals with my feet instead of my shins, tried not to turn every wobble into a tumble, tried to avoid braking every time I seemed in danger of actually travelling a social distancing length from my starting point.

Read More:  What we learned from John Singleton: Why Black men need to get serious about their health

The night of the slugs was a low point but there is no lower feeling than admitting defeat. Especially given the day job. When not inspecting the structural integrity of bus shelters, as the environment correspondent of this paper, I have the kind of job where you might expect some level of acquaintance with the art of bike riding.

Besides, the youngest had informed her class on Zoom that she’d spent the weekend trying to teach her mother to ride a bike and now there were 25 chortling eight-year-olds waiting for a progress report.

So I kept trying, cultivating bruises and praying for a new series of Normal People.

And then it happened. The foot that perpetually flailed at thin air trying to locate the pedal finally got its inner GPS in order, the wobbles began straightening out, the collisions stopped and the near misses lessened.

Corners remain tricky and must be negotiated in slow motion. Paths are still more appealing than cycle lanes. Cycle lanes still need paths alongside so there’s somewhere to stop and pretend to adjust the chain when a bout of nerves takes over.

But there is something about pedalling under your own power, at your own pace; about free-wheeling in the fresh air; about getting a gear change just right so you reach the top of a hill without stopping, engulfed by Rocky-esque feelings of triumph.

I can’t quite put my finger on it but I think it just might be brilliant.

about Acne After BEST Blood Cancer Care cause Coronavirus Could COVID19 Diabetes diet does Education From health Help Home Keto Know Learning Loss Medical More News pain Posted Pressure says Should Student Study Take this tips Travel Treatment Vaccine Weight when where with Work ‘What
Iconic One Theme | Powered by Wordpress
This website uses cookies to improve your experience. We'll assume you're ok with this, but you can opt-out if you wish. Cookie settingsACCEPT
Privacy & Cookies Policy