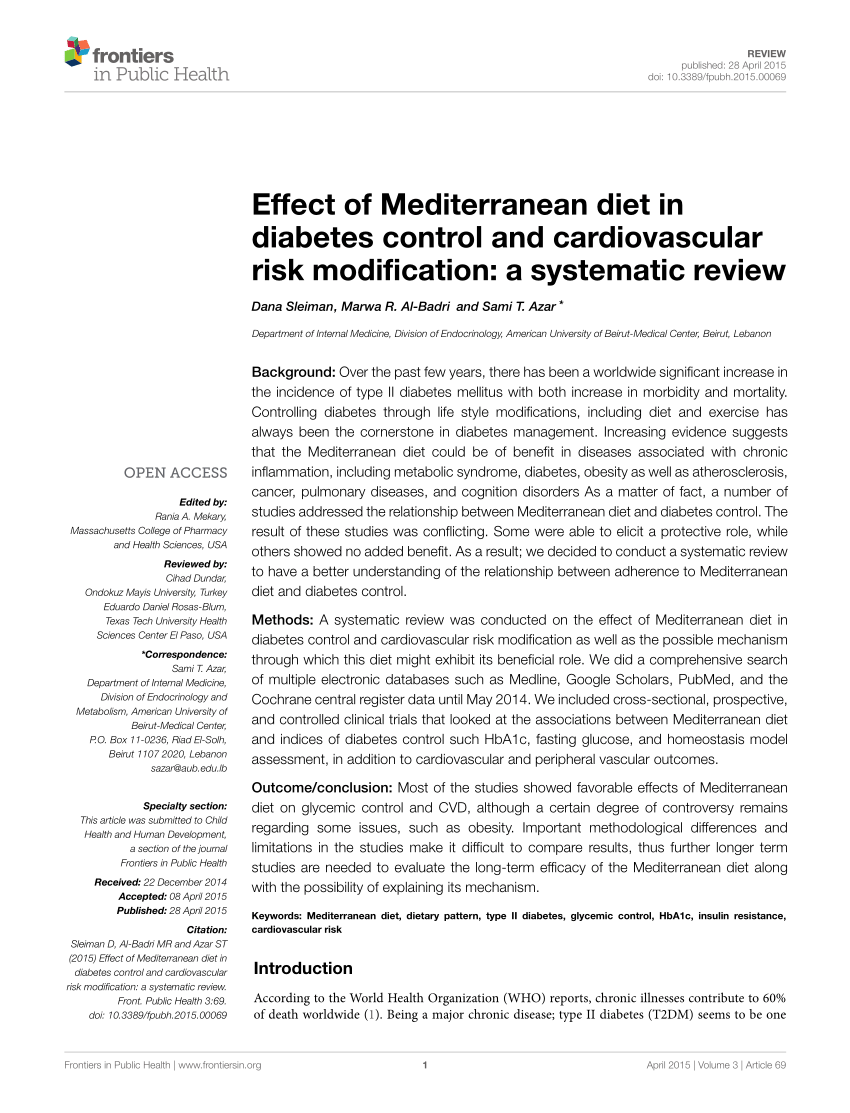 Consumption of selected dietary components is favourably associated with prevention of type 2 diabetes, but discordant results for some foods or single nutrients continue to appear. The study of complete dietary patterns represents the most adequate approach to assess the role of diet on the risk of diabetes. The term ‘Mediterranean diet’ essentially refers to a primarily plant-based dietary pattern whose greater consumption has been associated with higher survival for lower all-cause mortality. At least five large prospective studies report a substantially lower risk of type 2 diabetes in healthy people or at risk patients with the highest adherence to a Mediterranean diet. Five randomized controlled trials have evaluated the effects of a Mediterranean diet, as compared with other commonly used diets, on glycaemic control in subjects with type 2 diabetes. Improvement of HbA1c levels was greater with a Mediterranean diet and ranged from 0.

Background: Over the past few years, there has been a worldwide significant increase in the incidence of type II diabetes mellitus with both increase in morbidity and mortality. Controlling diabetes through life style modifications, including diet and exercise has always been the cornerstone in diabetes management. Increasing evidence suggests that the Mediterranean diet could be of benefit in diseases associated with chronic inflammation, including metabolic syndrome, diabetes, obesity as well as atherosclerosis, cancer, pulmonary diseases, and cognition disorders As a matter of fact, a number of studies addressed the relationship between Mediterranean diet and diabetes control. The result of these studies was conflicting. Some were able to elicit a protective role, while others showed no added benefit. As a result; we decided to conduct a systematic review to have a better understanding of the relationship between adherence to Mediterranean diet and diabetes control. Methods: A systematic review was conducted on the effect of Mediterranean diet in diabetes control and cardiovascular risk modification as well as the possible mechanism through which this diet might exhibit its beneficial role. We included cross-sectional, prospective, and controlled clinical trials that looked at the associations between Mediterranean diet and indices of diabetes control such HbA1c, fasting glucose, and homeostasis model assessment, in addition to cardiovascular and peripheral vascular outcomes. Important methodological differences and limitations in the studies make it difficult to compare results, thus further longer term studies are needed to evaluate the long-term efficacy of the Mediterranean diet along with the possibility of explaining its mechanism.

This fact necessitates further studies to assess the effect of adherence to Mediterranean diet on cardiovascular risk in diabetic patients. A higher MDS was independently related to a reduction of peripheral artery disease risk, with an odds ratio of 0. After 1 year, both the fasting glucose level and the HbA1c were lower in the Mediterranean diet arm Trichopoulos D. The insulin resistance atherosclerosis study IRAS. In this study, an inverse association between Mediterranean diet and indices of glucose homeostasis and insulin resistance assessed by HOMA was found.