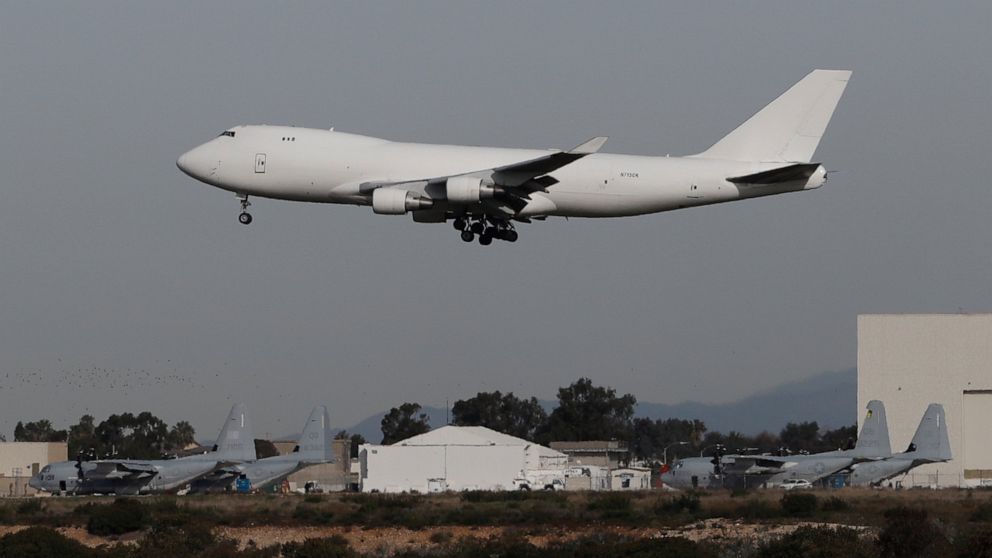 SAN DIEGO — About 350 Americans fleeing the virus zone in China were being screened Wednesday at two California military bases where they will be quarantined for 14 days.

Two jets arrived before dawn at Travis Air Force Base northeast of San Francisco. Officials said 178 of the passengers will spend the next two weeks at a hotel on the grounds, while the others were transported hours later to Marine Corps Air Station Miramar near San Diego.

Guests and staff at the hotel at Travis were moved out ahead of the planes’ arrival, Technical Sgt. Traci Keller said. The Americans were evacuated from the Chinese city of Wuhan, which is at the center of the new virus outbreak.

The evacuees range in age from under 2 to over 65. Most are American citizens who either traveled or lived in Hubei province, where Wuhan is the provincial capital, for months or years, said Dr. Henry Walke of the Centers for Disease Control and Prevention. One child on the flight had a fever and was being evaluated at a Northern California hospital.

They will receive health evaluations to check for symptoms of the virus and have their temperature taken twice a day. They are not restricted to their rooms, but each family unit was told to stay 6 feet (nearly 2 meters) away from other families, along with other precautions.

“We don’t want kids to share toys between the families,” Walke said.

Other planes carrying Americans from Wuhan will arrive Thursday at Lackland Air Force Base in San Antonio, Texas and Eppley Airfield in Omaha, Nebraska, where they will be quarantined, the Centers for Disease Control said.

One of the planes left Travis Air Force Base later Wednesday and took about 170 Americans to the Miramar, where those people will also quarantined for 14 days, said Dr, Christopher Braden of the Centers for Disease Control.

“They are happy and relieved to be back in the United States,” Braden said at an afternoon news conference in San Diego. The passengers would be screened before they settle in at the base.

Also Wednesday, health authorities in the U.S. started shipping diagnostic test kits to labs in the U.S. and abroad. By the start of next week, testing for the virus will be done closer to patients, rather than at the Centers for Disease Control’s lab in Atlanta, and states will begin to communicate test results to the public. The center plans to update the U.S. case counts three times each week on its website.

“Now is the time to act so we can slow the introduction and impact of this virus in the U.S.,” said Dr. Nancy Messonnier of the center. “This is the beginning of what could be a long response.”

The Americans were evacuated a week after another jet with 195 American evacuees from Wuhan arrived at March Air Reserve base in Southern California, where they remain under quarantine.

The new virus is a member of the coronavirus family that’s a close cousin to the SARS and MERS viruses that have caused outbreaks in the past.