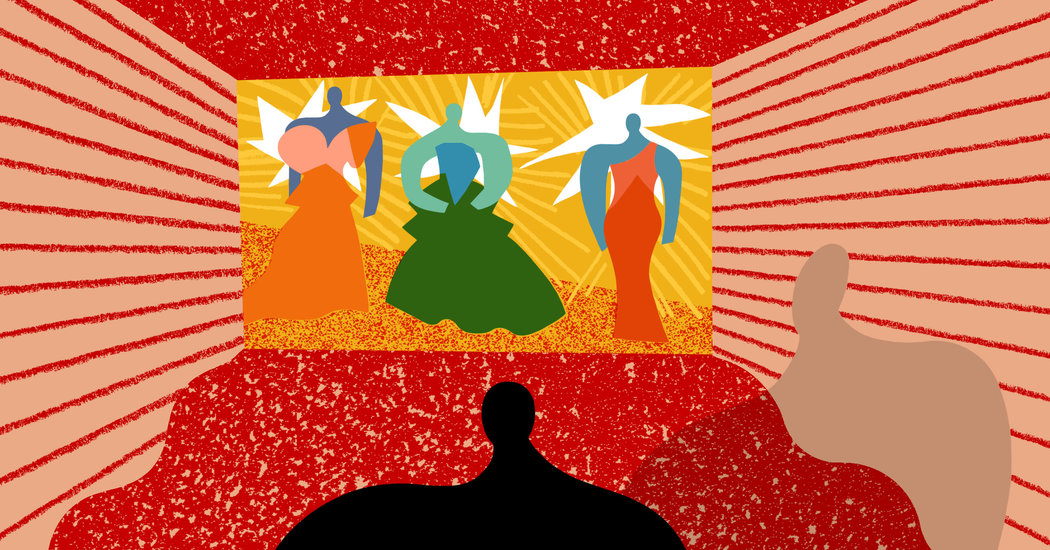 For most of my adult life, every winter when awards season rolled around I would get primed and ready to have an epic night. Not because I was an Oscar-nominated ingénue about to walk the red carpet in Valentino couture and Bulgari earrings, but because my mom’s red carpet commentary was the stuff of legend. At least, it was on my Facebook page, where I shamelessly posted screenshots of her best emoji-filled texts.

My passion for Hollywood red carpets was a surprise development. As a combat boot-wearing, feminist teenager in suburban Texas, I firmly rejected my mom’s mantra, “Always wear lipstick and blush.” I didn’t waste time on pedicures or highlights, and I didn’t have much use for awards shows or the spectacle of red carpets. My idea of a movie star was Heather Graham in “Drugstore Cowboy,” not Julia Roberts in “Pretty Woman.”

Back then I’d hole up in my room reading Goethe while my mom lived it up on the couch watching the Academy Awards. It was only later, once I left for college and realized that my mom was human and wise and witty (especially when it came to her celebrity insights) that my devotion to red carpets began.

Once I succumbed, watching awards shows and the hours of red carpet coverage that preceded them became a yearly ritual that I looked forward to for months. Almost overnight, I traded Goethe for Joan Rivers and Ross Mathews. Since my mom lived in Texas and I had moved to California, our yearly red carpet ritual consisted of manic texting throughout the show.

When I say “the show,” I mean from 2 p.m. Pacific time until the credits rolled after whatever awards ceremony the red carpet preceded. Then we’d move on to “Fashion Police” (R.I.P.) or whatever show was doing the “best and worst dressed” analysis. I would then call her first thing the next morning on my way to work to really get serious and discuss what she thought of the dresses, the makeup and the speeches.

Her review usually included some variation on the theme that Reese Witherspoon looked beautiful “because she’s Southern and knows the importance of lipstick.” It was always about the lipstick. When she got truly fed up, she’d return to her lifelong lament: “Stars like Elizabeth Taylor and Natalie Wood knew how to do glamour. Now they look like they just rolled out of bed.” Texts like this were usually followed by a very creative string of exasperated emojis.

Read More:  Could Screens' Blue Light Make You Old Before Your Time?

My mom once texted that if my sisters and I ever left the house dressed like Dakota Johnson on the Academy Awards red carpet she’d ground us (even though we were all well past grounding age). This was in 2017, when Ms. Johnson wore a high-necked, long-sleeved, golden-hued Gucci gown with a huge bow across the pelvis, which my mom thought looked “matronly.” She was old-school Texan. Some tasteful cleavage was always preferable to being fully covered up.

Two years before the Dakota Johnson debacle, in May 2015, my mom had been given a diagnosis of cancer. She kept her sense of humor and her love of celebrity gossip, but the frivolity of our red carpet bond took a turn toward something deeper.

That first year, naïve and desperate, I convinced myself that she would “beat” cancer. My sisters and I even created a “Mom Beats Cancer Party” event in our iPhone calendars for the following spring. The party never happened, and spring came and went, but she persevered, despite endless chemo treatments and experimental procedures. Through it all, though, she kept on watching.

I got three more red carpet seasons with my mom after she was diagnosed, and I cherished each one as if I were standing onstage in custom Oscar de la Renta accepting my Best Actress award. I knew the ritual wouldn’t last forever, so I held on tight, eagerly awaiting each witty text from my mom, saving it in my phone, and worrying as the night went on and those texts became more sporadic and less funny, meaning she was fatigued, or in pain, or both.

She passed away in November 2018, right before the relentless “countdown to the red carpet” coverage erupted on TV, online and all over social media. I couldn’t escape it. In the midst of my grief, I worried about the red carpet. I wondered if I should avoid it altogether, in case I died of sorrow imagining what my mom would be texting as Lady Gaga gushed to Giuliana Rancic about making art with Bradley Cooper. I also wondered if I should plant myself on the couch and watch as a form of penance. For what, I don’t know. Grief is funny that way. Maybe I felt that my mom would be angry if I gave up on a pastime she’d loved so deeply, just because she died. After several weeks spent agonizing over my decision, I decided to watch. I didn’t want to disappoint her.

Making it through the Golden Globes and the Academy Awards last winter without my mom felt like a milestone, but it was also surprisingly simple, free of emotional breakdowns. In my experience of grief, the toughest moments have been triggered by the most banal experiences, like the jingle in a car insurance commercial, which somehow churns up painful emotions and reminds you that she’s not here. The moments that you expect to break you, like speaking at the funeral or going back to work, seem to come and go.

There’s a tendency to believe that we’re supposed to move past grief, but some psychologists believe it’s more natural to have a continuing bond with the person who has died. It’s how we live with grief, and stay close to the ones we lose.

“We’re biologically motivated to maintain close relationships with a small amount of people in our lives,” says Dr. Katherine Shear, a professor of psychiatry and director of the Center for Complicated Grief at Columbia. “We map these people in our brains, and they are not erased when they die.”

I see the ritual of watching red carpet coverage as part of my continuing bond. It’s a way to keep my mom around, to keep her sense of humor alive and her voice from fading away, if only through the texts I imagine her sending.

This red carpet season, I won’t agonize over my decision to watch. I’ll tune in from the first celebrity interview to the final awards speech, and along the way I’ll imagine all of the texts my mom would send about Billy Porter’s legendary look or Reese Witherspoon’s lipstick choice.

As bittersweet as it is to watch without my mom, I want the fantasy and the spectacle to continue. Most of us don’t walk around in custom Dior or black velvet Christian Siriano tuxedo dresses, so sinking into the couch a few times a year to bask in the sparkle and shine of the red carpet is a welcome distraction, and a reminder that despite what it throws at you, life does go on, sometimes with the help of a few celebrities in diamond-studded gowns.

Dina Gachman is an Austin-based writer and the author of “Brokenomics.”