Gary Schwitzer is the founder of HealthNewsReview.org and has been its publisher for 14 years. He tweets as @garyschwitzer or as @HealthNewsRevu

I admire much of the great journalism being delivered by the New York Times on COVID-19 pandemic issues.

But I continue to be befuddled many weeks by the decision-making and editorial judgment of the Times’ Well column.  We have written several times about how unwell is the Well feature.

Today, one of our former physician-contributors, Adam Cifu, MD – a general Internist and professor of medicine at the University of Chicago, tweeted:

Here is the sort of lay press articles that checks all the boxes to get me to gnash my teeth. Unreviewed, unpublished article. The most surrogate endpoint. A paragraph that nods to the limitations but then goes on with no further acknowledgment of them. https://t.co/jCwiblY2M7

It was published in the New York edition of the paper today, Section D, Page 6, with the headline: “Social Distancing for Runners.”

An earlier version appeared online in a Well column 6 days ago, under the headline: For Runners, Is 15 Feet the New 6 Feet for Social Distancing?

And it’s based on a pre-print – something we wrote about to explain for readers earlier this month. 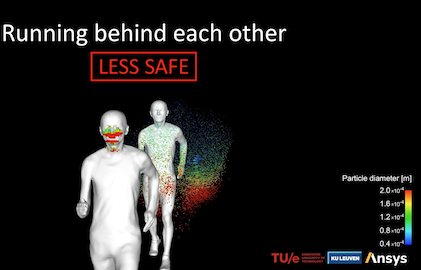 The online version’s two opening paragraphs actually seem to question the newsworthiness of the article. I’ve highlighted early caveats in the article:

It may be a good idea to give one another more than six feet of space while exercising outside during the current coronavirus pandemic, according to a compelling new study that looked at how air flows around bodies in motion. The study has not yet been published in a peer-reviewed journal and the results need further confirmation. But they indicate that runners and brisk walkers may create a wake of air behind them that could carry exhaled respiratory droplets for 15 feet or more, meaning that the droplets could reach people walking or jogging well behind them.

The findings, released last week as a brief white paper and accompanying series of animations, have been shared widely on social media and prompted some trepidation among people worried they demonstrate that sharing the outdoors with other exercisers, especially runners, raises infection risk. But the study, which has now been posted in full online, did not look at coronavirus particles specifically or how they are carried in respiratory droplets in real-life conditions. Nor does it prove or even suggest that infection risks rise if you do wind up temporarily strolling behind a panting runner.

But then the third paragraph delivers an editorial judgement:

Still, its calculations make sense. It finds that when we walk or run, the air moves differently around us than when we are still and the best way to maintain a proper social distance in that situation is to avoid slipstreams, the currents of air that follow a moving body.

And so it goes – back and forth – throughout the piece.

Read More:  Here’s Why You Should Use Deep Relaxing Breathing Techniques

In an email, Dr. Cifu wrote to me:

What bothers me most about the article is that it seems truly irresponsible. People right now are struggling. Safe exercise is one way to attempt to save some measure of sanity. This article identifies an unpublished and unreviewed manuscript, I think, becomes it comes with a video. The point made, that running behind someone might increase your risk of infection is plausible, but there is nothing in the “research” or this article that makes it more than the plausible it was before the research. To prove that we would need a trial (one that would be unethical to do) or at least proof that viable virus exists in high enough density to cause infection in the “slipstream.”

I love reading comments left by readers in response to NYT Well pieces.  Some excerpts this time:

As I write this, there have been 544 reader comments left online in response to the NYT Well story.  Those posted only offer a glimpse of the wisdom of the crowds.

I have written before that the Well staff would do well to read the reader comments, learn from them, and make adjustments in the future accordingly.