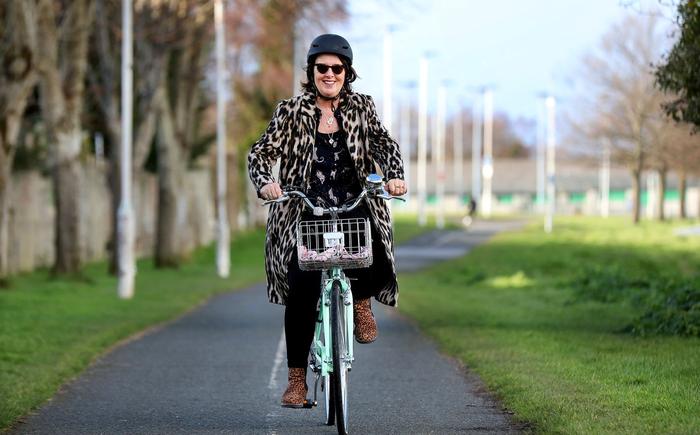 Ever since I visited Sweden and Denmark for the first time, two years ago, I have been dreaming of a new version of myself. This new me is slim and fit and sashays gracefully about on one of those pastel-hued, classic old bikes.

lternative me would cycle my way majestically to the library, to the local coffee shop and, of course, to my yoga class. They all look like they do yoga, those cool northern women. My alter ego would glide by on my way to the vegetable shop, because that me would only buy locally-grown produce and would actively support small businesses, unlike the current me who pays lip service to such aspirations but still shops in a large, glitzy supermarket with notions.

Scandi me would bike out of a morning to buy a newspaper, conscious of the need to support real journalism. She would return home to make coffee and read the day’s news while listening to classical music. In fact, this other me would be constantly aware of the climate crisis and would only use her car when absolutely necessary.

In fairness to the real me, I have avoided the temptation to dream up a Scandinavian partner to go with alternative me, because that would be mean. But I do dream that himself will also become a better version of himself, which will initially be signalled by his purchasing a bike rack for the car so that we can go on cycling weekends away.

We will pack healthy picnics into the wicker basket of my bike and cycle off to marvel at magnificent scenery visible only from the greenways of Ireland. We will be totally fabulous by the time we hit 60. And we will look at least a decade younger.

All this dreaming has remained just that and competes for space in my imagination with my other favourite dreams, namely the one of living on an island for a year and the one involving moving to the countryside permanently so that I can rehome some donkeys. I have spent many happy hours dreaming these dreams, often as I lounge about on the sofa, eating chocolate.

But those days are over. A diagnosis of type 2 diabetes meant that I have been hurled into overhauling my lifestyle and suddenly the dream of owning a bike and being a different me took on a new meaning.

Come springtime, I thought, when the weather is better and the days are longer, I might actually get a bike to help me get fitter.

I never anticipated that the bike of my dreams would in fact materialise at Dublin Airport just before Christmas, having made the journey from Western Australia. And yeah, yeah. I can hear you mutter about air miles and carbon emissions and all that. But bear with me. The bike came as part of my granddaughter’s baggage allowance and it was my daughter’s idea to bring it with them from their home in Perth, as my Christmas present.

As I type, Sheila (well, what else would I call her) is parked behind me. She is a soft mint green, is elegant and has a gorgeous, large, old-fashioned bell and a basket. Best of all, she has a big, fat, wide-ass saddle. I love her so much that I cannot bear to store her in the shed, with the lawnmower, old tins of paint and a clatter of spiders. So, she lives in my office where she makes my heart sing and gets in my way.

I bought myself a helmet, which apparently goes with Sheila’s old-fashioned vibe but makes me look like a geriatric World War Two German soldier. So, a few weeks ago it was time for Sheila’s virgin voyage. And time for me to prove that ‘it really is like riding a bike’.

And let me tell you that yes, I can remember how to ride a bike. I can balance and move my legs on the pedals for forward propulsion but I soon discovered that I had forgotten some of the finer details such as getting on and off Sheila with any, well not even grace, but just efficiency.

Getting on, pushing off and starting to pedal in the required direction involves a level of multitasking that initially deserted me. I am sure the neighbours were much amused.

Once I got going, things were not too bad until I realised, I had gears. Gears. No one mentioned gears. My childhood bikes never had gears. Do they work on the same basis as my car? You know, second for going uphill and fourth or fifth when cruising along… I decided to assume they did.

My second important discovery is that the world isn’t flat. Most roads and cycle tracks may look reasonably level but they hide secret gradients that only become apparent as your peddling becomes less effective.

Lower gears are of limited usefulness when you are hobbled by a poor level of fitness, so that your progress becomes slower and slower until you realise that you are not going anywhere at all and your bike is actually about to go over.

This forces you to attempt a rather rapid dismount before both you and the bike crash to the ground. In an effort to retain some semblance of bike street cred, I try to give the impression that I actually meant to stop, something best achieved by grabbing my phone in order to answer an imaginary urgent phone call.

In my car, I can parallel park. I can judge the space my car requires quite well. I am fond of muttering to other drivers “ah here, you could get a double decker through that gap”. But, for some reason, judging distance and speed when on my bike remains a mystery. For example, when attempting to overtake a family out for a walk, I am never certain that I have enough room to pass them safely and have on occasion veered into the grass, which throws steering and balance into chaos.

And what is the etiquette involved in overtaking walkers? Should I ring my bell to announce my approach or should bell ringing, like beeping the car horn, be reserved for serious situations? I usually resort to kind of muttering loudly “oh hello, em thank you” as I wobble past.

In fact, wobbling is a constant hazard. The other day I was crossing a road and there was a little kerb up onto the cycle lane. At the last minute I decided that ‘bumping’ up onto it might be a mistake and so executed an urgent swerve-and-stop accompanied by another inelegant dismount, much I am sure, to the amusement of passing motorists.

But for all of that, there have been

moments when I am heading down a hill, on a deserted cycle track, the wind in my hair and I am 10 years old again. I have recently gained enough confidence to take one hand off my handlebars, which is useful for signalling that I am going around a corner.

The cool and calm elegance of the women of Copenhagen or Malmo remains a far-off dream but Sheila and I are very much in the early stages of our relationship. However, the signs are positive. The other day I even heard himself wonder aloud about getting a bike rack for the car.