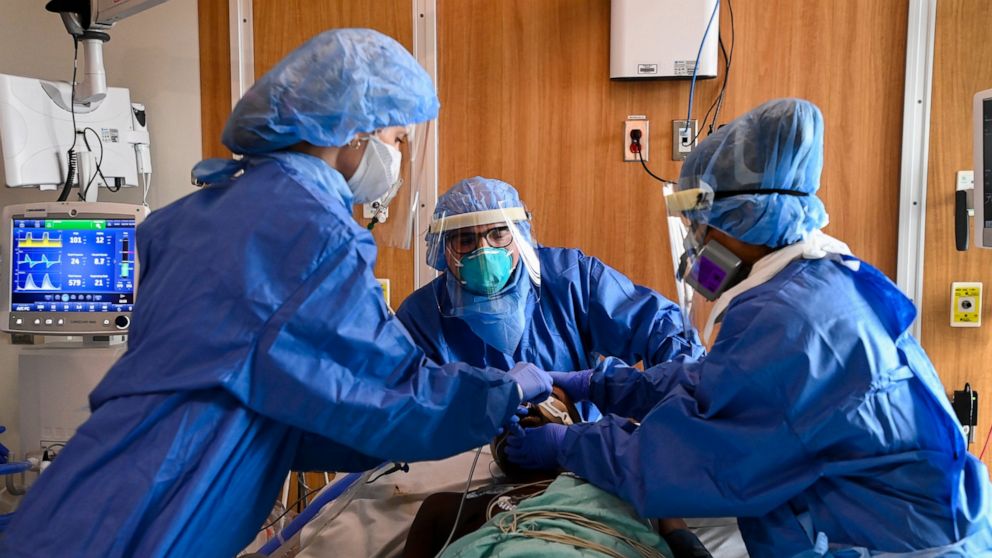 TORONTO — The premier of Canada’s most populous province said Friday he will be limiting outdoor gatherings to those in the same household and will close playgrounds and golf courses amid a record wave of coronavirus infections fueled by variants.

Police in Ontario will have the authority to require any individual not at home to provide a reason that they’re out and provide their address. Tickets can be written.

Ontario Premier Doug Ford said those who live alone will be able to meet someone from another household outside.

Interprovincial travel will also be limited. Big box stores will be limited to 25 percent capacity. Schools are already closed and students will resume online learning next week.

Ford complained about crowded parks and playgrounds, but made no mention of workplaces where the virus is spreading.

Ford blamed a lack of vaccines but made no mention of Prime Minister Justin Trudeau’s announcement that Pfizer is doubling the amount of vaccines to Canada over the next month and getting millions more in May and June.

Procurement Minister Anita Anand said in total Canada will receive between 48 million and 50 million doses by the end of June. Canada has a population of 38 million and all eligible Canadians are expected to get at least one dose by July

“Ontario has reached out for more support. I can tell you today that we are standing by to deploy the Canadian Red Cross to help with their mobile vaccination teams. This is about getting doses to people where the situation is most serious,” Trudeau said.

Read More:  What We Learned in 2019: Health and Medicine

A spokesperson for Ontario’s premier denied it had asked for help.

“We do not have a capacity issue, we have a supply issue,” said Ivana Yelich, a spokesperson for Ontario’s premier.

Ontario, however, is pleading with other provinces to send nurses and other health workers. In a letter to all provinces and territories, the Ontario government noted it is short thousands of nurses. The deputy minister of health, Helen Angus, also asked whether her counterparts have any resources to spare. Her letter says the pandemic has strained hospital capacity, particularly intensive care.

Angus estimated Ontario will be short 4,145 nurses in the hospital sector alone over the next four months.

“We are projecting a need for this critical support for four months following the anticipated peak of the third wave,” Angus wrote.

Trudeau said this is likely the final and toughest stretch of the pandemic, but he announced Canada will receive 4 million additional Pfizer vaccine doses in May, another 2 million in June, and 2 million more in July.

With those additions, the the country of 38 million people will get 24 million Pfizer doses through June. Moderna, meanwhile, said it will ship 650,000 doses of its vaccine to Canada by the end of the month, instead of the expected 1.2 million.

Canada is getting its first Johnson & Johnson shipment later this month, 300,000 doses.

Vaccinations have ramped up in Canada but a lack of stronger restrictions in Ontario led to a third wave.

Dr. Andrew Morris, a professor of infectious diseases at the University of Toronto and the medical director of the Antimicrobial Stewardship Program at Sinai-University Health Network, said Ford’s government has learned “zilch” of how the virus is transmitted and is government is “morally bankrupt.”

Read More:  Can we halt multiple sclerosis? Catherine Lubetzki is finding out how

“Zero support for essential workers: I am absolutely disgusted. This is criminal,” Morris tweeted.

Sumon Chakrabarti, an infectious disease doctor in Mississauga, Ontario, said he was very disappointed with the decision to close playgrounds and limit outdoor activities. “Unintended consequence is this going to drive people indoors where risk of transmission is higher,” he tweeted.

Toronto Mayor John Tory said he is very concerned about arbitrary stops of people by police at any time. The Canadian Civil Liberties Association said granting police the authority to stop and question anyone at random risks a “rash of racial profiling” and said random police stops during COVID are unconstitutional.

His team predicts more than 30,000 new infections a day by the end of next month unless strict measures are taken.