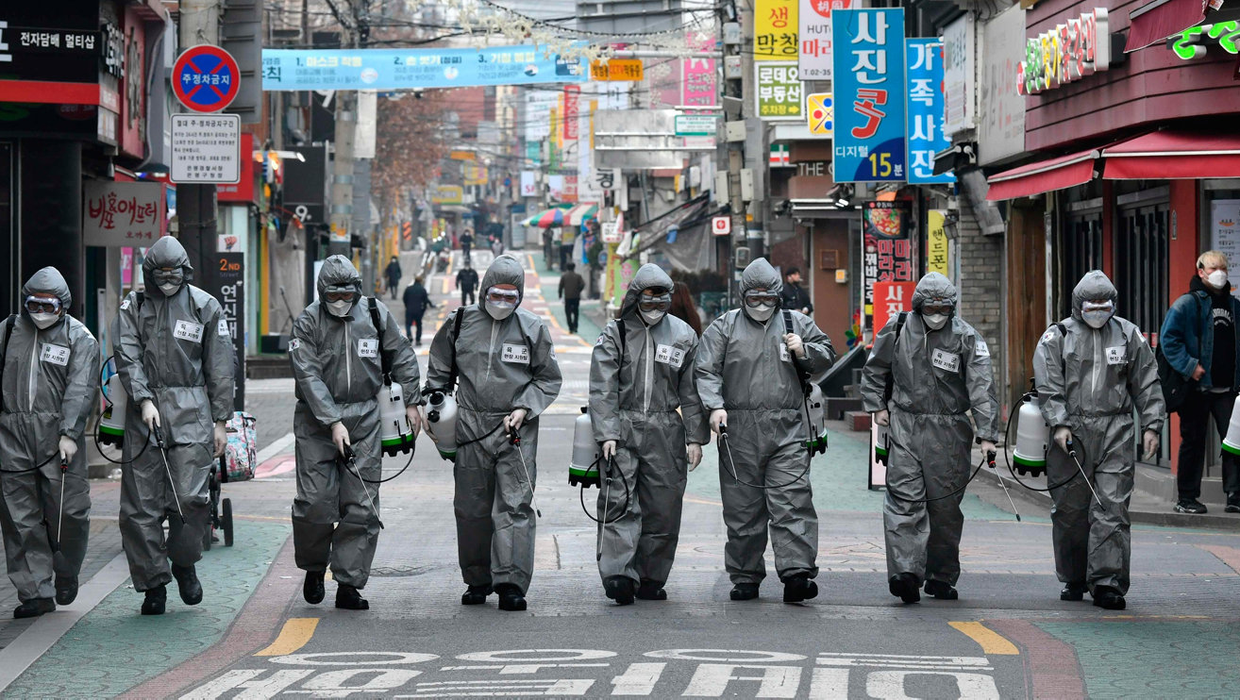 It was surely only a matter of time before the slogan ‘Keep Calm and Wash Your Hands’ became a meme. A timely reminder to keep a level-head in the face of rising panic, the slogan has been circulating on social media for the last week or so, as the numbers of infections and deaths from Coronavirus continue, apparently inexorably, to climb and even the most phlegmatic amongst us struggle not to get carried away in a growing atmosphere of alarm.

e are all, it’s fair to say, pretty concerned. But what about those of us who are already predisposed to excessive worry? Almost one in five people, for example, have an anxiety disorder. For those with mental health problems, hours of any ordinary day can be spent fire-fighting panic and dread. So how does a catastrophist keep perspective at a time when the threat is increasingly real?

For as long as I can remember, I’ve worried, sometimes to the point of obsession, about health. Both my own and the health of those I love. In 2014, I did a course of cognitive behavioural therapy which helped me recognise that my habit of losing hours searching symptoms on Google and rushing to the doctor at the slightest ache or pain was only compounding the problem. It would be better to try to tune out health news updates and think about something else instead.

In the context of a potential global pandemic, there’s a cognitive dissonance happening for people, like me, prone to a dysfunctional level of hypervigilance about health. We try to remind ourselves that hypervigilance is irrational and dysfunctional. But if ever vigilance was required and appropriate, it’s now. The public health messages currently being circulated are insisting that the general public exercise unprecedented levels of caution, and world-renowned scientists are going on record to warn us to prepare for the worst-case scenario.

The gravity of the situation as Covid-19 spreads around the world remains unclear. But wherever there is a public health crisis, mental health sequelae are sure to follow. In Hong Kong, one of the worst-affected regions globally, where much of the country is on lockdown, Reuters reported on an “unprecedented” number of mental health issues becoming apparent. There, where there has been recent social unrest and nightmare memories of the 2002 SARS outbreak remain fresh, a recent survey suggested that as much as a third of the population have symptoms of PTSD and Samaritans Hong Kong have observed a sharp rise in the number of people seeking support.

We are, or course, a long way from this scenario in Ireland. Paul Fearon is Medical Director of St Patrick’s Mental Health Services. In his view, with only six cases confirmed in the Republic at the time of writing, Coronavirus is not yet exacting a heavy toll on the nation’s mental health. But there a realistic chance it might.

“You can imagine somebody with OCD, who has a ritual about cleanliness and sanitation, if they have a fear of contamination, that their symptoms – hand-washing, whatever it might be – will deteriorate. There’s some evidence that psychotic symptoms, symptoms associated with schizophrenia like delusions, can get worse. And, of course, insomnia and depression can get worse during these phases.”

Read More:  As renewed debate over health care reform begins to simmer in Washington, can journalists give the topic the attention it needs?

And if the worst happens and a contained threat evolves into a significant outbreak, Fearson believes an awareness of the psychiatric sequelae, as well as the physical health toll, both for the survivors of the illness and for people who have to self-isolate, will be vital.

“We also know from the SARS outbreak that, in survivors of SARS, there was an increase in anxiety and depression, panic attacks, psychotic symptoms and even suicidality and delirium,” he says. “And if significant numbers of people are going to have to self-isolate for two weeks or more, there is one research from previous outbreaks about the effects of isolation… There is a whole broad range of psychological and psychiatric sequelae related to both the phase of containment, when people are fearful, and also if there is an actual outbreak, that need to be taken on board and planned ahead for.”

He’s at pains to stress though, at the moment, the situation in Ireland appears to be contained and that much of the coverage of the issue on social media seems “quite alarmist and anxiety-provoking”.

Part of the problem is our ever-connected way of life. “We live in a world now where the availability of information both true and false is just so ever-present in our lives, and we have an expectation to be updated on things and have information at our fingertips,” he says.

In this context, information-seeking can easily become compulsive. One of the central features of anxiety disorders is an intolerance of uncertainty, and “here we are presented with a situation which appears to be spreading worldwide, and where we don’t know everything that we’d like to know about it yet… we don’t know how it’s going to play out”.

In this context, he says “the first most important thing, if you are anxious about this, while everybody has concerns about it obviously, is to stick to a trusted source of information”.

He suggests referring only to the HSE website or Health Protection Surveillance Centre. The latter, he says, “is the best, single-most reliable source of information that anybody in Ireland has about what to do and what the current state of play is. It’s very tempting when you don’t find the answers you want to go to other websites or social media”.

However, he advises against that.

“There’s an awful lot we can do when we feel helpless,” he adds. Focus on “the basics” by washing your hands and practising good respiratory hygiene.

For anyone feeling heightened symptoms of anxiety, he suggests “taking a moment to think, ‘I’m anxious, but is there anybody I know – family, relatives, friends – who might be feeling more anxious than I am?’.” This he says, can be a useful way of “deflecting some of that anxiety and using it as an almost altruistic, community-spirited way to make sure that those around us are okay”.

It’s also a good way to avoid feeling isolated. “Often when we get anxious about something or scared about something, we clam into ourselves and we let the thoughts escalate, whereas if we are actually talking to someone else who maybe shares similar anxieties or even has more exaggerated anxieties, it can often be a way of distracting yourself from your own anxieties. Talking through those anxieties, even if they are shared, is often a way of putting them into perspective.”