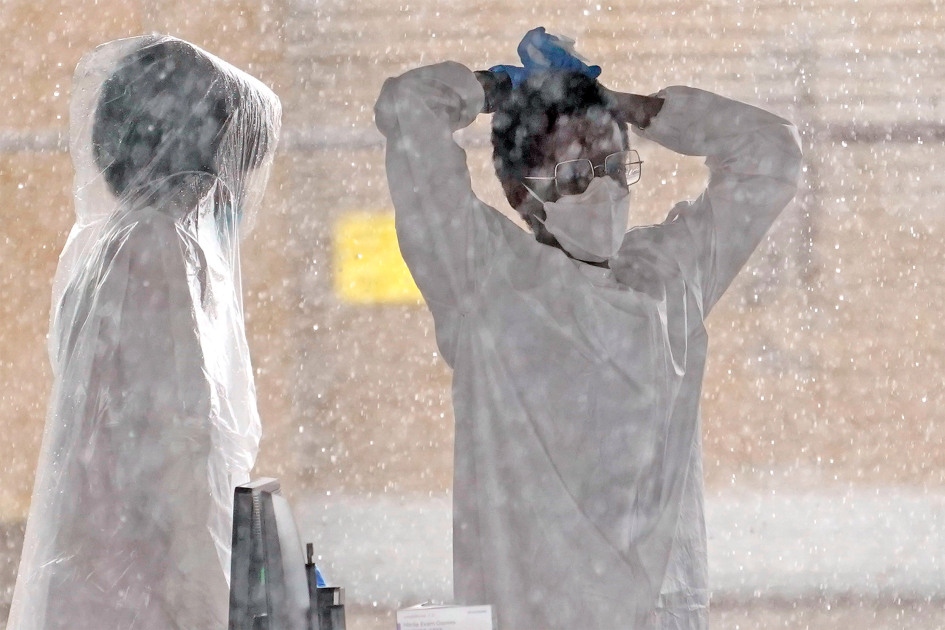 This is part of our Coronavirus Update series in which Harvard specialists in epidemiology, infectious disease, economics, politics, and other disciplines offer insights into what the latest developments in the COVID-19 outbreak may bring.

Harvard public health experts said the nation’s COVID-19 epidemic is getting “quite out of hand” and that, with cases rising rapidly in the hardest-hit states and a two-week lag between infection and hospitalization, the situation appears set to worsen quickly.

“I have this awful feeling of déjà vu, like it’s March all over again,” said William Hanage, associate professor of epidemiology at the Harvard T.H. Chan School of Public Health.

Hanage, who spoke with reporters during a conference call Thursday morning, said that hospitals are nearing capacity in Arizona and Houston and are likely to be stressed elsewhere soon. And, in contrast to the nation’s early spike in COVID-19 cases that were concentrated in a few states, the current surge is much more widespread and so has greater potential to take off.

“The increases that we’re seeing right now have the capacity to cause far more disease in the future,” Hanage said.

Barry Bloom, the Joan L. and Julius H. Jacobson Research Professor of Public Health, who also fielded reporters’ questions Thursday, said other countries have shown that the epidemic can be contained by acting swiftly when cases appear. Even Italy, once on the verge of health system collapse, has regained control of its epidemic, Bloom said. Italy on Tuesday reported just 113 new cases and 18 deaths.

“If you only look at what you see today, you’re three weeks behind the curve. … It’s trying to imagine what will be three weeks from now … that should be determining policy.”

Hanage said he understands political leaders’ reluctance to reimpose lockdowns, but with few tools to fight the coronavirus and more moderate steps like masking and hand-washing most effective when numbers are also more moderate, a shutdown may turn out to be what’s needed.

“Let me be clear: I do not like shutdowns. But if they’re the only thing to prevent a worse catastrophe, you have to use them,” Hanage said.

A bright spot in the current epidemic is that the age of those contracting COVID-19 appears to be declining. Hanage said that he didn’t view it as a sign of the epidemic evolving, but rather a marker of testing being more widespread and catching more cases than during the March-April spike. Though younger people have better survival rates, that good news is tempered by the fact that we’ve been largely ineffective at keeping the virus away from those most susceptible for severe illness: the elderly and people with pre-existing conditions. But that may nonetheless mean there is a window of opportunity to suppress the epidemic before it takes hold among those more vulnerable populations.

“Let me be clear: I do not like shutdowns. But if they’re the only thing to prevent a worse catastrophe, you have to use them.”

“If there is a window of action, it’s now,” Hanage said.

Hanage struck a similar note on lower death rates in the current spike, saying deaths lag behind cases, so we should wait for a few weeks before concluding that anything different is going on.

Bloom said the difference between the U.S. and nations where the pandemic appears to be controlled is that those countries had uniform national policies and didn’t lift lockdowns until case numbers were very low. The fact that some of them have experienced new outbreaks — like the recent spate of cases in Beijing — is to be expected. Once the local epidemic is controlled, easing the lockdown will inevitably lead to new cases. The strategy then is to use testing to quickly identify cases and use contact tracing and isolation to contain outbreaks before they become widespread. In a state like California, with 7,000 new cases reported Tuesday, tracing the contacts of each positive test becomes a monumental task.

Rather than flinging the doors wide, the two said reopening should more closely resemble refining the shutdown, letting some things resume with safeguards in place that can be tightened should cases rise. Leaders should consider risk versus value to society in deciding what to reopen and when. For instance, bars, casinos, and churches, where people are crammed together and which have been shown to be hotspots of infection in some instances, may need to stay closed in order to keep the overall infection rate in the community low enough that we can safely reopen places with broad societal benefit, Bloom and Hanage said.

Read More:  WHO warns of global shortage of medical equipment to fight coronavirus

“We should be wanting to be able to open schools, and schools should have a higher priority, arguably, than other parts of the economy,” Hanage said. “What those [other parts of the economy to reopen] are, ought to be debated. … What we should be thinking about in reopening is not reopening everything in a safe way, but which things we want to reopen and being able to do that without enhancing community transmission.”

Even well-honed strategies will fail if citizens are noncompliant, however, Bloom said. In New York City, contact tracing programs have run into people not answering phones or refusing to isolate after hearing they’ve been exposed to infection.

“If people are ignoring the epidemic, it’s going to be very hard to control,” Bloom said, “and leadership should be inspiring people to be more cautions.”