People who drink a glass of wine a day have a lower risk of depression than tee-totallers, study finds

People who drink a glass of wine a day appeared to have a lower risk of depression than tee-totallers in a new study.

They found the people with the best mental health drank up to 14 units of alcohol a week – the equivalent of 10 pints of beer, and a little less than 10 glasses of wine.

Those who never drank alcohol had a 70-percent higher risk of depression, and hazardous binge-drinkers were 80 percent more likely to suffer. 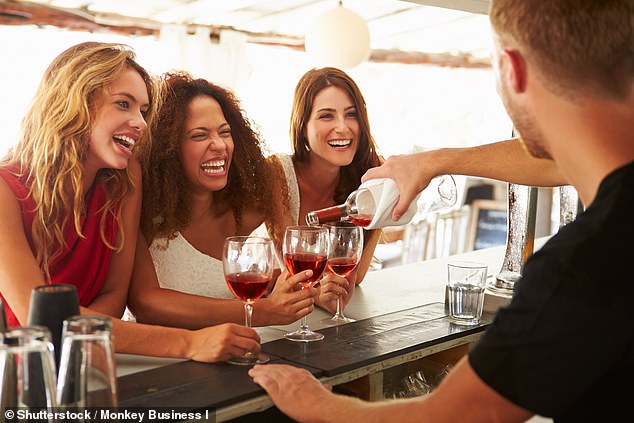 Other health aspects aside, the new study found alcohol at least seemed to be tied to good mental health

While alcohol – particularly excessive drinking – is a risk factor for depression, plenty of studies have shown there can be a sweet spot.

Indeed, in all but one of the Blue Zones – the seven places in the world with the best health and longest life expectancy – most people have a drink a day.

It is not universally beneficial; women, particularly younger women, have higher risks than men of developing heart disease, cancer, and other health issues from drinking alcohol.

And a study this month found a glass of wine a night raises the risk of a stroke.

And the new study, published in Acta Psychiatrica Scandinavica, which is part of the peer-reviewed Wiley journals, found that, other health aspects aside, alcohol at least seemed to be tied to good mental health.

One caveat is that it’s not clear whether the people without depression just happened to be the ones drinking, rather than alcohol being an aid to their joy.

But psychologist Sir Cary Lynn Cooper told the Sun the concept that alcohol can boost your mood has merit.

‘Going to the pub helps people unburden themselves,’ Cooper said.

‘The tricky bit is knowing how much — too much is bad for mental and physical health.’