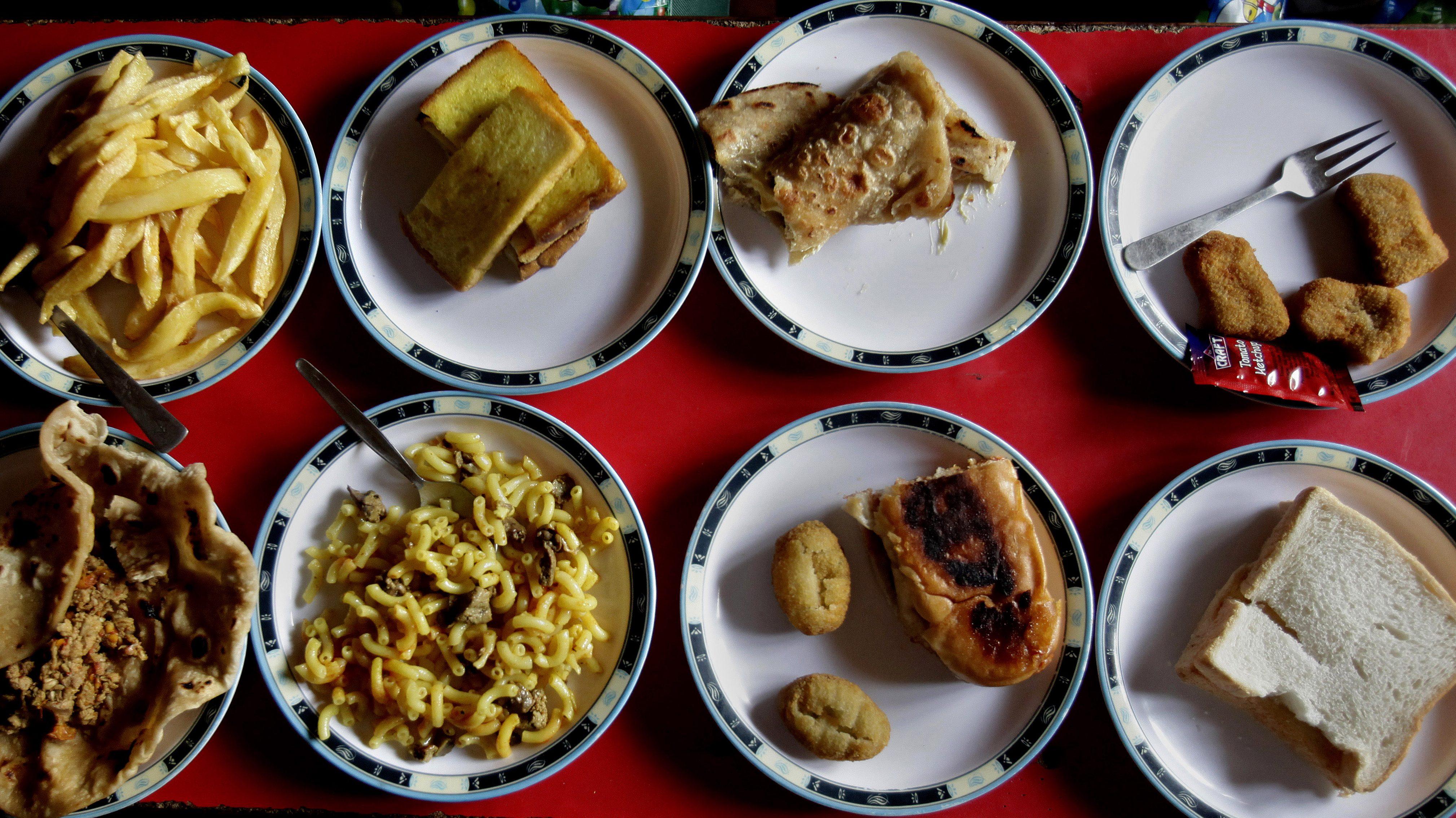 The reality is that although there are certain habits most doctors and nutritionists would encourage for good health—eating more fruits and vegetables, exercising regularly, getting enough sleep—there is no one weight-loss system that works for everyone (and certainly not an “effortless” one). Increasingly, the consensus is that dieting, on the whole, doesn’t work, and that body size is not necessarily a good metric for health.

Despite that, the diet industry—with its books, apps, programs, packaged foods, and supplements—was worth an estimated $ 66 billion in 2018. The enduring popularity of diets speaks to our deep confusion around body size, health, and food.

Even as I wrote this story in a café, I overhead a woman confidently recommend that her dining companion dust her coffee with cinnamon to “help control your blood sugar.” (There’s no evidence the spice has this effect.) And indeed, so much of modern diet culture is based around this sort of “one weird trick” thinking: Just cut out all carbs, or don’t eat fruit, or practice mindfulness at mealtime, or fast two days a week, and you’ll crack the code of weight loss.

Into this crowded marketplace has come a new weight-loss strategy that has been gaining attention, and doesn’t sound at all like a weird trick or a new fad. In fact, it sounds like something your grandmother would have sworn by to keep her figure: portion control.

As a weight-loss strategy, portion control has obvious appeal—it’s simple and doesn’t rely on new theories of biology. And it feels like common sense: Smaller portions mean fewer calories. But it also reveals just how much about weight loss and nutrition we don’t actually grasp, and how seemingly helpful information, like the portion sizes on food labels, can deepen that confusion.

Instead of drastically limiting the foods you’re “allowed” to eat (like the Whole30, Keto, or Paleo diets), portion control doesn’t usually ban foods. Neither WW nor Noom, weight-loss programs that have participants track and count their intake, tell you precisely what to eat. Instead they set limits on how much, in the form of a number of “points” or calories, you can consume on a daily basis.

In the community that has grown up around WW (a rebrand of the company formerly known as Weight Watchers, with the tagline “Wellness that works”), there are hundreds of articles, blog posts and Pinterest pins dedicated to outlining ways to eat without racking up points. Points aren’t directly equivalent to calories, but the message is clear—the less food you eat, the better.

Of course, that’s not always true. Despite the often-cited maxim that weight loss is as simple as burning more calories than you consume, a growing body of research suggests that weight loss is far more complex, and that the nutritional information on food labels isn’t as clear cut as it might seem. “The more we probe, the more we realise that tallying calories will do little to help us control our weight or even maintain a healthy diet,” the Economist reported recently. “The beguiling simplicity of counting calories in and calories out is dangerously flawed.”

Read More:  How does multivitamin work

Calories represent stored energy, and are calculated based on the amount of heat produced when a food is burned. The human digestive system though, involves many more variables than an oven. In the US, it’s legal for calorie counts on packaging to be off by up to 20 percent, the Economist explained. What’s more, even when the count is accurate, different bodies process calories in different ways. “The calorie as a scientific measurement is not in dispute,” the Economist reported. “But calculating the exact calorific content of food is far harder than the confidently precise numbers displayed on food packets suggest.”

Nutritionists who embrace an “intuitive” approach to eating (another growing trend, but one that pointedly eschews food rules and diet products and doesn’t promote or promise weight loss), say that the emphasis on the amount of food we eat—all that weighing of pasta portions, and doling out of tablespoons of hummus—undermines our internal system of satiety and appetite, which should tell us when to eat and when to stop eating.

“It reinforces the messages that we see in diet culture, which is you cannot trust your body to tell you what, when, and how much to eat,” Dr. Laura Thomas, a registered nutritionist in the UK, and author of Just Eat It told me over the phone. “Therefore you need rules, you need restrictions in place. You need these guidelines. And again, it’s undermining that trust that we have in our bodies to self-regulate.”

The guru of portion control is Dr. Lisa Young, a registered dietitian and adjunct professor of nutrition at New York University whose outrage about growing portion size has become her personal brand.

Young came to prominence as the researcher in the documentary Super Size Me who points out how much larger typical portion sizes have gotten in restaurants over time. In that seminal film, she highlights how the smallest order of fries on the menu at many fast food restaurants used to be the only size available, and points out that the largest soda cups at many convenience stores clock in at a full half-gallon of sugary liquid.

These giant portions warp our perception of how much we should eat, she argues in a new book, Finally Full, Finally Slim. And our actual dinnerware has gotten bigger over time as well, she says. “We get used to these big portions, and plates have gotten bigger,” she said in a phone call. “They’re not the same size as our grandmother’s stuff.”

Young, like many others in nutritional science, is a critic of fad diets. “It’s really not that complicated,” she says of maintaining a healthy diet. “Fads come and go and we want to jump on it. Like whether it’s celery juice, whether it’s kale, whether it’s cauliflower, there’s no miracle diet and there’s no miracle ingredient—period.” She maintains that eating from smaller plates—using a salad plate or pulling your grandparents’ china out of the cabinet—and filling it half full of vegetables is a solid starting place for a healthy diet, and potentially for weight loss as well.

“Portion control is a lifestyle issue,” she said. “And it doesn’t mean you have to eat tiny portions.”

Thomas agreed that super-sized restaurant meals have the power to distort our thinking around how much food we need. But the portion control movement is just more of the same, she argues. Both interfere with our internal cues about how much we need to eat, which may fluctuate on a daily basis. And portion control’s sharp focus on the amount of food being consumed, Thomas added, could contribute to disordered eating patterns.

The problem with food labels

A central, and problematic, aspect of portion control is the nutrition labels on packaged food. As it becomes increasingly clear that individual bodies use calories in different ways, it’s also becoming clear that the food labels we rely upon to tell us how many calories we’re eating are far from the precise measure we have assumed they are. The Economist found that calorie counts on labels were off by an average of 8 percent, and that frozen foods can understate calorie content by up to 70 percent.

The way portion sizes are calculated for labels is also impossibly confusing. In 2018, the US Food and Drug Administration unveiled new food labeling requirements, including updated (larger) portion sizes. Many consumers believe these portions to be suggested serving sizes, which they are not. As the FDA explains:

Young argues that the serving sizes on labels are problematic because they suggest that the government is saying that these foods, in these amounts are healthy—that 12 ounces of soda is a good choice because it’s the proper amount of soda. “People think it’s what the government is recommending,” Young says. She also notes that because those servings are based on self-reported surveys, they’re not accurate: “People don’t have two-thirds of a cup of ice cream. They have more like a cup-and-a-half.”

All this emphasis on the measurements echoes diet culture’s insistence that your body cannot be trusted, that you must rely on an external authority when it comes to how much food to consume. A label doesn’t know that you’re extra hungry because you missed lunch, or that a spoonful of ice cream standing by the freezer is all that you crave, not a whole scoop. And even if it’s not the intent, most consumers read portion sizes on nutrition labels as an indication that unless you’re eating that specific amount, you’re doing it wrong.

Read More:  Where can i buy diet snapple peach tea

A way to deflect blame

Another problem with portion control is the movement can be co-opted to deflect the pressure on food companies to mass-produce healthier foods.

The National Consumer League is leading a campaign to emphasize portion size in the next set of dietary guidelines, which the US Department of Agriculture adjusts every five years and is slated for an update in 2020. In February the NCL sent a letter to the USDA, co-signed by several of big food’s industry groups—the American Frozen Food Institute, American Beverage Association, Grocery Manufacturers Association, National Confectioners Association, Sugar Association, and the Sustainable Food Policy Alliance. “One promising, and we think underutilized, strategy for tackling the obesity epidemic is helping consumers understand and implement appropriate portion control,” it wrote.

This message is problematic for eaters, both Thomas and Young agree, because it says that it’s how much food we eat, not the types of foods we choose, that have the greatest impact on our health. Young noted that placing responsibility, in the form of portion size, onto the consumer makes it seem like all foods are equally nutritious so long as we eat the “right” amount. She said that just because a snack comes in a small portion, like a 100-calorie package of chips, that doesn’t mean it’s a good choice nutritionally speaking.

By the same token, it may be perfectly fine to eat more than one portion of a food, depending on what that food is and your nutritional needs. “A portion size depends on your hunger and satiety cues,” says Thomas. “It doesn’t depend on these arbitrary labels.” She gave the example of a client who found herself confronted with a tub of hummus with a label saying it contained four servings. “She ate half the tub of hummus and she ended up feeling really guilty,” Thomas says. “She was basically self flagellating about eating half of a pot of hummus—and it’s fucking crushed chickpeas!”

Most of us spend our days surrounded by food we don’t actually need for survival, and spend our lives in bodies that look different than what has been held up as ideal. Portion control pits us against ourselves by making external rules—plate size, numbers on a label—the arbiter of our appetites rather than our actual hunger. It also denies that humans sometimes eat for reasons that have nothing to do with fueling our bodies, that pleasure is a legitimate thing to expect from food.

A healthy relationship with food, Thomas says, requires a person to “understand what your body is asking for and respond to that… Both in terms of your hunger and fullness levels, but also things like pleasure and satisfaction.” There’s no easy way to measure that.