Number of NHS staff happy with their pay fell in 2020 to 36.7% – with almost HALF of medics taking time off with work-related stress during the Covid pandemic, survey finds

The number of NHS staff happy with how much they are paid dropped in 2020, data showed today.

Just 36.7 per cent of nearly 600,000 medics polled before the second wave of Covid spiralled out of control were ‘satisfied’ with their salary, compared with 38 per cent the year before.

Charities said the findings were a ‘stark reminder’ as to why No10’s 1 per cent pay rise for NHS medics was ‘so disrespectful after the last year’.

Unions have threatened strikes over the ‘insulting’ increase. Boris Johnson yesterday hinted that ministers could still U-turn on the move because nurses could be treated ‘exceptionally’.

Separate data from the NHS’s annual workforce survey found almost half of staff say they were sick with stress during the pandemic. Forty-four per cent reported work-related burnout — a record high. For comparison, the figure was 40 per cent in 2019.

Medical chiefs have repeatedly warned about the stress frontline NHS workers are facing and said they are worried that many will leave when the pandemic is over.

But the number of people who said they were planning to leave the NHS soon was lower than in previous years, at 18 per cent or one in six.

The results of the survey come as NHS data today show record numbers of people are facing long waits for surgery, cancer appointments and other procedures and experts warn staff are exhausted and face even more work in the post-Covid era. 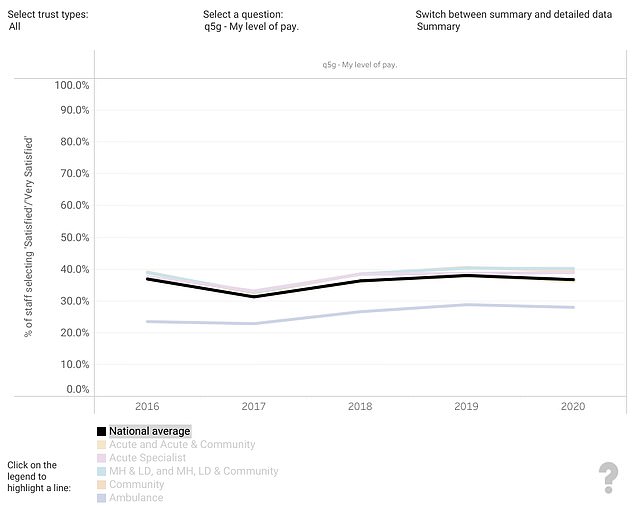 Read More:  20 Easy Pantry Meal Ideas to Make from Staples You Have on Hand

Just 36.7 per cent of nearly 600,000 medics polled before the second wave of Covid spiralled out of control were ‘satisfied’ with their salary, compared with 38 per cent the year before 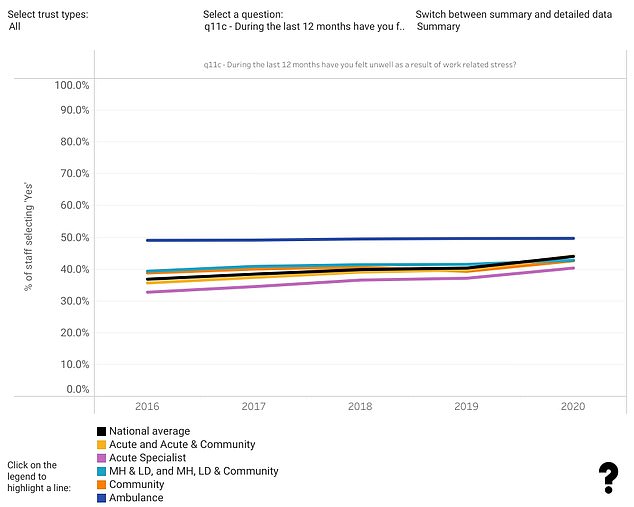 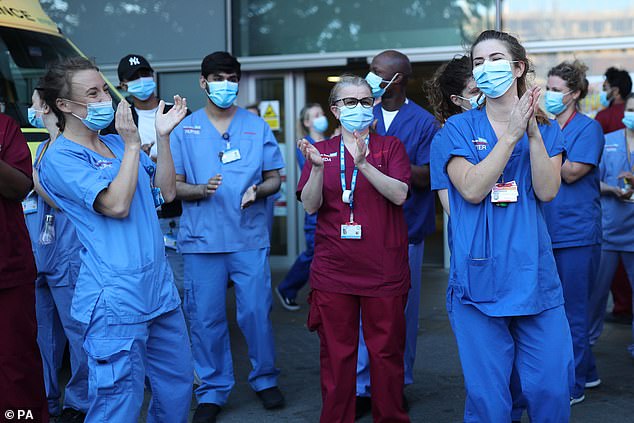 Almost half of NHS staff say their health has suffered because of work-related stress in 2020 (Pictured: Medical workers at the Royal London Hospital in May last year)

Increases in work-related stress were steepest in hospitals, the annual survey found.

The past year has seen NHS staff face huge pressures in dealing with the Covid-19 pandemic.

Some 595,270 NHS employees in England responded to the NHS Staff Survey 2020, which was carried out between September and December last year.

Findings also revealed that 46 per cent of staff said they had gone to work despite feeling unwell in the previous three months, a drop from 57 per cent in 2019 – people have been urged not to go to work when they feel ill in case they have coronavirus.

Almost a fifth of staff are considering leaving the NHS – although this has fallen slightly since 2019, from 19.6 per cent to 18.2 per cent.

The Government’s minister for care, Helen Whately, said: ‘The past year has undoubtedly demanded more from the NHS workforce than any other point in the health service’s history, and this year’s staff survey is a vital tool for hearing staff views…

Routine treatment waiting list is at record high 4.59million people in England, up from 4.52m in December.

Proportion of people seen by a cancer specialist within two weeks of warning sign drops to 83.4%, a record low.

More people waiting over a month to start cancer treatment after being diagnosed – 6% of patients.

‘There has been a welcome fall in the number of staff experiencing abhorrent harassment, bullying or abuse.

‘However I am disappointed to see a small rise in the number of staff who have experienced discrimination because of their ethnic background. We have zero tolerance for any kind of violence or discrimination in the NHS and I’m determined to put a stop to this.

‘Areas do remain where we need to do more. We will help staff recover from this pandemic, with investments in mental health support and professional development, along with our commitment to recruiting more doctors, nurses and health support workers so our NHS has the staff it needs.’

Danny Mortimer, chief executive of the NHS Confederation, said the general findings were encouraging but there were ‘significant areas of concern’.

He said: ‘The overall picture is encouraging given the unprecedented and most challenging of times NHS staff have worked through over the past 12 months.

‘There are, though, significant areas of concern and the recent data on the continued poorer experience of ethnic minority staff starkly reminds NHS leaders that staff experience varies unacceptably in their organisations.’

He said with nearly one in five people thinking of leaving the health service, there can be ‘no room for complacency’, as he cited the Government’s ‘intention to offer only a 1 per cent pay rise’ to NHS workers – a move which has prompted strong criticism.

The survey, which has been conducted every year since 2003, was sent out to more than 1.2 million NHS staff in England between September and December last year.

Some 280 NHS organisations took part, including all 220 trusts in England, but it does not cover primary care staff.

Royal College of Nursing chief executive Dame Donna Kinnair said the NHS staff survey results should ‘act as a stark reminder to ministers of why a one per cent pay rise is so disrespectful after the last year’.

She said: ‘As the NHS tries to recover from the pandemic, nursing staff are still being pushed to the edge to keep services running. Rest and recuperation for health care staff must be central to decision-making. Support for staff must also include psychological and physical support for all that need it.

‘Unless ministers recognise the warning signals of those who are thinking of leaving and the nearly half of those surveyed who felt unwell as a result of work-related stress, it makes it even harder for the NHS to return to normal.

‘With tens of thousands of nursing vacancies across the NHS, much more needs to be done and this has to start with keeping and looking after those already in the profession.’

It comes after the PM yesterday hinted at a shift on NHS pay as he suggested nurses could be treated ‘exceptionally’.

Mr Johnson wriggled as he was berated by Labour’s Keir Starmer during a tetchy PMQs session, with the Labour leader comparing the proposed 1 per cent for health staff to the 40 per cent hike for ex-aide Dominic Cummings.

Sir Keir demanded that MPs be given a vote on the ‘real-terms cut’.

Unions have threatened strikes over the ‘insulting’ increase while Tories are restive.

Ministers have so far argued the bump is all the country can afford with coronavirus sending national debt soaring towards £2.8trillion, and pointed out that the rest of the public sector is facing a freeze.

But the premier fuelled speculation of a shift by stressing that the pay review body will consider the evidence.