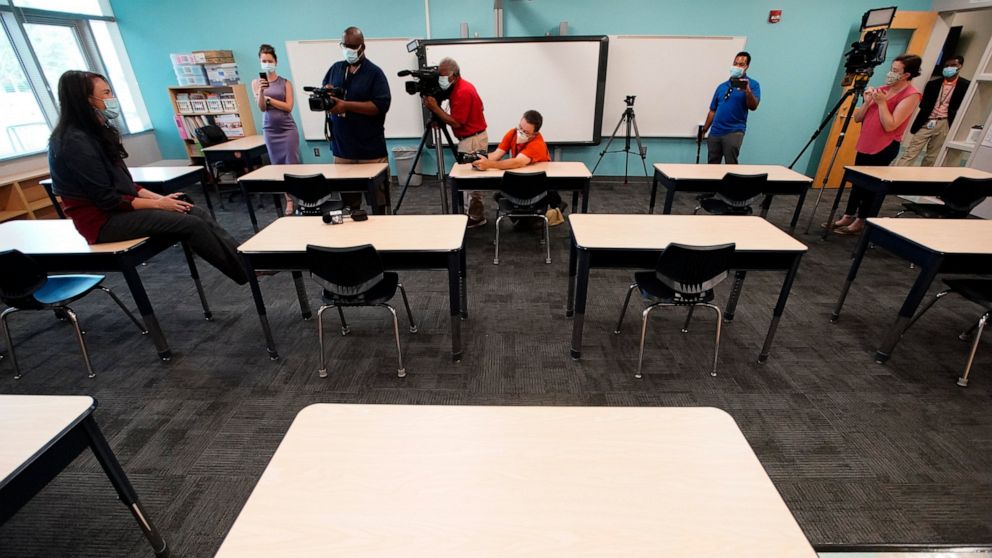 COLUMBIA, S.C. — Some South Carolina teachers took a personal day Wednesday to fight for safer classrooms amid the pandemic as well as an annual small raise that was frozen after the economy crashed because of the virus.

Unlike May 2019, when SC for Ed brought 10,000 people to the Statehouse for a rally in support of educators that garnered national attention, teachers on Wednesday stayed home and called and emailed legislators.

“We didn’t want to put them at any more risk,” said Lisa Ellis, who founded the group on social media less than two years ago.

Unhappy teachers are again moving to the front of South Carolina politics. After that huge rally 16 months ago, the governor and many lawmakers supported a $ 3,000 across-the-board raise for teachers in December.

But then COVID-19 arrived, the money for the raises disappeared and now teachers have gone from unappreciated to in fear of their own lives and their families’ lives as Republican Gov. Henry McMaster and others push for in-person teaching five days a week.

Local COVID-19 case counts and positive testing levels are higher than the rates discussed for safe schools at the start of the summer.

But the governor said parents need schools to watch their kids to get back to work, comments echoed by parents who also said online learning is not as effective as in-person teaching.

Ellis said teachers want to get back into the classroom too, but only when it is safe. SC for Ed surveyed teacher s as the school year started and found that the only protective equipment nearly all of them received were masks.

More than two-thirds of them disapprove or strongly disapprove with how South Carolina is handling reopening schools and 27% are considering leaving their jobs.

According to data kept by The Associated Press, there were about 293 new cases per 100,000 people in South Carolina over the past two weeks, which ranks ninth in the country for new cases per capita.

And just as the school year started, a teacher, a coach and a bus monitor died from COVID-19. None of them were with students, but the deaths hit educators across the state hard.

“I think there is this narrative out there that does not respect teachers,” Ellis said. “And there is a lot of misinformation on the risks.”

Instead of another big rally, SC for Ed decided to hold a virtual advocacy day Wednesday. There were rally videos on Facebook and teachers reached out by phone and online to lawmakers, especially those who the group feels aren’t in touch with the needs of teachers.

There was no immediate estimate on how many teachers took the day off. The May rally led a number of school districts to close because so many teachers were absent. No districts were closed on Wednesday.

Ellis said teachers also felt insulted by the House decision to not even debate this week an addition to the 2020-21 state budget passed by the Senate that would unfreeze what are called step raises — an extra boost of several hundred dollars given yearly to most teachers as they gain experience.

Read More:  ‘My family drive me bonkers when I go home for Christmas – by Boxing Day I have turned into a sulky teenager’

The Senate said that was a small token of respect for teachers and the $ 40 million was only a small part of the extra more than $ 700 million the state has set aside to weather the COVID-19 economic downturn if it is worse than forecasted.

Senators set aside most of the money after approving the raises and other small spending items like $ 9 million for school nurses and $ 20 million for hazard pay bonus of $ 1,000 for state employees making less than $ 50,000 a year. The employees getting the extra money had to keep working while at risk to get COVID-19, such as state troopers, prison guards and health care workers who took samples for virus tests.

House leaders said there was still too much uncertainty and promised to look at the raises when the next General Assembly meets in January.

COVID-19 did help SC for Ed with a big legislative victory. The separate massive education overhaul bills passed in the House and Senate are both dead, in part because the time needed in theory to work out the differences between the bill wasn’t there after the virus derailed the session in late March.