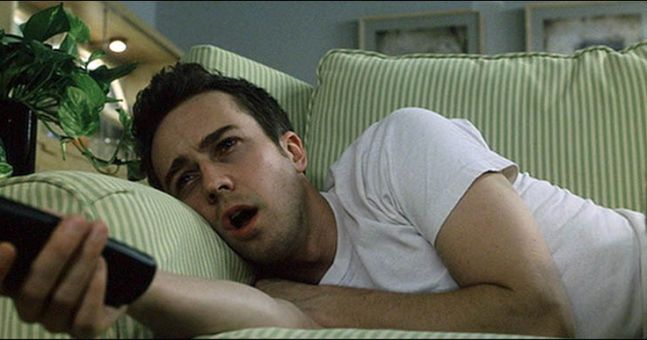 With over half of humanity now living in lockdown, staying home has become the new normal and millions of people across the globe are attempting to use the time to ‘better themselves’.

Whether they’re making music, art, learning a new skill, discovering the joys of cooking or getting the abs they always wanted – it seems that human beings around the world are trying to put a positive spin on their quarantine.

Social media is flooded with videos of PE classes at home (we really like you Joe Wicks, but stop making us look bad), virtual museum tours (let’s face it, plenty of museums are boring enough in real life), cooking exploits (nope) and people learning to play a new instrument (because everyone really wants to spend months of lockdown listening to their other half playing Wonderwall on a 50 quid guitar a dozen times a day).

Of course, it’s great to keep active and sane in these tough times and we commend everyone who is. But what if you’re just… not arsed?

It seems like the pitfalls of social media are just as bad during a pandemic as they are in normal times – if not more so. I mean, who actually needs to open Instagram to see beautiful influencers telling you how to do yoga at home while you sit there with soggy digestive biscuit crumb trails down the front of your pyjamas?

So, switch off social media, or at least mute the smugposting and realise it’s OK not to do any of the following while the world is in the throes of an actual f**king pandemic.

Read More:  As More States Clamp Down, 1 in 4 Americans Now Under 'Shelter in Place' Orders Due to Coronavirus

Well, the likelihood of you visiting a foreign country in the next five years is pretty damn slim. Sorry to break it to you. Not only due to widespread virus fears and border closures, but with the collapse of the global economy, airlines will go bankrupt, costs of flights will go up and to be honest, you’re probably going to be broke for a year or two as the world enters the greatest recession since the 1930s. Yay.

So it’s perfectly fine not to spend this time learning how to speak Japanese and use it instead to chill the hell out.

Get that summer body!

You don’t have to do 100 push ups, 200 squats and 50 burpees a day. You don’t have to wake up and run your 5km a day by trying to figure out a 5km route within the 2km radius of your house while trying not to come within 2metres of any other human.

You don’t have to take up yoga, pilates, weightlifting, spinning, cross fit (we’re still not entirely sure what that is) or any other fitness endeavour.

You can do those things if you want. But you can also get up, make coffee, stare at a wall while contemplating your existence for a few hours, eat a fig roll or nine, then turn on Netflix for 16 hours and repeat said ritual every day for as long as you like.

While we do promote reading, you don’t have to spend your time in lockdown reading books that people tell you you should ‘read before you die’.

Read whatever the hell you like. Read chick-lit without guilt. Read thrillers to your heart’s content. Read the back of a cereal box if it makes you happy.

Take up a new craft

Look, there’s nothing wring with crafting. But if you’d rather watch TV than spend the next few weeks stabbing yourself with needles/burning yourself with hot glue/inhaling paint fumes that’s perfectly ok.

And let’s face it, you’ll never want to be reminded of these few weeks/months once this comes to an end anyway so those beautiful artworks or new furniture in your home will just taunt you for years to come.

By all means, improve your home if you like. It’s the perfect time to do a spring clean. It’s a great time to reorganise your wardrobe. It’s the ideal time to throw out things you don’t want.

It’s not the perfect time to end up in A&E because you’ve decided to build your own Victorian-style wardrobe you found the plans for on Pinterest and have yourself an ‘incident’ with an electric saw.

Take up a musical instrument

Chances are you’ve always wanted to play something but never had time. But since we were put in lockdown before you could invest in a grand piano or a clarinet, the likelihood is all you have lying around the gaff is an old Casio keyboard or a nylon string guitar with the G string missing.

Nobody needs to be subjected to anyone playing the theme tune from Beverly Hills Cop ad infinitum because that’s the only sound effect working on the keyboard from 1989.

It’s fine to just listen to music instead.

Put down the spatula. That YouTube tutorial on how to make Toblerone cheesecake brownies may look simple. It’s not. It will take you multiple attempts to succeed and even then, it will look nothing like in the video. You will cry.

Take our advice and eat the Toblerone while watching movies instead.

All joking aside, we’re not trying to discourage anyone from doing something positive while trapped at home. In fact, we commend it. But it’s OK to be scared, upset, tired, lethargic, lazy and unmotivated right now. After all, these are unprecedented circumstances and we all cope differently.