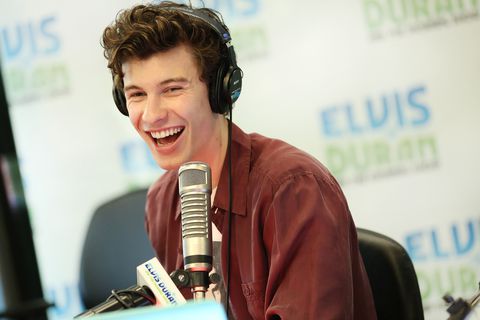 We’re used to seeing pop stars fight it out in the charts, but all signs are pointing to a clash of the physical variety between Canadian singers Shawn Mendes and Justin Bieber. During an interview on The Elvis Duran Show ahead of his Saturday Night Live performance tonight, Mendes joked that he might not have what it takes to win in a fight with Bieber.

“I’m bigger and I weigh more, but I think he has another type of level that he can click into that I don’t have,” he said. “I don’t possess the switch that he does.”

The question of who would emerge victorious came from an on-going troll war between the two artists. It all started when Mendes posted an image from the cover of The Observer Magazine, where his picture was accompanied by the headline ‘Prince of Pop’. “I’m not gonna lie, when I got the photo from that paper I was like ‘should I post this, I don’t want people to think I’m saying I’m the prince of pop, it’s just what the headline said,” he told Duran. “I thought it would be no big deal. The second I posted it, I was like ‘I shouldn’t have done that.'”

Bieber immediately responded to the image, commenting: “Gonna have to break a few more records to dethrone my title there bud (canadian voice)..but if you want we can play hockey for it but i heard your a real bender on the ice we could just drop the buckets and tilt for it.” Mendes replied: “LOL any time any day you just let me know!!!!!!”

For now, the pair’s sparring is limited to social media, with Mendes saying: “He’s so funny, and I honestly pretty much live to read the comments that he posts on photos, they’re hilarious. He’s so real life about everything, it’s great.”

It looks like we might have to wait a little while longer for a proper Prince of Pop punch-up; 20 year old Mendes is a huge admirer of Bieber, and cites him as an inspiration. “He is one of the main reasons I started doing what I do,” he said. “Probably not just me, but many other pop artists.”