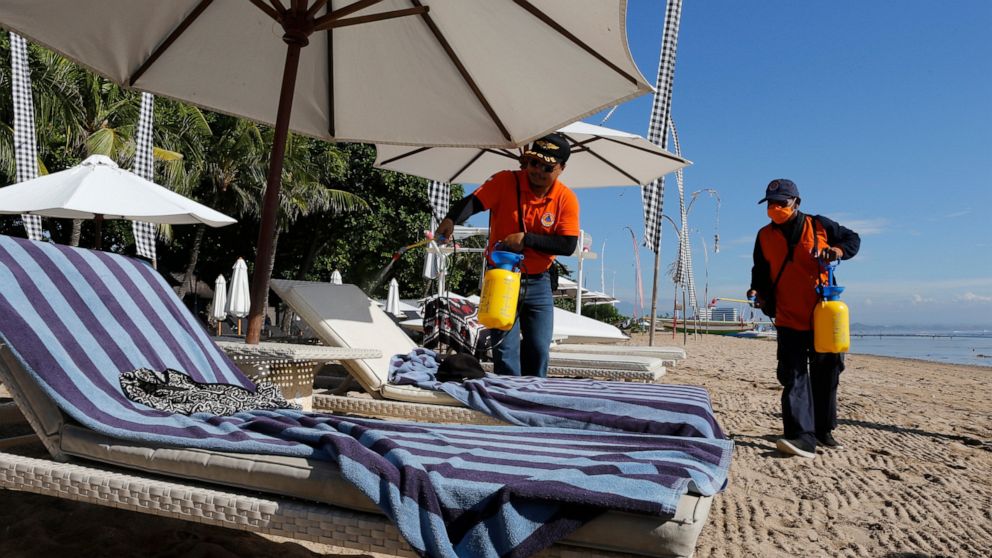 The Latest on the world’s coronavirus pandemic, which has infected more than 150,000 people and killed more than 5,700. The disease for most people causes only mild or moderate symptoms. For some, it can cause more severe illness.

Chancellor Sebastian Kurz told the Austria Press Agency Sunday that there should be only three reasons for people to leave home: essential work, essential purchases such as food, and helping other people.

He said that people will be able to go out “only alone or with the people with whom (they) live in their apartment.

Kurz’s comments came shortly after the governor of Tyrol province had announced a lockdown for his Alpine region.

Austria, a country of some 8 million people, has confirmed 800 infections with the new coronavirus.

More and more countries are taking border measures to try to prevent the spread of the new coronavirus.

Norway is set to close its airports and harbors due as of Monday, Prime Erna Solberg told Norwegian media. By midday Sunday, Norway has confirmed 1,133 cases of the virus.

Uzbekistan announced that international air and highway connections will be cut beginning Monday and all mass events, including observations of the holiday of Nowruz, are canceled.

Kazakhstan has declared a state of emergency that closes the borders to all forms of transport and closes shopping malls, theaters and other places of mass gatherings.

Austria’s Tyrol province is ordering a lockdown to fight the coronavirus, initially for a one-week period.

The provincial governor, Guenther Platter, announced Sunday that people will be allowed to leave their homes only for reasons such as buying food and medicine, visiting the doctor, getting cash or walking the dog.

Tyrol, an Alpine region that is popular with skiers, borders northern Italy and is one of the worst-hit areas of Austria, which already has largely shut down public life.

The lockdown measures mirror those already taken by Italy and Spain.

Austria has confirmed 758 cases of the new coronavirus and one death.

People in predominantly Catholic Poland, especially the elderly, have been advised to follow Sunday Mass on TV or on the radio and avoid being in crowds amid the coronavirus outbreak.

Churches remain open, but no more than 50 people can attend an indoors Mass at a time, to prevent the spread of the virus.

State and private TV stations and news portals were streaming live services early Sunday from some Warsaw churches. The seminary church could be seen empty during the service.

Read More:  Can exercise cause hearing loss or tinnitus?

Poland has 111 confirmed coronavirus infections. Three patients have died and thirteen have recovered.

Singapore has announced that all travelers arriving from Southeast Asian countries, Japan, Switzerland and the United Kingdom or with a travel history to these countries within 14 days upon arrival will have to self-isolate under new efforts to battle the coronavirus.

The health ministry said the measure, starting Sunday, will also apply to Singapore residents. Southeast Asian visitors will also be required to submit information on their health for approval before their travel, it said.

The city-state, which has recorded 212 virus cases, has already banned visitors from China, Iran, Italy, France, Germany, South Korea and Spain. National Development Minister Lawrence Wong however, said the new measure will not apply to sea and land crossings with Malaysia due to high inter-dependency between the neighbors.

Sri Lanka has closed all of its national parks, zoos and botanical gardens as a part of measures to combat the spreading of the coronavirus.

Sri Lanka has confirmed 11 cases of the coronavirus.

The Republic of Congo, which is home to the World Health Organization’s regional Africa headquarters, has reported its first case of the coronavirus.

The government said late Saturday that a duel French and Republic of Congo citizen returned from Paris on an Ethiopian Airlines flight on March 1. After recently showing symptoms, they alerted authorities. The government asked that others on that flight come forward.

The new case means 25 of Africa’s 54 countries now have cases of the virus.

Turkey has set up quarantine locations for more than 10,300 people returning from pilgrimages to Islam’s holy sites in Saudi Arabia.

The Youth and Sport Ministry said Sunday that beds had been made available in university dormitories in the capital, Ankara, and the central Anatolian city of Konya for those returning from Umrah, a pilgrimage that can be made at any time of the year. Returnees will be quarantined for 14 days in an effort to combat the coronavirus.

Universities have been closed for three weeks due to the virus outbreak. Turkey’s latest case, its sixth, was a returning pilgrim.

Indonesian President Joko Widodo has asked people to work, study and worship from home to reduce the risk of being infected with the coronavirus.

Indonesia, the world’s most populous Muslim nation, has confirmed 117 cases, with five deaths.

Read More:  Coronavirus: Latest patient was first to be infected in UK

Widodo said at a news conference Sunday that his country faces an especially challenging fight against the coronavirus due to its unique geography. The sprawling archipelago nation comprises over 17,000 islands and is home to more than 260 million people.

Austria is further tightening restrictions on public life, closing restaurants and sports facilities and halting flights to a number of countries in an effort to fight the coronavirus.

Chancellor Sebastian Kurz announced the new measures in a parliamentary session on Sunday. The Austria Press Agency reported that he announced flight bans for Britain, Ukraine and Russia.

Restaurants will now have to close entirely starting on Tuesday. Previous plans had called for them to open only until 3 p.m.

Austria has confirmed 758 cases of the new coronavirus, including one death.

Travelers returning to the U.S. from Europe have been greeted with hourslong waits for required medical screenings at airports.

While American citizens, green card holders and some others are allowed to return to the U.S. amid new European travel restrictions, they’re being funneled to 13 U.S. airports where they’re subject to health screenings and quarantine orders.

Acting Secretary Chad Wolf says the U.S. Department of Homeland Security is trying to add additional screening capacity and work with airlines to expedite the process. In tweets posted early Sunday morning, he said it takes about a minute per screening.

Videos and photos posted to social media showed packed, winding lines of returning travelers. On Twitter, airports like Dallas/Fort Worth and Chicago O’Hare acknowledged the delays and asked for patience.

South Korea’s president has declared southeastern parts of the country hit hard by the coronavirus outbreak as “special disasters zones,” a designation that makes residents there eligible for emergency relief, tax benefits and other state financial support.

President Moon Jae-in’s office says he on Sunday approved a proposal by his prime minister to declare the Daegu city and some areas in the southeastern Gyeongsang province as such disaster zones.

It’s the first time for South Korea to declare any area a special disaster zone due to an infectious disease. Past disaster zone designations were declared for areas stricken by typhoons, floods and other national disasters.

South Korea has so far reported 8,162 coronavirus cases, about 88% of them in the southeastern region. More than 830 people have recovered.

Australia’s prime minister says all travelers arriving in the country will have to self-isolate for 14 days to try and stem the spread of the new coronavirus.

Read More:  How Important are Chapter Headings in a Novel?

Prime Minister Scott Morrison made the announcement Sunday after a phone hookup with the leaders of Australian states and territories leaders under a new national cabinet meeting.

Morrison told reporters in Sydney that the measures are indefinite and will be reviewed periodically.

Morrison also banned all cruise ships from docking in Australian ports for at least 30 days.

The measures are similar to what New Zealand announced on Saturday.

Just across the Hudson River from New York City, a New Jersey city is imposing a curfew on residents amid the virus outbreak.

Hoboken residents must stay in their homes from 10 p.m. to 5 a.m. beginning Monday, a daily curfew that’s among the first and most far-reaching such measures taken in the U.S.

Mayor Ravi S. Bhalla announced Saturday night that exceptions will be made for emergencies and people required to work.

He also said bars and restaurants can only offer takeout and delivery services. Bars that don’t serve food will shut down altogether Sunday.

In New Zealand, passengers aboard a cruise ship in the South Island tourist town of Akaroa are not being allowed off the vessel while three passengers are tested for the new coronavirus.

Director-General of Health Ashley Bloomfield said Sunday that one of the passengers on the Golden Princess is being treated as a suspected case because that person has developed symptoms of the disease and is a close contact of another person who has been confirmed as having contracted COVID-19.

Bloomfield says they should get the test results on Monday, and that officials are considering their response should the case be confirmed.

He says one lesson from observing problems with the virus spreading on other cruise ships is to avoid leaving everybody on board. Bloomfield didn’t elaborate on what form any response might take.

The news came just one day after New Zealand Prime Minister Jacinda Ardern announced the country was banning cruise ships from entering its waters as it took a more aggressive approach to COVID-19. The Golden Princess was already in New Zealand at the time Ardern made her announcement.

The cruise ship departed from Melbourne, Australia. An Akaroa cruise schedule indicates the ship was expected to have about 2,600 passengers and 1,100 crew.

The Associated Press receives support for health and science coverage from the Howard Hughes Medical Institute’s Department of Science Education. The AP is solely responsible for all content.