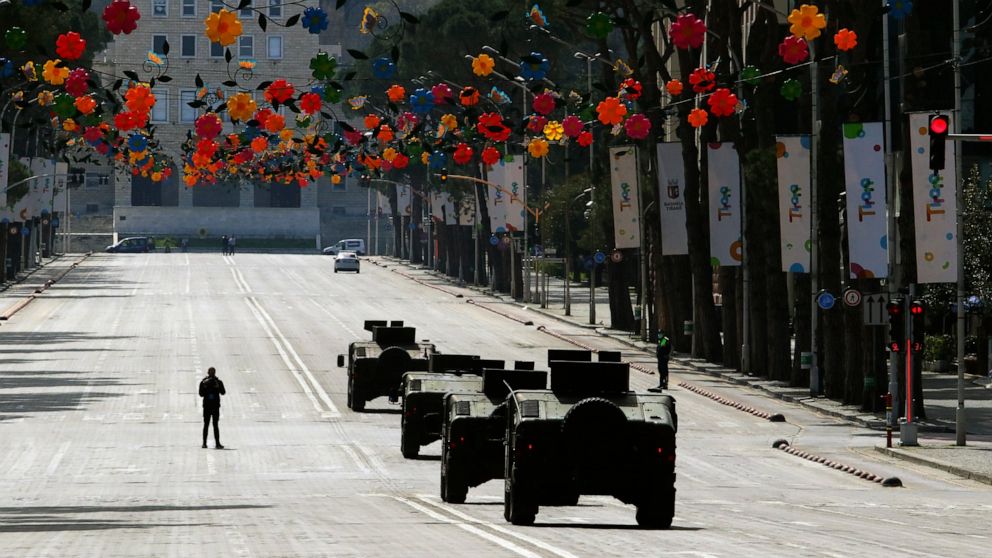 The Latest on the coronavirus pandemic. The new coronavirus causes mild or moderate symptoms for most people. For some, especially older adults and people with existing health problems, it can cause more severe illness or death.

TOP OF THE HOUR:

WASHINGTON — The Pentagon says it’s made no decisions yet about calling up reservists following President Donald Trump’s order authorizing the call-up of an unspecified number to help with the coronavirus response.

Spokesman Jonathan Hoffman says before calling up any members of the National Guard, the department would consult with state officials. Hoffman says its “a dynamic situation” and the Pentagon currently doesn’t have “a projected number of expected activations.”

Trump said in a letter to Congress on Friday that he had authorized Defense Secretary Mark Esper to order units and individual members of the Selected Reserve, as well as certain Individual Ready Reserve members, to active duty.

The reserve call-up likely will assist the military as it deploys field hospitals to cities hard hit by COVID-19 and provide medical support to state and local authorities.

LONDON— The editor of the respected British medical journal, The Lancet, has accused the government of doing too little, too late, to address the COVID-19 crisis.

He says the NHS has freed up 33,000 beds for virus patients — a third of all hospital capacity — and enabled 18,000 nurses and doctors to return to practice. Three new makeshift hospitals are being built.

WASHINGTON — The civil rights office at the U.S. Department of Health and Human Services is issuing a reminder that discrimination during COVID-19 care is prohibited.

Civil Rights office director Roger Severino says Health Human Services is committed to leaving no one behind during the crisis. Discrimination on the basis of race, color, national origin, disability, age, sex and religion is prohibited.

TIRANA, Albania — Albania will send doctors and nurses to nearby Italy, lending a hand to the country at the epicenter of the COVID-19 in Europe.

The government decision published at the Official Gazette on Saturday sets aside a budget reserve for doctors and nurses, who will be paid per month.

The Dita newspaper says 30 doctors and nurses will serve in Bergamo, Italy, which is hard hit by the virus.

Albania has reported 197 cases of the coronavirus, with 10 deaths.

TOKYO — Japanese Prime Minister Shinzo Abe says the country is at a critical stage in dealing with coronavirus infections but not at a point to declare a state of emergency.

Abe says Japan has managed to keep clusters under control by carefully following infection routes. But the initial strategy is now having a difficulty, with a rise of infections that are no longer traceable — an early sign of infection explosion.

He says once there is infection overshoot, “our strategy of slowing down the peak of the infections will instantly fall apart.” He adds “under the current situation, we are just barely holding up. But I understand we are standing on the edge.”

Abe convened a taskforce Thursday, the day after Tokyo Gov. Yuriko Koike made a stay-at-home request to its 14 million residents after seeing a spike in the number of new cases of the COVID-19 to 41.

Japan has 2,180 confirmed cases, including 712 from a cruise ship, with 59 deaths, according to the health ministry.

PARIS — French police are uncovering an underground business in protective face masks, locating more than 23,000 masks stuffed in a small truck in a chic neighbourhood of western Paris.

Stocks of masks have turned up in other surprising places. The masks, in short supply in France and other countries, are needed by health workers amid the coronavirus pandemic. The French government requisitioned all masks in early March.

Police found 20,000 illegally held masks in a tourist agency in southern Paris and 15,000 masks in a natural foods shop in an eastern neighborhood of the French capital, the newspaper Le Monde reported on Saturday.

KATHMANDU, Nepal — German and French government-chartered flights picked up hundreds of passengers stranded in the Himalayan nation since the country imposed a complete lockdown.

Nepal’s government has halted all flights and ground transportation, shutting down offices and shuttering businesses to control the spread of the coronavirus.

Nepal has five confirmed cases, including one person who has recovered. Nepal’s health ministry spokesman Bikash Devkota says the latest case confirmed is a Nepali woman who had traveled back from Belgium.

A German air force plane landed in Bergamo in northern Italy early Saturday. It was due to return to Cologne after taking the Italian patients, who will be treated at various hospitals in the region.

Several German state governments have offered to take in patients from Italy. Some have already arrived. Germany also has taken in some patients from hard-hit eastern France.

Germany has a large number of coronavirus cases but a relatively low death rate compared with Italy’s. Its health system hasn’t been overwhelmed by severe cases so far.

MADRID — Spain has seen its deadliest day yet during the coronavirus crisis with 832 deaths reported on Saturday for a total of 5,690 fatalities. Infections have increased by over 8,000 in 24 hours to reach a national total of 72,248.

Spain is approaching two weeks of its stay-at-home restrictions and store closings but its infections and deaths keep rising. On Friday, Spain reported a total of 64,059 cases and 4,858 deaths.

The medical system is being pushed to the limits in the hot spots in Madrid and northeast Catalonia with doctors, nurses and ambulance drivers falling ill at an alarming rate and working non-stop.

Pablo Rojo, an ambulance medic at Barcelona’s Dos de Maig hospital, says the average age is decreasing. He says: “They’re not 80 years old anymore, they are now 30 and 40 years old.”

HELSINKI — Finnish police and assisting military forces and border guard officials have started to enforce a blockade of a key southern region that includes the Nordic nation’s capital, Helsinki.

The exceptional order by Prime Minister Sanna Marin’s government to block the movement of citizens into and out of the Uusimaa entered into force on Saturday.

The region is home to some 1.7 million people including Helsinki’s 650,000 residents.

Police have set up road blocks to main entry and exit points in Uusimaa and are checking each arriving or departing vehicle for a legitimate reason for movement. Finnish conscript soldiers are patrolling on local trains for possible regulation dodgers.

TIRANA, Albania — The Albanian government has announced that people will have to apply for a permit to go out for necessities following stricter measures to contain the virus outbreak.

Prime Minister Edi Rama says people can apply online via e-albania.al or with a text message. Only one person per family may go out.

The only shops open are those selling food, medicine and other basic items and people may only go out between 5 a.m. and 1 p.m. from Monday to Saturday.

No movement or business activity will be allowed from Saturday at 1 p.m. to Monday at 5 a.m., with police and military forces patrolling the streets.

Albania has reported 186 cases of the new coronavirus with 10 deaths.

KATHMANDU, Nepal — Scores of tourists on the foothills of Mount Everest have been flown to safety days after being stranded on the only airstrip serving the world’s highest mountain.

Dhurba Shrestha, an official at the Tenzing Hillary Airport in Lukla, says that 174 foreign tourists and four Nepali nationals left the mountain by air on Saturday in 12 small planes and two helicopters.

The airport at Lukla, located at an altitude of 2,800 meters (9,184 feet), is the only airport in the Mount Everest region.

Foreign embassies and local travel agents have been urging Nepal’s government to allow these rescue flights to the Everest region since the country imposed a lockdown last week.

Nepal’s government has halted all flights and ground transportation, shutting down offices and shuttering businesses to control the spread of the coronavirus. Nepal has four confirmed cases including one person who has recovered.

ISLAMABAD — The foreign ministry says China is sending a plane containing medical personnel and supplies to aid Pakistan in the fight to contain the spread of COVID-19.

China is also a key military supplier for Pakistan, having supplied the country with missiles capable of carrying nuclear weapons.

Pakistan currently has 1,321 confirmed cases, 10 deaths and 23 patients who have recovered. Most of the infected people returned from Iran where the confirmed cases are more than 30,000 with more than 2,300 deaths.

German authorities closed non-essential shops and banned gatherings of more than two people in public at the beginning of the week. Schools, bars, restaurants and clubs are also closed.

Merkel’s chief of staff, Helge Braun, told Saturday’s edition of the daily Tagesspiegel that “we are not going to talk about any easing before April 20 – until then, all measures will remain in place.” He said that officials will say “in a timely manner before then” what will happen after that date.

Braun said that “the older and the sick will have to reduce their contacts for significantly longer.”

Germany has recorded more than 50,000 cases of the new coronavirus, according to a tally by John Hopkins University, with 351 deaths – a lower death rate than in many other countries.

COLOMBO, Sri Lanka — Sri Lanka police say they have arrested thousands, including many who were praying in a mosque, for violating a countrywide curfew imposed as a part of stringent measures designed to contain the spread of coronavirus.

The number of positive cases has risen to 106 and the government has ordered police to strictly impose the curfew to ensure social distancing across the country.

On a tip that a group of people were praying in a mosque in the town of Horowpathana, about 124 miles (200 kilometers) north of Capital Colombo, police and health officials went to the mosque and arrested 18 while several dozens have fled.

The government has banned nonessential travel. Police have arrested 4,600 and seized 1,125 vehicles for violating curfew since March 20.

UNITED NATIONS — The United Nations says 86 staff members around the world have reported cases of COVID-19.

U.N. spokesman Stephane Dujarric said most of the infected staff members are in Europe, but there are also staffers in Africa, Asia, the Middle East and the United States that have the coronavirus.

To try to reduce transmission, he said the vast majority of U.N. staffers are working from home.

At U.N. headquarters in New York, where a normal day would see staffers’ passes swiped 11,000 times, the number of swipes Friday morning stood at 140, Dujarric said.

In Geneva, he said, the number of staff at the U.N. office has dropped from around 4,000 people on a regular day to just about 70 on Thursday. In Vienna, more than 97% of U.N. staff are now working remotely, he said. And, in Addis Ababa, Ethiopia, 99% of staff are working from home.