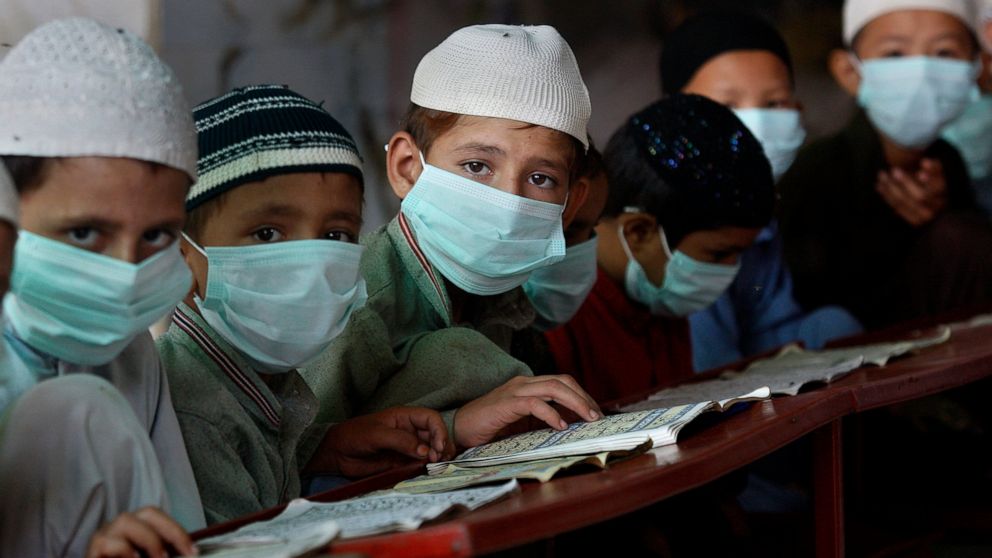 He says in many parts of the world, there is a “pharmacological marginalization” of those without access to health care.

Francis met Saturday with members of an Italian aid group that collects donated medicines from pharmaceutical companies and distributes them to clinics and centers helping the neediest.

Francis says far too many people die in parts of the world for lack of drugs widely available elsewhere, and political leaders must take their plight into account.

“I repeat, it would be sad if in distributing the vaccine, priority was given to the wealthiest, or if a vaccine becomes the property of this or that nation and not for everyone,” the pope said.

Francis has previously called for universal access to the vaccine.

HERE’S WHAT YOU NEED TO KNOW ABOUT THE VIRUS OUTBREAK

— Coronavirus spurs $ 7B push for technology in German schools

— Director of the University of Colorado’s football operations cited for violating coronavirus-related public health orders after a team practice involved 108 people on a mountain hike.

— Can mandatory masks offer enough protection in lecture halls so packed that late arrivals have to sit on the floor? That’s what worries many students at the centuries-old Sorbonne University in Paris with the coronavirus on the rebound across France.

— New nationwide lockdown restrictions in England appear to be on the cards soon as the British government targeted more areas to suppress sharp spike in new coronavirus infections.

HERE’S WHAT ELSE IS HAPPENING:

NEW YORK — New York City’s mayor says he is confident the city will meet a revised timeline to bring public school students back to classrooms within the next two weeks.

De Blasio recently delayed the reopening plan for the nation’s largest school district for the second time since it was announced in July, citing a shortage of staff and supplies.

Unions representing the city’s teachers said it wouldn’t have been safe to open all the school sites next week.

The unions had pressed for more staff and additional protective equipment to protect against the virus. De Blasio promised to hire 2,500 more teachers in addition to the 2,000 additional teachers he had previously announced.

BOULDER, Colo. – The director of the University of Colorado’s football operations was cited for violating coronavirus-related public health orders after a team practice involved 108 people on a mountain hike.

Bryan McGinnis could face a maximum $ 1,000 fine, city spokeswoman Sarah Huntley says. Many were not wearing masks or social distancing.

The group also violated a city requirement that groups of 25 or more people get a permit to use open space and mountain park land owned by the city, Huntley says. Public health orders limit groups to 10 people to stem the spread of the coronavirus.

CU Athletic Director Rick George says all student-athletes are frequently tested for coronavirus and all players who took part in the hike had recently tested negative. The school has reported at least 670 coronavirus cases since classes began about a month ago.

NEW YORK — Two more college football games on Saturday have been postponed because of the coronavirus.

Baylor’s season opener against Houston and Florida Atlantic’s opener against Georgia Southern have been affected by positive tests. Baylor says its unable to meet the Big 12 roster threshold of a minimum of 53 players available to play.

There’s now been 16 Bowl Subdivision games postponed or canceled because of virus issues since Aug. 26.

The pandemic has impacted college basketball, with the start date delayed until Nov. 25. The marquee basketball tournament on Maui has been moved to North Carolina. Meanwhile, the Pac-12 is considering getting back into fall football.

BERLIN — German Chancellor Angela Merkel says the coronavirus pandemic has highlighted the need for massive upgrades of school technology around the country.

Merkel said Saturday during her weekly video podcast that teachers were left scrambling to teach courses virtually when schools closed at the start of the country’s outbreak. She says that underscored how important digital media and other tools are but also exposed widespread infrastructure failings.

The German leader said: “That is why we have to push ahead with the digitization of schools at full speed. We need this as an indispensable addition to face-to-face teaching.”

Merkel says the government is committing 6 billion euros ($ 7.1 billion) to support the development of digital learning and infrastructure in schools. She says all schools need high-speed internet access as soon as possible and teachers need computers suitable for providing digital lessons.

Germany’s schools have reopened and students have returned to in-class learning, but officials have cautioned that the country needs to be better prepared in case virus case numbers spike again.

NEW DELHI —India has maintained its surge in coronavirus cases, adding 93,337 new confirmed infections in the past 24 hours.

The Health Ministry on Saturday raised the nation’s caseload to more than 5.3 million out of the nearly 1.4 billion people. It said 1,247 more people died in the past 24 hours for a total of 85,619. The country has over a million active cases with about 80% recovery rate.

India has been reporting the highest single-day rise in the world every day for more than five weeks. It’s expected to become the pandemic’s worst-hit country within weeks, surpassing the United States.

Prime Minister Narendra Modi’s government has faced scathing criticism from opposition lawmakers in India’s Parliament for its handling of the pandemic amid a contracting economy leaving millions jobless.

More than 10 million migrant workers, out of money and fearing starvation, poured out of cities and headed back to villages when Modi ordered the nationwide lockdown on March 24. The migration was one key reason that the virus spread to the far reaches of the country while the lockdown caused severe economic pain. The economy contracted nearly 24% in the second quarter, the worst among the world’s top economies.

DENVER — The University of Colorado has forced some students to move out of their dorms to create more isolation housing for students with coronavirus infections as case numbers continue to increase at the Boulder campus.

The Denver Post reported that the university said in an email to affected students that those living in the Darley North tower at the Williams Village complex must move to other residence halls within the complex by 5 p.m. Sunday.

The announcement came as the university reported 130 newly confirmed coronavirus cases, bringing the total to 671 cases since classes began about a month ago.

Officials say two-thirds of on-campus isolation space at the university is already full, with 151 beds in use out of 267 available as of Thursday.

SACRAMENTO, Calif. — California’s unemployment rate fell to 11.4% in August amid its slow recovery from the pandemic’s damage to the economy.

The Employment Development Department says the state added 101,900 jobs during the month. Most were government jobs, including temporary positions for the U.S. Census.

California lost more than 2.6 million jobs in March and April because of the coronavirus pandemic. The state has regained nearly a third of those jobs. But experts warn that other indicators show the state’s economy has stalled with no quick recovery in sight.

Restaurants and other hospitality businesses have been the hardest hit. The sector lost 14,600 jobs just in August with coronavirus restrictions still in place across much of the state.

BOISE, Idaho — Idaho will remain under current restrictions of the final stage of Gov. Brad Little’s economic reopening plan for at least another two weeks due to the coronavirus pandemic.

The governor said Friday that intensive care unit hospitalizations of those infected remain too high.

Little says Idaho residents have done well in their precautions, such as wearing face coverings, but virus infections have continued. John Hopkins University says that through Thursday, Idaho had more than 36,000 confirmed coronavirus cases, with 434 deaths.

Most Idaho businesses are open in the state’s stage 4 restrictions. The governor says the unemployment rate is now at 4.2%, after reaching nearly 12% during spring when the virus entered Idaho and businesses started shutting down.

A state education spokesperson says the decision on McKelvie Intermediate was made by school officials in Bedford. According to a school board meeting this week, the schools had been chosen for visits because of how they notified families about earlier cases of the virus.

The U.S. Department of Education did not immediately respond to an email seeking comment.

ROME — Public health authorities in Italy are warning that the average age of coronavirus patients is creeping up as young people infect their more fragile parents and grandparents, risking new strain on the hospital system.

The Superior Institute of Health issued its weekly monitoring report Friday as the country where COVID-19 hit first in the West recorded the highest number of new infections — 1,907 — since May 1. Another 10 people died over the past day, bringing Italy’s official death toll to 35,668.

While Italy hasn’t seen the thousands of daily new infections other European countries have seen recently, its caseload has crept up steadily over the past seven weeks. Initially, most new infections were in young people who returned from vacation hotspots. The health institute said Friday that they are now infecting their older and more fragile loved ones in home settings, with the average age of positive cases last week at 41 versus the low 30s in August.

The institute warned that while the health system isn’t overwhelmed, it risks further strain if Italians don’t rigorously adhere to mask mandates and social distancing norms.