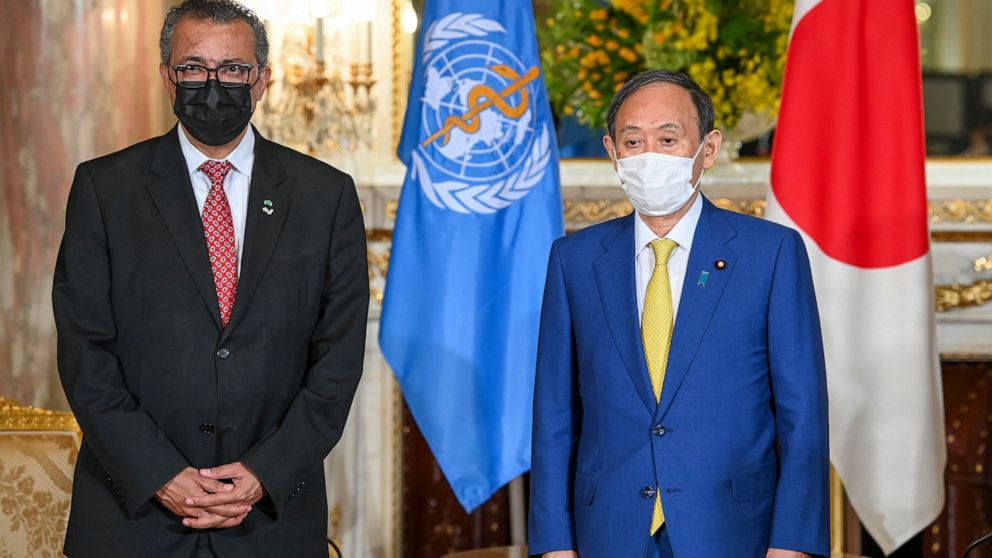 TOKYO — Tokyo has hit another six-month high in new coronavirus cases, one day before the Olympics.

Prime Minister Yoshihide Suga and the International Olympic Committee have been determined to hold the Olympics despite the pandemic. Suga placed Tokyo under a state of emergency on July 12, but daily cases have sharply risen.

Spectators are banned from all Olympic venues in the Tokyo area, with limited audiences allowed at a few outlying sites.

The emergency measures, which largely involve a ban on alcohol sales and shorter hours for restaurants and bars, are to last until Aug. 22, after the Olympics end on Aug. 8.

About 23% of Japanese are fully vaccinated, considerably short of the level believed necessary to have a meaningful effect on reducing the risk in the general population.

MORE ON THE PANDEMIC:

HERE’S WHAT ELSE IS HAPPENING:

CONAKRY, Guinea — The African country of Guinea has pulled out of the Olympics, citing the coronavirus.

The decision will keep five athletes from competing at the Tokyo Games. Minister of Sports Sanoussy Bantama Sow made the announcement in a letter Wednesday addressed to the president of the Guinean Olympic committee. He blamed the virus and its variants.

Guinean Olympic committee secretary general Ben Daouda Nassoko told The Associated Press only days before the statement that funds had just been released for the delegation to go to Tokyo. The five athletes impacted by the decision are a freestyle wrestler, swimmers, and a track and judo participant.

Guinea has participated in the Olympics 11 times but has never won a medal. North Korea is the only other country to have pulled out of the Tokyo Olympics, also citing concerns related to the coronavirus.

DELHI, India — India’s government has dismissed a recent study which estimated that the country’s excess deaths during the pandemic could be 10 times the official COVID-19 toll, calling it “misleading” and “fallacious.”

On Tuesday, new research by the Center for Global Development estimated excess deaths — the gap between those recorded and those that would have been expected — to be 3.4 million to 4.7 million since the pandemic began. It said an accurate figure may “prove elusive” but the true death toll “is likely to be an order of magnitude greater than the official count.”

On Thursday, the health ministry released a statement saying the methodology in the study was misleading and strongly cautioned against attributing all of the excess deaths to COVID-19.

Most experts believe India’s official toll of more than 418,000 dead is a vast undercount, but the government has continually dismissed these concerns as exaggerated. On Thursday, India registered over 41,000 new cases and more than 507 official deaths. After a devastating surge earlier this year, confirmed infections in India have been on the decline, but authorities have warned that another surge is likely to hit in the coming months.

Overall, India has the world’s second-highest caseload with more than 31 million confirmed infections.

NAIROBI, Kenya — African countries next week will begin receiving the first of 400 million doses of the Johnson & Johnson vaccine they are purchasing themselves, according to the African Union special envoy on vaccine acquisition.

Strive Masiyiwa told journalists that 6 million doses will begin to ship next week and 45 African countries should receive their first shipment by the end of August. Masiyiwa says all doses should be delivered by September 2022.

The 400 million doses represent the collective effort by African countries to pursue doses outside the global COVAX project aimed at delivering vaccines to low-and middle-income nations, The COVAX effort has fallen behind in deliveries because India has imposed export controls on vaccines.

Because of vaccine nationalism around the world, Masiyiwa says there is “no possibility” the African continent can meet its goal of vaccinating 60% of its population of 1.3 billion by the end of this year. Less than 2% of the vaccines administered globally have been in Africa, according to the World Health Organization, while the Africa CDC says 29 of the continent’s 54 countries are now experiencing a “severe third wave” of infections.

Separately, the United States says this week it has shipped 1 million Johnson & Johnson doses to Burkina Faso, Djibouti, Ethiopia, Gambia and Senegal, and another 1.2 million doses go this week to Cameroon, Lesotho, Niger, Zambia and Central African Republic. The deliveries are part of a U.S. donation of some 25 million doses to African nations.

BERLIN — Chancellor Angela Merkel says coronavirus infections in Germany are rising at worrying speed. She is appealing to citizens to get vaccinated and persuade others to do so.

Germany’s infection rate remains low compared to other European countries but has been rising steadily since it bottomed out at 4.9 new weekly cases per 100,000 residents on July 6. On Thursday, that rate stood at 12.2.

Slightly over 60% of the German population had received a first dose of vaccine by Thursday, while 48% were fully vaccinated. But the vaccination campaign has slowed in recent weeks.

Merkel told reporters Thursday that infections are rising with “worrying momentum” and that “we have exponential growth.”

Merkel said that “we all want our normality back” but “for this we need significantly more vaccine protection.” She said that every vaccination counts toward bringing life back to normal for everyone.

The new cases include 270 sailors who were recently flown home after a large-scale outbreak on their destroyer engaging in an anti-piracy mission off East Africa.

South Korea has seen a spike in infections in recent weeks amid a slow vaccination campaign, lax public vigilance and the spread of more contagious delta variant. The country’s daily caseload has been above over 1,000 for 16 consecutive days.

Health officials say they are discussing whether to extend the toughest distancing restrictions imposed on the densely populous Seoul metropolitan area.

NEW ORLEANS — New Orleans officials have issued an advisory “strongly recommending” that people resume wearing masks indoors amid a surge in coronavirus cases to levels not seen in months.

The city is hoping to avoid the kind of pandemic-related shutdowns that devastated its vital tourism economy in 2020, but Mayor LaToya Cantrell stopped short Wednesday of requiring mask wearing.

The mayor says the advisory “puts the responsibility on individuals themselves,” rather than have the city enforce a mandate.

The announcement came as New Orleans posted figures showing the seven-day average of new cases has risen 117, the highest since early February. It had fallen as low as eight in mid-June but began climbing sharply in early July.

The demonstration in front of the parliament building took place hours after the government submitted legislation to make COVID-19 vaccinations mandatory for employees at nursing homes and care facilities.

Under the draft bill, staff members could be suspended without pay starting in mid-August if they fail to comply.

Officers fired the tear gas and water cannons after protesters attempted to break through a police cordon.

SALT LAKE CITY — Utah recorded its highest number of people hospitalized due to COVID-19 in five months as the virus surges among unvaccinated people.

State health officials renewed their pleas for people to get vaccinated as Utah intensive care units reached 81.5% capacity. There are 295 people who are hospitalized due to the virus in the state, the highest since February.

Utah has averaged about 622 confirmed cases per day over the last week, about triple the case rate the state was experiencing at its lowest point in early June.

State health data shows the recent surge is almost entirely connected to unvaccinated people. About 66% of adults in Utah have had at least one dose of the vaccine and 60% are fully vaccinated.

MISSION, Kan. — Coronavirus cases have tripled in the U.S. over two weeks amid an onslaught of vaccine misinformation. The spike in infections is straining hospitals, frustrating doctors and pushing clergy into the fray.

Across the U.S., the seven-day rolling average for daily new cases in the U.S. rose over the past two weeks to more than 37,000 on Tuesday, up from less than 13,700 on July 6. That’s according to data from Johns Hopkins University.

Health officials blame the delta variant and flattening vaccination rates. The Centers for Disease Control and Prevention says 56.2% of Americans have gotten at least one dose of the vaccine.

Dr. James Williams is a clinical associate professor of emergency medicine at Texas Tech and says he has been treating more COVID-19 patients. He says patients are younger — many in their 20s, 30s and 40s — and overwhelmingly unvaccinated.

Williams says: “It is like seeing the car wreck before it happens.”