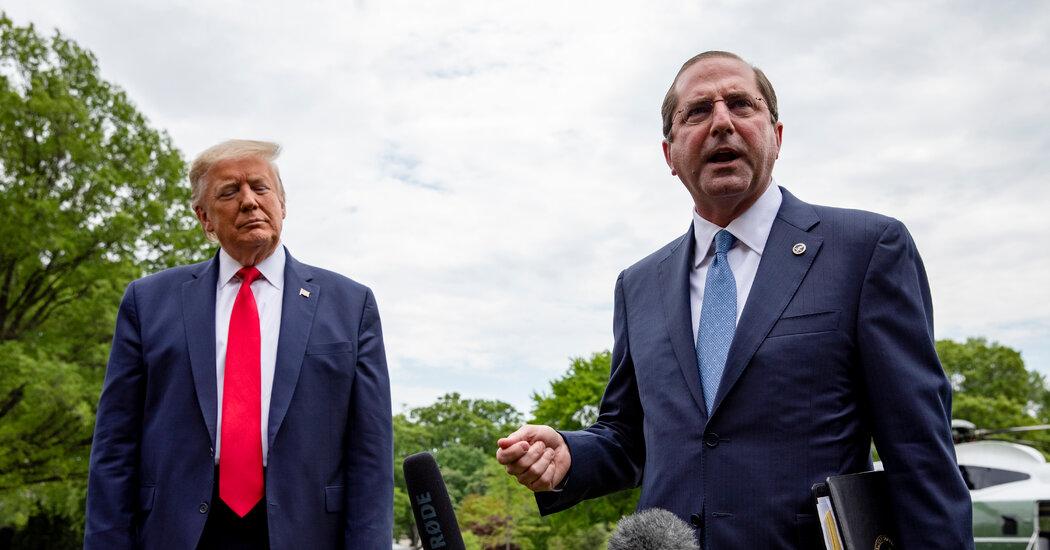 The Trump administration this week ordered the Food and Drug Administration to allow the use of a certain class of laboratory tests, including some for the coronavirus, without first confirming that they work.

For months some F.D.A. officials have worried that the pandemic would provide an opening for clinics, academic institutions and commercial labs to get what they had long been lobbying for: the leeway to develop their own laboratory tests for various diseases without F.D.A. oversight. On Wednesday that became a reality.

Some lawmakers are also troubled by the change, particularly during a public health emergency when the need for accurate coronavirus tests is high. The F.D.A. has required that it provide emergency authorizations for lab-developed tests during other outbreaks.

The announcement “is deeply concerning and suggests that the Trump Administration is once again interfering with F.D.A.’s regulation of medical products,” Representative Frank Pallone, Jr., of New Jersey, chairman of the House Energy and Commerce Committee, said in a statement.

“I do not believe that now is the time to reduce oversight of COVID-19 tests,” he said.

While most common laboratory tests are commercial tests, manufactured and marketed to multiple labs, other tests are developed and validated within one particular laboratory. These tests, called “laboratory-developed tests” or LDTs are used solely within that laboratory and generally are not distributed or sold to any other labs or health care facilities, although some work with mail-in samples.

The new policy states that lab-developed tests will no longer require F.D.A. authorization.

“This deregulatory action will better prepare us for future pandemics while maintaining regulatory safeguards for quality and accuracy,” said Brian Harrison, the chief of staff of the Department of Health and Human Services.

The administration faced widespread criticism for failing to make coronavirus tests available earlier in the outbreak, and for ongoing shortages and delays. But critics say that freeing all lab-developed tests from F.D.A. scrutiny — including those for cancer, Alzheimer’s disease, and genetic conditions — will pose new problems.

Read More:  Can’t lose belly fat? This trainer says your hormones could be to blame

“I think it’s quite alarming,” said Jeff Allen, president and chief executive of Friends of Cancer Research. He noted that a growing number of tests are in development to help determine whether cancer patients are responsive to certain drugs. “It’s really important for the performance of those tests to be assured.”

Mr. Allen and other critics also note that the new plan appears to leave the F.D.A. with no knowledge of what lab-developed tests are being devised, much less how they are performing.

“Suppose you get a Covid test and you actually have the infection and it comes back negative,” said Dr. Michael Carome, director of Public Citizen’s Health Research Group. “You may believe you’re OK and that may leave you in your home, exposing family and friends to the virus when you should quarantine.”

Earlier this year, the F.D.A. noted just that problem. In response to an inquiry, agency spokeswoman Emma Spaulding said in a statement in May that there were problems with some of the laboratory coronavirus tests whose developers had applied for emergency authorization.

“Some of the laboratories didn’t do their validation properly, making it impossible to tell if they had a good test or not,” Ms. Spaulding said. “Others included data that suggested the test did not perform well, likely missing far more positive cases than authorized tests.”

Other laboratories, she added, had manufacturing problems such as contamination. And several made unsupported claims in their labels for home testing.

With the new change, the agency would not find out about these problems. Under the policy, the F.D.A. retains the power to give emergency authorizations to companies that voluntary apply for them. The agency may also attempt to institute new rules for these tests, but would have to go through a cumbersome formal review process first. Such rules are subject to White House approval.

The new policy covers tests developed by laboratories certified under the Clinical Laboratory Improvement Amendments program, which is part of the Centers for Medicare and Medicaid Services. It does not change the requirements for tests that are made and marketed by companies to be sold off site, such as the rapid point-of-care tests for the coronavirus.

“We really think a new, overarching, modernized regulatory framework for all diagnostic tests” is important, she said.