Health officials are warning doctors to more closely monitor patients with severe lung damage caused by vaping, because some have relapsed or died shortly after being sent home from the hospital.

The recommendations are part of four new reports about the nationwide outbreak of severe illnesses from vaping, which has hospitalized 2,506 people and killed 54 as of Dec. 17. The reports were published on Friday, two by the Centers for Disease Control and Prevention, and two by The New England Journal of Medicine.

In the new reports, researchers pinpointed the beginning of the outbreak to early June, and said that evidence was mounting to connect the illness to vitamin E acetate — an additive to the illicit THC-based products that most patients have vaped.

The C.D.C. is confident that vitamin E acetate was “strongly linked” to an explosive increase in cases last summer, Dr. Anne Schuchat, principal deputy director of the agency, said at a news briefing on Friday.

But she and other health officials warned that even if THC suppliers stopped adding vitamin E acetate, that would not necessarily make illicit THC safe, because providers could switch to other dangerous substances. Sellers use additives to extend the THC and increase their profits.

The C.D.C. is still recommending that people avoid vaping nicotine, because it may also contain unknown additives that may not be safe.

Separately, the Food and Drug Administration announced on Friday that 44 websites had been seized by the agency and the Drug Enforcement Administration for marketing illicit THC vaping cartridges. By seizing the sites, the agencies basically shut them down.

The F.D.A., which has been investigating the supply chain involved in the outbreak, said it did not have evidence directly connecting the lung illnesses to the sites, but had obtained information about some of them from patients and their families.

Although most of the lung injuries this year have been attributed to vaping products containing THC, the high-inducing ingredient in marijuana, the new research also suggests that nicotine vaping may be causing health problems in young people. One of the studies found that starting in 2017, long before the outbreak of severe illness, there was a gradual increase in emergency room visits for lung trouble by people using e-cigarettes, especially patients 10 to 19 years old.

The scientists said that the growing use of e-cigarettes by teenagers may have caused the increase in those visits to the emergency room. But Dr. Shuchat emphasized that the evidence was not clear and needed more study.

In the outbreak of severe lung damage, cases peaked in September. But new ones are still being reported every week — nearly 100 occurred from Dec. 10 to Dec. 17 — and more deaths are being investigated.

One of the new reports found that among 2,409 cases reported to the C.D.C. by early December, 31 patients had to be rehospitalized and seven others died after being sent home. Their median time to winding up back in the hospital was four days, and the median time to death after hospital discharge was three days.

Those rehospitalized were more likely than others to have a history of chronic conditions like heart disease, respiratory problems and diabetes. The ones who died after being sent home were more likely to be age 50 or older. 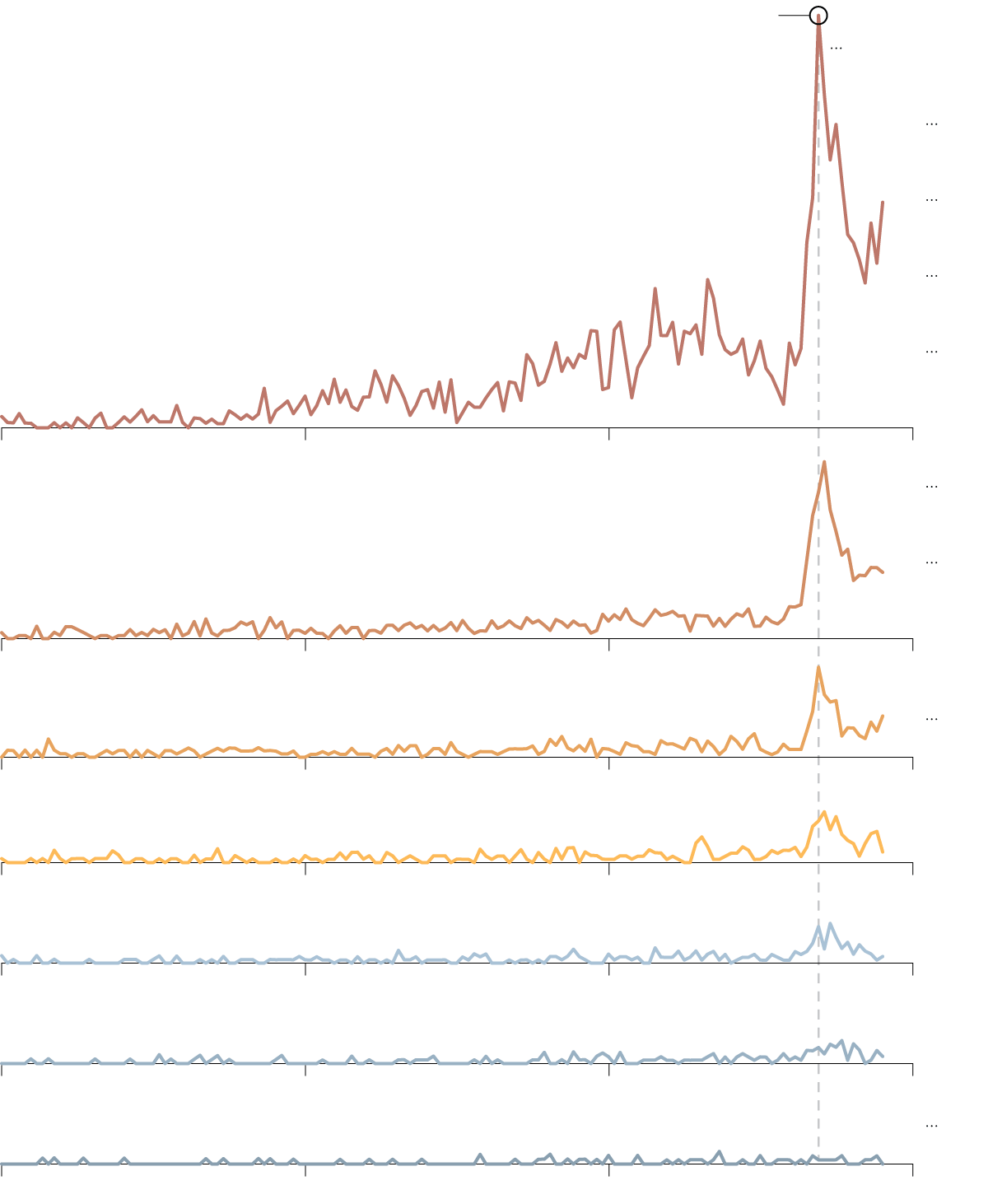 linked to vaping or e-cigarettes

linked to vaping or

Because of those cases, the C.D.C. is urging that patients who are sent home see a doctor within two days, which is sooner than previously recommended. The advice is especially important for people with underlying chronic illnesses, the agency said. It is also providing new guidelines for doctors.

It is not clear whether any of the patients who relapsed or died had started vaping again when they got home, Dr. Schuchat said, but she said that it was important for addiction counseling to start before patients leave the hospital.

She added: “I think it’s likely that there are a variety of factors here, and the medical conditions were particularly important.”

Another study addressed the lingering question of whether the outbreak, first widely recognized in August, was really a new illness, or actually something that had been going on for a long time without being detected.

The illness appears to be new: Cases spiked in early June, the researchers found, based on analyzing emergency-room visits reported to a database called the National Syndromic Surveillance Program, which was created to detect bioterrorism after the attacks on Sept. 11, 2001. They examined the reasons for visits, looking for mention of e-cigarettes, along with lung symptoms like shortness of breath and chest pain.

Why the surge occurred in June is not known, though researchers suspect it was because of increased use of vitamin E acetate, and other potentially toxic additives, by suppliers of illicit THC vaping products. Minnesota authorities who seized illicit THC vapes found that in 2018, 10 of 10 products contained no vitamin E, whereas 20 of 20 seized in September 2019 did contain it.

“I believe the practice of diluting THC vaping products with vitamin E really took off this past year,” Dr. Schuchat said, adding that the idea of using the vitamin additive had been promoted on YouTube and other social media platforms.

But how to explain the gradual increase in emergency room visits by young patients 10 to 19 years old starting in January 2017, well ahead of the outbreak? Though some cases could be linked to whatever later caused the severe illnesses, the researchers said the problems could also have been the result of the increasing use of nicotine e-cigarettes. Among high school students, the proportion who said they had vaped nicotine in the previous 30 days rose to 27.5 percent in 2019, from 11.7 percent in 2017.

A few years earlier, in 2015, the e-cigarette maker Juul had introduced nicotine salts, which make inhaled nicotine feel gentler on the throat and are more potent because they allow people to inhale higher concentrations of nicotine without discomfort. The ease of vaping with Juul’s wildly popular, sleek devices, and the addictiveness of high levels of nicotine could have led some people to vape more and more, exposing them to higher amounts of potential toxins like flavorings and to overdoses of nicotine, which can make people feel quite sick.

A study published in 2017 found increased rates of chronic cough and other respiratory problems in teenagers who vaped nicotine, including those who had never smoked cigarettes.

Research published last week on adults found that while e-cigarette users were better off than smokers, they were more likely than nonsmokers to develop respiratory disease. The risk was greatest among those who both vaped and smoked, which was common.

One of the new articles, published on Friday in The New England Journal of Medicine, strengthens the case against vitamin E acetate, reporting that it was found in lung fluid from 48 of 51 people with the vaping illness — 94 percent. Earlier research had made the same finding, but in a smaller number of patients.

The 51 patients came from 16 states, indicating that vitamin E acetate was in widespread use, and not from “just a single, local supplier of tainted products,” Dr. Schuchat said.

The new study compared the patients with 99 healthy people who had previously given samples of lung fluid as part of other research on smoking that involved nonsmokers, smokers and vapers. None of the healthy people had the vitamin E additive in their lungs.

Researchers don’t know how vitamin E acetate could harm the lungs, but they suggested two possible ways. It could disrupt a substance called surfactant, which helps keep open tiny air sacs deep in the lungs and is essential for normal breathing. A second theory is that the heat of vaping could break down the vitamin E acetate into ketene, a dangerous molecule that might produce the kind of chemical burns found in the lungs of some patients.

Both ideas need more study and testing in animals, the researchers said.

The vitamin E acetate was first found in a THC-vaping product from a sick patient that was analyzed in August by scientists at the New York State Department of Health’s Wadsworth Center.

Since then, the center has found the substance in more than 100 THC samples, about 69 percent of all the THC vaping cartridges it has tested, David C. Spink, director of the organic and analytical chemistry lab, said in an interview.

Most of the samples are 40 percent to 50 percent vitamin E acetate, Dr. Spink said.

The lab has also tested six products marketed over the internet to dilute THC for vaping.

“They came in brown bottles, with nice, professional looking labels on them, but they didn’t have a list of ingredients,” Dr. Spink said.

Three of the six were pure vitamin E acetate.