Gary Schwitzer is the founder and publisher of HealthNewsReview.org.  He tweets as @garyschwitzer, or at @HealthNewsRevu. 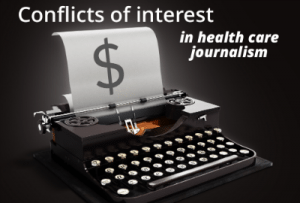 For the past 11 years, HealthNewsReview.org has helped journalists find industry-independent experts to use as sources in their stories.  It’s an effort begun by journalists Jeanne Lenzer and Shannon Brownlee (now a VP at the Lown Institute), but joined by me and Adriane Fugh-Berman, MD, of Georgetown not long after.

You can read more about the genesis of our list of industry-independent experts in this BMJ article if you have a subscription.  (Note to BMJ: This shouldn’t be behind a paywall.) Or read our backgrounder on this website.

Many journalists have asked us for access to the list – for example, recent requests from journalists for Forbes, Houston Chronicle, Science magazine, STAT, USA Today, and a web section editor for the Association of Health Care Journalists.

Members of our list recently made news themselves by publicly objecting to undeclared drug company funding of the National Partnership for Maternal Safety.  The Partnership published recommendations that would greatly expand the use of blood-thinning drugs in women who had c-section deliveries. Critics said that the recommendation “would cost as much as $ 130 million and would expose thousands of women to the risk of severe bleeding and other side effects.”  The Lown Institute wrote about the episode.  It took three years for the journal of the American College of Obstetrics and Gynecology – which published the conflicted recommendations – to add a correction about the conflicts of interest.

It is one small but significant example of individuals taking a stand against undisclosed conflicts of interest in health care.

A member of our list of industry-independent experts – Adam Urato, MD, Chief of Maternal-Fetal Medicine at the MetroWest Medical Center in Framingham, Massachusetts – helped recruit other list members to object to the initial recommendations.

Dr. Urato says the list was “immensely helpful,” and that “a lone voice might have been ignored, [but] 46 people joining together to call attention to this issue makes all of the difference… This type of effort by the list helps to call attention to the problem of corporate influence in medicine — and, ultimately, to help protect and inform pregnant women and the public.”

There are now more than 100 members of The List of Industry-Independent Experts. Our group continuously reviews nominations for new list members. In our most recent addition of names, the list members who recommended and endorsed the latest additions were leading voices on conflict of interest issues – Drs. John Ioannidis, Vinay Prasad and Teppo Jarvinen.   Here are the eight newest list members:

(Note: By mutual agreement between Dr. Frances and the list moderators, his application was withdrawn after questions were raised about his previous conflicts of interest which he said he did not want to respond to or revisit.)

Read More:  Dr Miriam Stoppard: If obesity was a ‘disease’ would it help weight loss?

You can also listen to a 2017 podcast we produced about The List of Industry-Independent Experts.