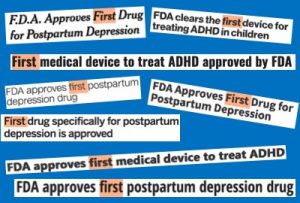 Spot the word “first” in a headline and you might assume a major milestone has been reached. Think first person on the moon, first woman on the Supreme Court.

But in health care news, things heralded for being first might not amount to a clear advance for patients. Take two recent FDA announcements that made a splash despite weak evidence that they really help people.

In March the FDA announced its approval of a “first treatment for post-partum depression.” Many stories parroted the “first” framing of an FDA news release:

A few weeks later, some headlines mimicked an FDA news release about the agency’s first green-lighting of a device to treat kids with attention-deficit/hyperactivity disorder (ADHD):

So what’s the problem here?

Showering attention on a treatment because it’s a first can shift the focus from what matters: how well it actually works.

Uncertainty gets brushed over

That’s what happened in the coverage of the postpartum drug, brexanolone, which is marketed as Zulresso. The Times was the only mainstream news organization story that I saw that reported meaningful outcomes data, and that was near the end of a 38-paragraph story.

Many stories ran with sensational language like “breakthrough,” “game-changer,” and “historic.” The Washington Post referred to it as a “major advance.”

CNN anchor Erica Hill mentioned the FDA’s designation of the drug as a “breakthrough therapy” without explaining that the FDA’s use of the word “breakthrough” has an entirely different meaning than the dictionary definition. (We’ve written about how news stories can contribute to public confusion over the FDA definition of “breakthrough.”)

There were ubiquitous interviews with a Connecticut mother who raved that the drug quickly made her feel like “a cloud was lifted.” Despite all the reporting power of NBC, ABC, CBS, CNN, and the Times, all five featured this same woman, who was undoubtedly made available to reporters by the drug maker’s PR engine — a classic case of “tyranny of the anecdote.”

For the most part, coverage bemoaned barriers such as the drug’s high cost and the need for a multi-day intravenous infusion. It didn’t delve into the skimpy evidence of a benefit or concerns about whether the drug can be safely administered outside of a carefully controlled trial.

Some news organizations, including CNN and NBC, misleadingly reported that the drug was effective for a majority of women who took it.

What the evidence shows

If more journalists had examined the drug’s published phase 3 trial data, they might have highlighted points like this:

Read More:  Americans Lost Future Life-Years in 2020: How Much Life Was Lost Depends on the Color of One’s Skin

Concern that women might pass out and hurt themselves or their babies was barely mentioned. Five patients who got the drug, or four percent, lost consciousness during the infusion. Adverse events were more common in the group that took the drug and included headaches, dizziness, nausea, infusion site pain, sleepiness, and fatigue.

‘Potential for unintended side effects’

It was drug safety advocate Kim Witczak — not journalists — who raised some of the toughest questions about brexanolone, such as: “Will it be a game changer for new mothers or just another marketing travesty?”

In a blog post for the website Mad in America, which bills itself as a “catalyst for rethinking psychiatric care in the United States,” Witczak said journalists didn’t sufficiently report safety concerns expressed by members of an FDA advisory panel on which she served.

Those concerns prompted the FDA to require safety procedures, called Risk Evaluation and Mitigation Strategies (REMS), including that the drug be administered only to patients in a medically supervising setting. However, REMS programs lack teeth.

REMS programs are neither enforceable nor a guarantee of safety. As a member of the FDA Advisory Committee, I believe it’s our moral obligation to make sure that all drugs with this risk potential are scrutinized and held to a higher standard in the approval process. More research is needed before we can be sure that this is not just the latest in a long line of drugs offered to women as a quick fix with minimal efficacy and the potential for unintended side effects. I fail to see why scientifically proper studies cannot be completed prior to rollout of this new drug treatment, to ensure efficacy and safety. A rushed study process reinforces my concerns, especially when the company performing the studies is the manufacturer and there are no true checks and balances in the system.

The FDA’s framing of brexanolone as a “first” also obscured the fact that there are already treatments for postpartum depression, including psychotherapy and standard antidepressant drugs. The need for social supports for new mothers, which has been found to mitigate postpartum depression, went unacknowledged in the FDA news release and the bulk of news coverage.

Read More:  What You Need to Know About Melatonin

“It’s not like postpartum depression is a hitherto untreated condition,” said Adriane Fugh-Berman, MD, a family medicine doctor and director of Georgetown University’s PharmedOut project. She pointed out that while brexanolone is the first drug approved by the FDA specifically for postpartum depression, that fact is not what the agency should emphasize to the public.

Similarly, stories about the ADHD device largely characterized it as a breakthrough while downplaying slight evidence of a benefit.

The device was studied in just 62 kids who were randomized to the device or a placebo device for four weeks. That means only 32 children were tested on the actual device. They were assessed on a clinician-administered rating scale that included factors such as difficulty paying attention or regularly interrupting others. 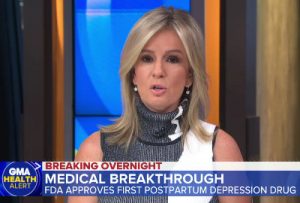 At the end of week four, the FDA said in its news release, the average score in the device group decreased from 34.1 points to 23.4 points, versus a decrease from 33.7 to 27.5 points in the placebo group.

Susan Molchan, MD, a geriatric psychiatrist and one of our longtime reviewers, suggested in an email that patients are not helped very much by being told that the device is first on the market.

She pointed out that ADHD drugs are typically tested for at least 12 weeks: “Four weeks is such a short period of time. If this was all it was approved on, it points out how pathetic our device regulation system is.”

“If we knew it would be helpful, which we don’t, it would be great to have another option for treatment, especially a non drug one,” she said. “it’s just unfortunate our device regulation system is so weak that consumers really can’t ascertain from ‘approval’ that the device is any good.”

Some experts question whether the FDA should be calling out treatments as “first” in its news release headlines. Witczak described it to me as a “loaded marketing word” — like newest and latest — that might be used to sell a car.

Read More:  How To Identify A Superior TEFL Course

Steven Woloshin, MD, co-director of the Center for Medicine and Media at The Dartmouth Institute for Health Policy and Clinical Practice, co-authored research showing how using terms such as “breakthrough” and “promising” can inflate people’s beliefs about a the effectiveness of a new drug. It’s an impact that even extends to doctors.

He wrote in an email:

I think “first” is another example of marketing language finding its way into FDA communications — perhaps not as extreme as “breakthrough” but certainly along the same lines.  As a result, I expect the word “first” will magnify enthusiasm for drugs/devices and show up in media reports and, of course, ads. This is a problem because in general, “new” or “first” should be seen as a warning, not as a benefit: an approved new drug/device has gone through typically rigorous testing — but on small numbers of highly selected people for short periods of time.  Our understanding of the balance of benefits and harms evolves as more typical patients [such as those taking other medications or having other medial diseases]  take the drug.

European regulators recognize this uncertainty by requiring a black triangle symbol on communications about drugs that require additional safety monitoring, Woloshin noted. The National Academy of Medicine, formerly the Institute of Medicine, has endorsed the idea in the U.S.

The FDA news release on brexanolone described potential harms but did a poor job of helping people appreciate how well the drug works, he said. For example, it offered no data on how much depression scores changed for new moms in the trials, or the percent who were no longer classified as depressed after treatment.

Instead, the release stated that the drug “demonstrated superiority to placebo in improvement of depressive symptoms at the end of the first infusion. The improvement in depression was also observed at the end of the 30-day follow-up period.” Those vague descriptors popped up repeatedly in news stories.

While some medical experts say “first” doesn’t aid public comprehension, the FDA seems enamored with that framing. By my count, the agency used “first” in 14 headlines so far this year. That’s on pace to exceed last year’s total of 37, which was up from 30 in 2017 and 20 in 2016.

Woloshin suggested that’s a trend in the wrong direction: “I think the way forward is for FDA — and journalists — to avoid marketing terms, to clearly summarize AND quantify key benefits and harms, and remind everyone that when it comes to drugs and devices, first or new should generally be seen as a red flag to heighten caution rather than enthusiasm.”