White people have the LOWEST life expectancy of any ethnic group in England and Wales, finds first official report of its kind

White people in England and Wales have the lowest life expectancy of any ethnic group, a major report has found.

Caucasians were also more likely to die from cancer than any other groups between 2011 and 2014, according to the first study of its kind by the Office for National Statistics.

The life expectancy of white female Britons was 83.1 years, while men were expected to live for 79.7 years.

Researchers said higher cancer rates among white people, as well as the increased likelihood of them drinking alcohol and smoking, bumped them down the mortality list. Cancer deaths were lowest among Indian, Pakistani and other Asian groups.

Low heart disease rates among black people and higher proportion of recent migrants in some ethinc groups pushed their life expectancy up, as people who migrate tend to be healthier than others, according to the ONS.

But the experts noted that mortality rates changed significantly during the Covid pandemic, which disproportionately affected black and Asian ethic groups. 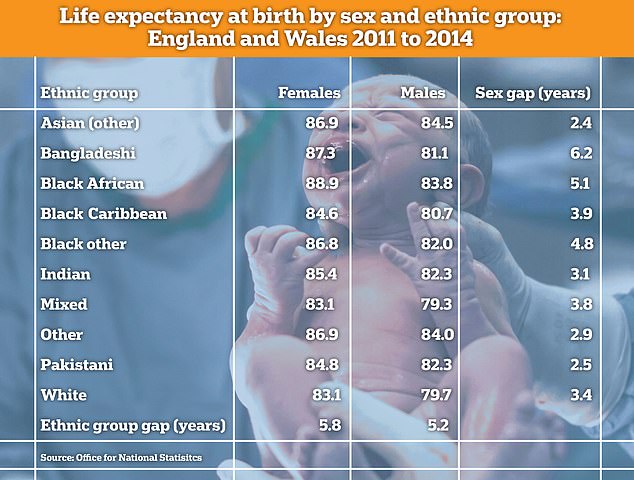 Researchers found white women lived for just 83.1 years, while men lived for 79.7 years – the shortest of the 10 ethnic groups studied. Meanwhile, people in the ‘Asian other’ category,  which includes anyone who is not in the Bangladeshi, Indian and Pakistani groups, had the highest life expectancy of 86.9 years for women and 84.5 years for men 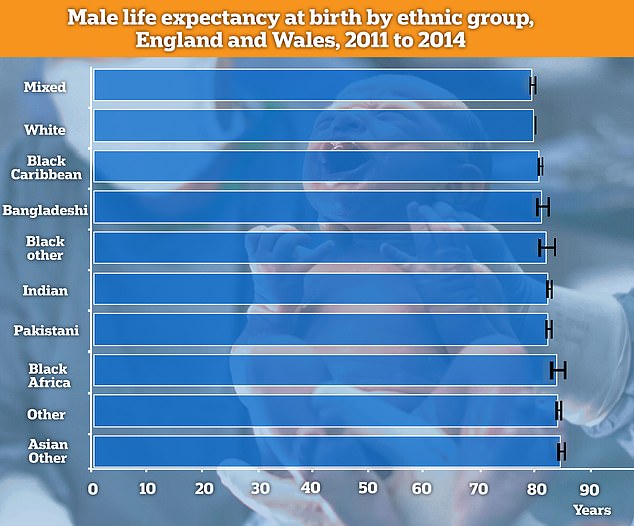 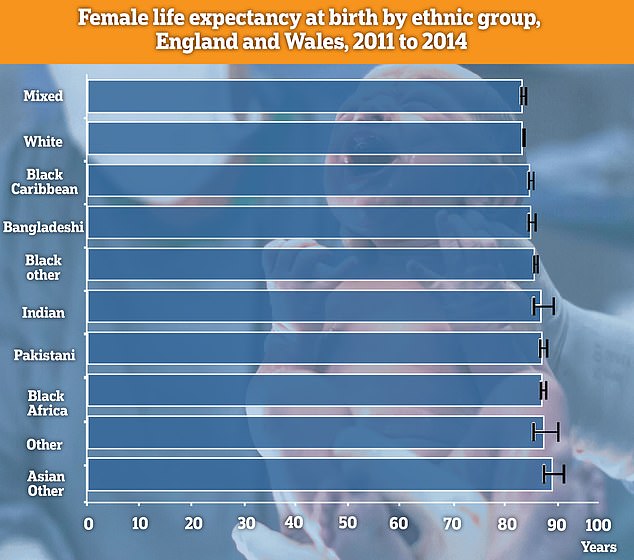 Read More:  The Writer's Mind-boggling Conundrum About To Be Solved?

Among women, mixed, white and black Caribbean people had the shortest life expectancy

The ONS used data from the 2011 Census – a self-reported survey of the UK population – as well as 1.3million death registrations from 2011 to 2014 to estimate how long different ethnic groups lived for and their causes of death.

The study aimed to determine and improve health in different ethnic groups and find out where further analysis is needed.

Researchers found white women lived for just 83.1 years, while men lived for 79.7 years – the shortest of the 10 ethnic groups studied.

Men in ‘other’ groups – which the ONS said includes Arab and Chinese people – were predicted to live to 86.9 years, while women for 84 years. Pakistani individuals had the second-worst mortality rates, with males living to 84.8 and women to 82.3.

But the proportion of deaths these conditions are responsible for varies between ethic groups, with the figure jumping to 64.7 per cent of all black Caribbean men who died, while it dropped to 55 per cent for the ‘mixed’ ethinc group.

White men had the highest chance of dying from cancer, with 382 per 100,000 dying from the disease.

Meanwhile, men in the ‘Asian other’ category had half the risk of dying from cancer, with it killing just 175 men per 100,000.

Among women, white females were most likely to die of cancer (265), followed by mixed- race (243), while Indian women were the least affected (144). 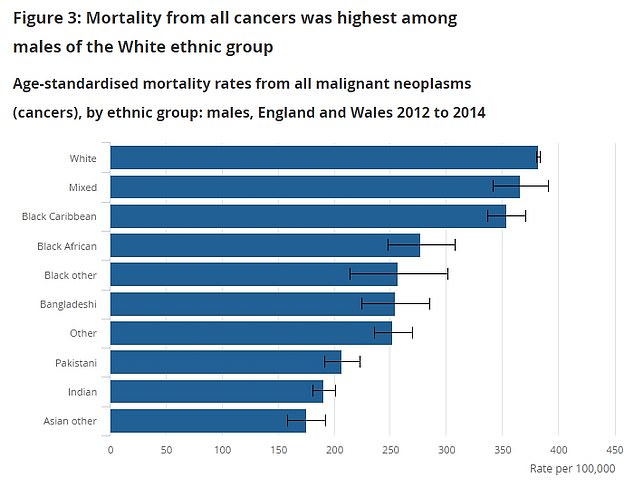 Read More:  Seedsman Review: Is It Legit And The Best Seed Bank in 2021? 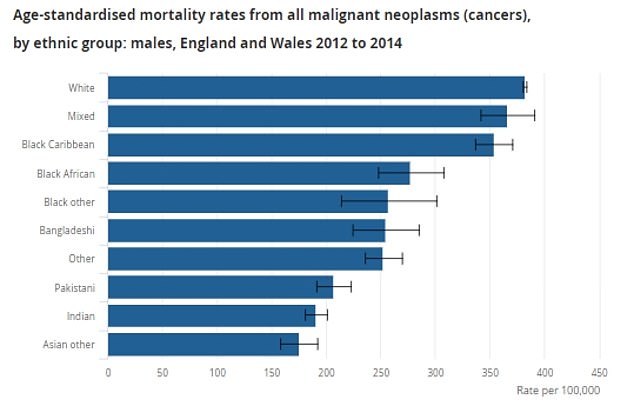 Cancer was most likely to kill white men and women, while certain Asian groups were least at risk from the disease 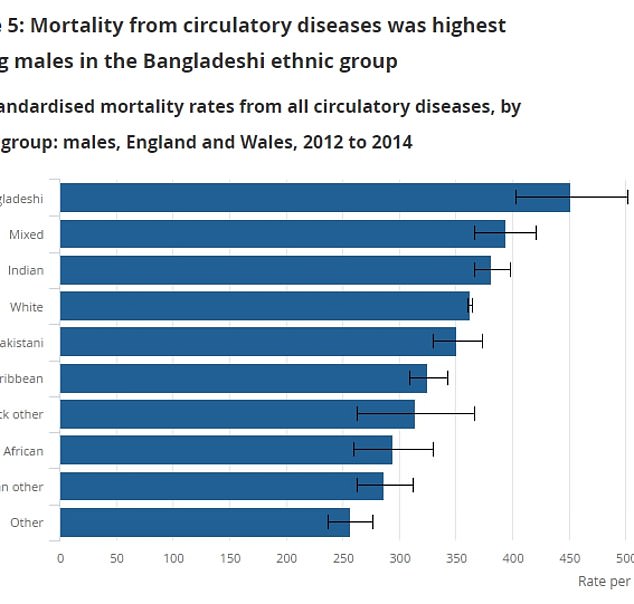 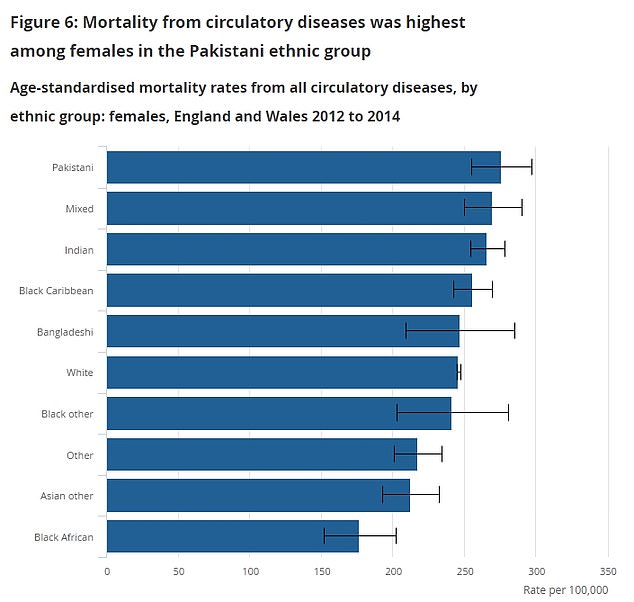 High Covid death rates in the North West has caused the life expectancy of men and women in the region to decline by a combined 2.8 years, a study has found.

A report published last month by the University College London found a high Covid mortality rate and deprivation contributed to a decline in life expectancy in the North West region, which was larger than the average in England.

The report also found that people in Manchester were 24 per cent more likely to die from Covid than the rest of England.

Professor Sir Michael Marmot, director of the IHE, said the figures are ‘jaw-dropping’.

The area’s high death rates and ‘particularly damaging long-term economic and social effects’ will damage health and widen health inequalities unless action is taken, he said.

His report proposes that the government should invest in jobs, housing, local services and education to tackle these long-term problems.

Brain disease was most likely to kill Bangladeshi men and women, compared to all other groups.

Black carribean and ‘black other’ ethnic groups were the most at risk of dying from hypertensive disease, which are disorders linked with high blood pressure.

Deaths from diabetes were lowest in white people, but the condition was most likely to kill Bangladeshi and Pakistani people.

White and black Carribean women were most at risk from breast cancer, while prostate cancer was most likely to kill black Caribbean and black African men.

The ONS noted that its life expectancy findings are higher than data it previously published, so it may have slightly overestimated its figures.

Julie Stanborough, deputy director of health analysis and life events at the ONS, said: ‘Further research is required to investigate the reasons for the differences.

‘However, these results reveal important patterns in life expectancy and mortality by ethnic group which are complex, but nevertheless consistent with most previous studies.’

Potential explanations for differences could be past migration patterns, the socioeconomic composition of the groups, health-related behaviours and clinical and biological factors.

The ONS said black African and ‘Asian other’ groups likely had the highest life expectancy because they contain the highest proportion of more recent migrants. Previous studies found that migrants are healthier than other groups, it said.

Asian and black people are less likely to engage in harmful behaviours like smoking and drinking alcohol, the ONS said.

The relationship between deprivation and health is ‘well established’, but more research is needed on how this relationship applies to different ethinc groups, the ONS said.

Researchers noted that the coronavirus pandemic contrasted with its mortality findings for other causes, as the virus has killed more Bangladeshi and Pakistani people, as well as black Carribean men.