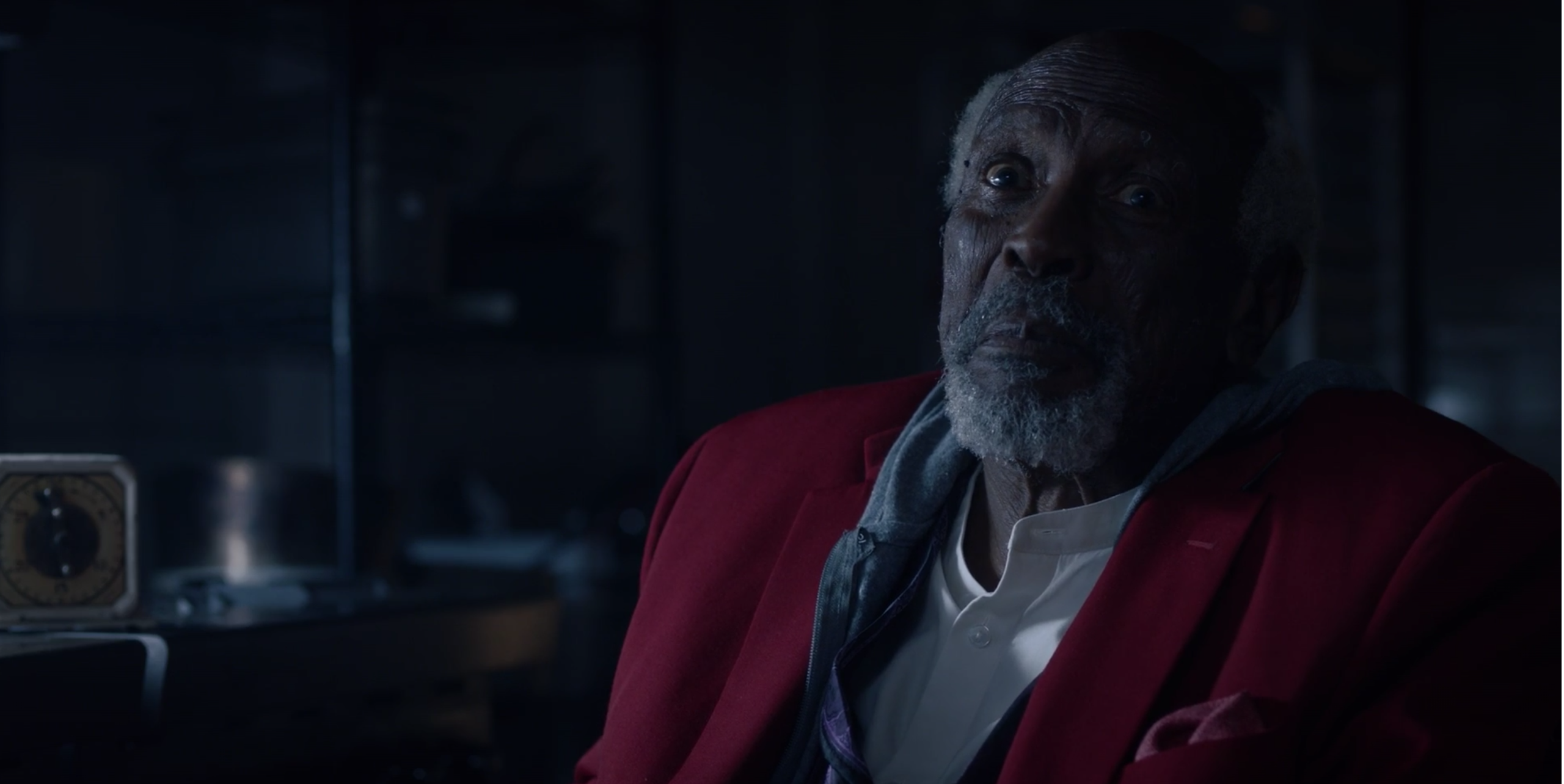 Spoiler Warning: If you haven’t watched Episode 2 of HBO’s Watchmen yet, now’s your chance to stop reading—the rest of this post will be filled with spoilers.

There’s a lot of mystery happening so far on HBO’s Watchmen. Even once you get past the police officers wearing masks and interrogating people in pods, Robert Redford’s presence as the President of the United States (and subsequent lingo), and, well, whatever is happening with Jeremy Irons’ character, perhaps the biggest mystery of all comes with 105-year-old, wheelchair bound, Will Reeves (Louis Gossett Jr.). We’ve seen him in eras nearly 100 years apart, and have no idea what his motivation is in either one.

This week, Angela took Will into her own vigilante custody after finding him beneath the hanging, dead body of her friend, Chief Judd Crawford. Angela kept him around the entire episode, taking a dab of his DNA to get a hint about who he is—and the result was a stunning one that we’ll surely get to the bottom of in the next few weeks; Will is Angela’s grandfather.

And, well, just after Angela learned of her link to the mysterious senior, and then decided to arrest him for Judd’s murder (must’ve been some emotional roller coaster), she took him outside, put him into a car, and, uh… a flying saucer picked the car up with a magnet and flew away, as Will smiled. I guess he wasn’t lying earlier when he mentioned his “friends in high places.”

Read More:  You can now buy freezable bra pads to stop your boobs sweating in this heat

The way Will is being presented is so incredibly unique and interesting. We know his backstory—he’s the little boy from the opening of the series. He’s been directly impacted by both the , and the preceding message to the Black American soldiers from the German army, which we saw at the start of episode two. We saw last week that he was somewhat scoping Angela out, lingering outside her “bakery” and having at the very least something to do with Judd Crawford’s death.

But what is his involvement? A betting man would say that at some point, he got turned and brainwashed into some off-kilter group; after all, the “Watch Over This Boy” sheet that he was left with was written on the back of the German propaganda that was dropped from the sky. For all we know, his father may not have believed a word of it, but it might have been the closest piece of paper around at a time when he needed something to write on. Nonetheless, as Will grew up, he could have read that pamphlet and taken it to heart, eventually siding with some group that believes the same thing as those germans—the Seventh Kavalry, perhaps? It’s not sure exactly where, but as we saw from Will’s “friends in high places,” there’s much more that we don’t know. And Angela is going to be involved.

Given Will’s age (he says he’s 105) it’s also a clear possibility that he could be one of the original Minutemen from the Watchmen comic. The series roughly takes place 30 years after the comic, and in the comic all of the original minutemen—including the Hollis Mason Nite Owl and Hooded Justice—are supposed to be around retirement age. Episode 2 also coincidentally takes us inside the show’s American Hero Story, which specifically paints the origin story of Hooded Justice, the masked hero who wears a noose around his neck. Could this be Will? We’ll surely find out.

It’s hard to take any sort of concrete guess at what Will’s angle is right now; we simply haven’t gotten enough evidence in any way or the other to take any real stab. But it’s also important to note that it’s probably that he knows a lot more than he seems to be letting on, too. When thinking about what we can trust as viewers, it’s important to keep in mind who we’ve seen certain characters interact with. In Will’s case, we’ve only seen him share the screen with Angela and Judd’s dead body, and then get lifted off by a flying saucer into the oblivion.

Will’s plan should gain some clarity in the next few weeks—his story as of now seems pivotal to where Watchmen’s plot is going.